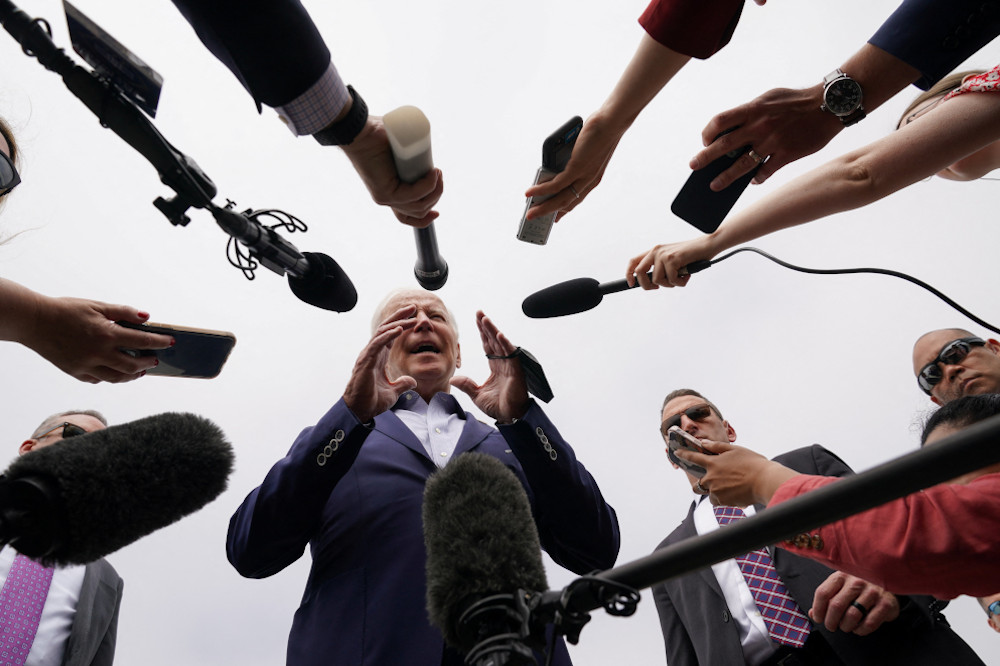 President Joe Biden speaks to reporters June 11, 2022, after attending the Summit of the Americas in Los Angeles. (CNS/Reuters/Kevin Lamarque)

Twenty countries from the Americas, including the United States, signed a declaration June 10, the last day of the troubled Summit of the Americas, committing to help and protect "all migrants, refugees, asylum-seekers, and stateless persons, regardless of their migratory status."

The statement released by the White House and signed by the heads of state of Mexico and several countries in Central and South America said that "migration should be a voluntary, informed choice and not a necessity," and it makes the task of aiding migrants and refugees a shared responsibility among many nations.

The effort asks that countries such as Costa Rica and Ecuador, with proximity to nations such as Cuba and Venezuela, take in and protect more refugees from those neighboring nations instead of having them make longer and more dangerous trips north to the U.S.

The U.S. in turn would seek funding for those countries to help refugees enter legally, to provide social services as well as "integration programs" so they can stay there, saying such a move "would benefit host communities that have generously opened their doors to the most vulnerable."

Mexico said it would integrate 20,000 "recognized refugees into the Mexican labor market over the next three years."

But some wondered how the agreement would work given that a lot of migrants want to head north to the U.S., but also wondered whether other countries would keep their end of the bargain.

A day after the declaration, the Mexican National Institute of Migration announced it had disbanded a large group of 6,000 to 7,000 migrants headed toward the U.S.-Mexico border wanting to call attention to those who had gathered for the summit,

Some migrants told reporters that they were dissuaded by Mexican authorities from continuing their journey and felt they were being encouraged to return to their home countries. The Associated Press reported June 11 that the Mexican immigration agency had issued documents to stay in Mexico for up to 7,000, valid for one month, at which time migrants could apply for more permanent stay in the country or return home.

The United Nation refugee agency said June 10 that it welcomed the agreement known as the Los Angeles Declaration.

"The Americas region is facing a human mobility crisis that is unprecedented both in its complexity and scale. No country can address this situation on its own," said U.N. High Commissioner for Refugees Filippo Grandi.

"The Los Angeles Declaration builds upon existing frameworks," he continued, "and brings us closer to a continent-wide coordinated response based on the principles of international cooperation, solidarity and respect for human rights, as set out in the (U.N.) Global Compacts on refugees and on safe and orderly migration."

The immigration deal sprinkled one of the few positive notes at the gathering, publicly boycotted by Mexican president Andrés Manuel López Obrador, who reproached the U.S. for leaving out the leaders of Venezuela, Cuba and Nicaragua from the hemispheric gathering.

The heads of state of Guatemala, Honduras and El Salvador, three countries who have high migration rates to the U.S., were among those who also declined to attend but signed the agreement.