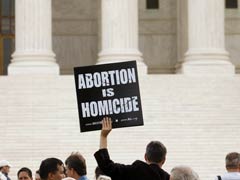 A pro-life demonstrator holds up a placard outside the U.S. Supreme Court in Washington in October 2008. (CNS/Reuters/Kevin Lamarque)

Theologian Fr. Charles Curran has made a valuable contribution to the national conversation about abortion with his recent lecture arguing that the U.S. Catholic bishops’ approach to changing the law is deeply flawed. (Read the text of Curran's talk.)

Curran termed his lecture at Southern Methodist University in Dallas, where he now teaches, “A Critique from Within the Church,” a claim that some scoff at because in 1986 the Vatican revoked his license to teach theology at The Catholic University of America in Washington for taking issue with some church teachings regarding birth control and other cultural issues.

That satisfies the journalistic requirement to note that Curran will forever drag a footnote along with him. A deeper look would show as much church politics as doctrinal debate involved in the matter (not to mention a certain late cardinal’s undying resolve to see Curran booted).

One result, of course, is that Curran’s questions then and now are rarely debated in the court of theological opinion. It’s much easier to make Curran the subject of debate. So the bishop of Dallas, Kevin Farrell, apparently felt no need to talk with Curran or read the content of his lecture before pronouncing his regrets that the theologian “has chosen to criticize” the position of the U.S. bishops (NCR, Nov. 12).

That’s unfortunate. Curran’s critique -- not of church teaching but of the bishops’ approach to changing law -- goes far in explaining why the bishops’ tactics have been largely unsuccessful in persuading not only the wider culture but also the very Catholics they claim to shepherd.

Their approach has not worked because the thesis upon which the strategy is based is flawed. It relies on certitude about when life begins that the bishops insist exists, but that even modern church teaching admits does not. In matters of abortion, the bishops have approached the political arena as if it is required to bend to their will and the conclusions of their faith when virtually everyone knows that a pluralistic society is not governed that way.

Indeed, argues Curran, the church has more certitude when it comes to issues of adultery, murder or torture than it has in its long history of teaching about abortion.

Curran has provided Catholics with both the rationale and the language for exercising and explaining their prudential judgment when it comes to selecting political candidates. It is long overdue that someone lead the way through the artificial and disabling division that can occur when our politics is unnecessarily split by our religious leaders into two irreconcilable camps. To be antiabortion is not always to be pro-life, and to favor an incremental approach to changing abortion laws and to lowering the number of abortions is not always a capitulation to the vaunted “culture of death.”

Discarding a flawed and failed political approach could bring the day when Catholics of all persuasions come together anew with fresh moral vigor on behalf of life, beginning with protection and nourishment for the unborn.

What to do about abortion laws? An NCR online discussion

Abortion debate must consider 'freedom of the person' by Charles E. Curran Feb. 23, 2011

Trump slips on his own ego in first debate

Pelosi, Niederauer meeting to spur debate, resolution or both?