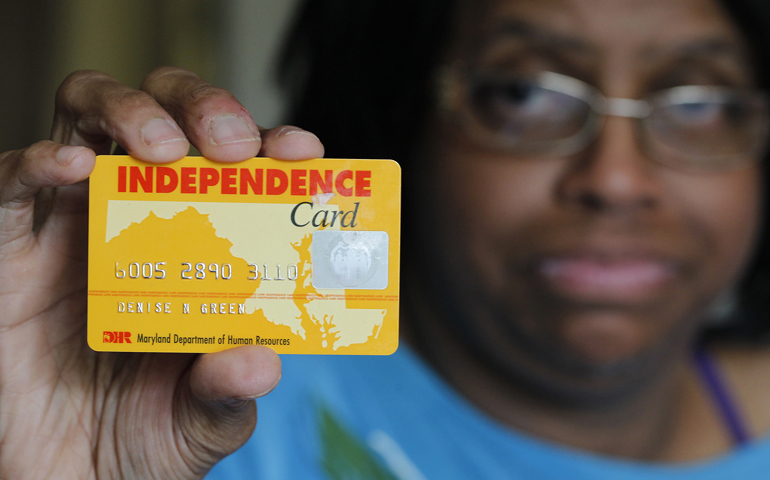 Denise Green displays her "Independence Card," which is issued by the state of Maryland and holds federal SNAP benefits, at her home in Silver Spring, Md. She purchases her food with help of the Supplemental Nutrition Assistance Program, or SNAP. Green worries that she and others will be affected by House members' decision in mid-July to pass a farm bill without funding for nutrition programs. (CNS/Bob Roller)

As Congress lurches toward its summer recess, inside and outside the corridors of Congress, people have been asking, "What in Sam Hill is going on with the House on the farm bill?"

"It's anachronistic, unworkable," said Bob Gronski, a policy adviser for the National Catholic Rural Life Conference, about a decision by members of the House to abandon nutrition items in the farm bill, saying they will deal with food assistance programs later. "The message that sends is: 'I don't understand what the House is thinking.'"

"It is a very confusing, misguided and dysfunctional process," said Roger Johnson, head of the National Farmers Union.

"In my 25 years of working of working on farm issues, this has been a really different way of how lawmakers are acting," said Kathryn Ozer of the National Family Farm Coalition.

"Getting food to the people who need it is problematic. I do believe we're the kind of country where we do take care of the people who are in need," said Armando Nieto of the Community Food and Justice Coalition. But "there is a segment of Congress that doesn't believe it, that it's just not the role of government" to feed the hungry, he said. "We've got to change it (and) the conversations are not even happening."

To recap, summer had barely begun when the farm bill surprisingly went down to defeat in the House. The House version would have more the quadrupled the cuts in the Supplemental Nutrition Assistance Program -- formerly known as food stamps -- that had been in the Senate-passed version of the bill.

Then, on one day's notice, House Republican leaders reintroduced a stripped-down, agriculture-only farm bill, yanking out the funding for nutrition programs like SNAP and saying they'd develop a separate bill later on nutrition. The stripped-down bill was approved by an eight-vote margin, 216-208, with votes cast largely along party lines.

And although House leaders said they would not take their bill to the Senate for a conference committee to reconcile the two versions, they reversed course July 16 and did just that.

Observers are trying to figure out what such a bill would look like once it is reported out of committee for a vote. Would it contain nutrition program funding or not? How deep would it cut nutrition funding, assuming such funding is in? Would the House pass a conference-compromised bill starkly different from the bill it passed? What about the Senate? Then there's the matter of President Barack Obama signing the bill; aides said the day of the House vote that he'd veto any bill resembling the House's version.

"It's not just nutrition," Gronski said. "We want to stay arm in arm with our anti-poverty, anti-hunger groups. It makes no sense if the House leadership says it's going to come up with a nutrition bill separately. Why not keep it all together like it was? It just doesn't make any sense to some people's minds."

The number of people may be more than "some." Just as more than 500 groups had signed on to a letter urging the House not to decouple nutrition from agriculture in the farm bill, a similar effort was recruiting groups in mid-July urging Congress to pass a "full and fair" farm bill.

"A full and fair farm bill must include farm, food and nutrition, conservation, commodity and crop insurance reforms, and rural economic development programs," the letter said. "It must also provide renewed and enhanced funding for the now-stranded but critical subset of programs that assist the most chronically underserved segments of agriculture and our rural and urban communities."

Gronski said the rural life conference was likely to sign on to the letter, which was circulated by an organization calling itself GOAT, short for Getting Our Act Together on the Farm Bill.

"The House Republicans are pushing very deep cuts in SNAP," said the Rev. David Beckmann, a Lutheran minister who heads Bread for the World, a Christian citizens' anti-hunger lobby. "The $20 billion cut that the House Agriculture Committee recommended is equivalent to doing away with half the food charity in the country for the next 10 years. ... And that wasn't enough when it came to the floor. They passed amendments that could cut more deeply."

Beckmann said another nutrition-related item is a victim of the bifurcated farm bill: international food aid.

"Both (former President George W.) Bush and Obama have pushed for reform, basically to allow for more flexibility to buy food nearer (to) where it's needed rather than ship it," he said. "This time, when that amendment came to the floor of the House, that would allow our food aid program to reach more of the world's poorest people, and provided higher quality food and more timely assistance at no higher cost to the U.S. taxpayer, it was opposed by special interests who benefit from the current system."

"Lots of people say we publicly have been concerned about the damage that we may be doing to the coalition that cares about hungry people and folks who care about farmers and the safety net, and folks who care about the environment. That's been the three-legged stool" propping up much of the farm bill's longstanding coalitions, said the National Farmers Union's Johnson. "Yeah, there's been a lot of stress among those interest groups, but now those groups aren't generating it, it's being generated from the political process in the House."

Predicting the future of the farm bill and nutrition funding is dicey given the recent past.

Gronski said, "The Senate's not going to stand for the level of cuts in the House bill." The Senate version, which he added was "not perfect, either," OK'd $5 billion in nutrition funding cuts compared to the $20 billion in the first, failed House bill.

But Bread for the World's Beckmann foresaw a more positive outcome despite the spate of recent evidence.

Noting that aid to the poor was cut just 1 percent by budget sequestration measures while other area were hit harder, he said, "It make me optimistic that we'll be able to pass (international) food aid reform in 2014."

As for the SNAP cuts, Beckmann said GOP budget-slashers "tied it up in knots so much that nothing's going to happen this year."

"A lot of this depends on people of faith. We have to write them (members of Congress) and say, 'I don't want you to cut food stamps,'" he added. "It means that good Catholics need to rally around and make sure the Democrats don't cave."