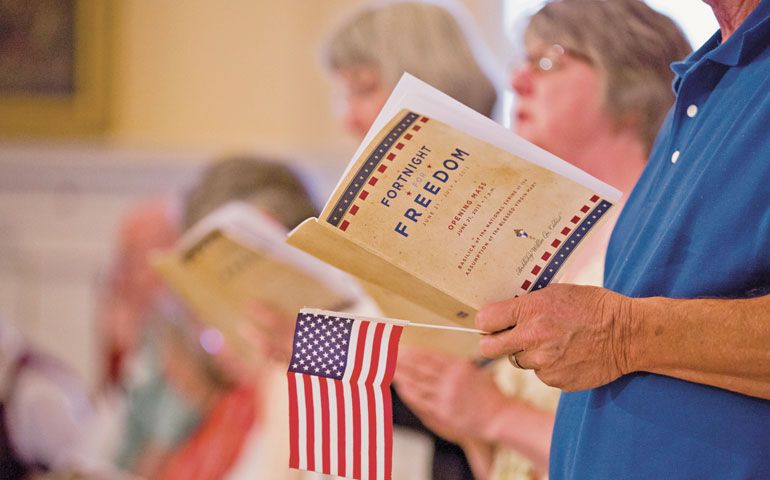 A man attends the opening Mass for the second annual Fortnight for Freedom observance June 21 at the Basilica of the National Shrine of the Assumption of the Blessed Virgin Mary in Baltimore. (CNS/Thomas McCarthy Jr.)

In his game-changing interview with an Italian Jesuit journal, Pope Francis spoke of the imbalance in the Catholic church's engagement with the public square created by the current pastoral "obsession" with gay marriage, abortion and contraception. But it's important to identify a related concern that is also out of balance: the conscience and religious freedom campaign pushed in recent years by a group of leading American Catholic bishops. Francis himself in the last months has pointed the way in word and deed toward a better balance on such topics. In communications large and small, he has evoked far more positively than did Pope Benedict XVI the significance of freedom of conscience in itself as the open-ended place where "the dialogue with God is given." Will the Catholic bishops in the United States follow his lead?

To see more clearly the problem of imbalance undermining the bishops' campaign, we can ask: What is the purpose in Catholic social doctrine of the right to religious freedom?

The Declaration on Religious Freedom affirms both purposes: The free act of faith is to be the basis for the full proclamation of the Gospel. Of course, for centuries, the church had both taught that the act of faith was to be free and had insisted, in the face of civil power, on the freedom of the church. But the great step forward in Catholic thought represented by the Declaration on Religious Freedom was especially embodied in the first purpose of the right to religious freedom: the protection of the freedom and responsibility to believe or not.

More clearly than the hierarchical church had done before, the conciliar document based this fundamental purpose on personal dignity understood as the worth derived from "being endowed with reason and free will and therefore privileged to bear personal responsibility." An individual Catholic may seek to live out "true freedom" in civil society. The hierarchical church as a body of believers may demand the freedom to do the same thing in public space. But neither mode of witness would fulfill the intention of the declaration unless the fundamental purpose of the right to religious freedom was also observed: the respect for its own sake of the freedom to believe or not at all and to act accordingly.

Archbishop Charles Chaput of Philadelphia articulated the problematic logic behind the bishops' religious liberty campaign. "The purpose of religious liberty is to create the context for true freedom," he said in his 2012 homily at a "Fortnight of Freedom" Mass organized in support of the campaign. "Religious liberty is a foundational right. It's necessary for a good society. But it can never be sufficient for human happiness. It's not an end in itself. In the end, we defend religious liberty in order to live the deeper freedom that is discipleship in Jesus Christ."

Here we can see a subtle but significant shift from the logic of the Declaration on Religious Freedom. In the conciliar document, the respect for human dignity that is the basis of the right is an end in itself. The right so understood belongs to all people -- Catholic, lapsed Catholic, Muslim, Jew, atheist and more. But, in Chaput's homily, the right is not an end in itself; he says so explicitly. Instead, the right is instrumental: Its real value lies not so much in the freedom to believe but in the "deeper freedom that is discipleship in Jesus Christ."

Here Chaput has introduced a tiered, imbalanced justification of religious liberty in civil society. The devoutly religious are more entitled to it than anyone else. The Catholic valuation of religious liberty has its basis more in the particular, Christian nature of discipleship than in the general, universal claim of human dignity. And human freedom anyhow, apart from Christian redemption, is pretty much a necessary but dissolute affair or, as the French poet Paul Claudel puts it (and as Chaput approvingly quotes in the homily), the Christian "alone has liberty in a world of slaves."

A final oddity is the diminished moral status of the employees of Catholic institutions like hospitals and universities who may wish to obtain coverage for contraception through their work-related health insurance. This oddity arises, of course, in the context of the central dispute between the bishops and the Obama administration over federal health care regulations pertaining to contraception. In the religious freedom campaign, the bishops understand themselves to have no obligation as a matter of morality or law to cooperate with employees seeking to engage in a practice considered immoral in official Catholic doctrine. As the old saying goes, error has no rights. But if freedom of conscience is more clearly affirmed as a matter of fundamental dignity, then it is possible to recognize the moral claim such employees have to make these decisions for themselves.

This does not mean that the bishops must immediately cooperate with moral practices of employees to which the church has objections (and this is especially the case with practices like abortion that involve an injustice to a third party). But it does mean that there is room to recognize and respect -- even if from a distance -- that employees have the moral prerogative to make such choices and that remote cooperation with these employees can be morally acceptable. The bishops are facing legitimate issues of religious freedom on a number of fronts. But the way to respond is not by a return to the days of error has no rights.

The great 20th-century theologian Redemptorist Fr. Bernard Häring proposed a better way for the church to promote religious freedom in a manner consistent with the letter and spirit of the Second Vatican Council. Häring argued that the church should not primarily seek freedom for itself -- a seeking that regrettably characterizes the bishops' religious liberty campaign -- but should instead consider itself a sacrament of the liberty and liberation of all. Thus the church must both seek its own freedom and proclaim the freedom of conscience of all, whether or not such freedom has any immediate connection to the church's doctrine or practice. In Häring's arguments, we see the balance missing from the religious liberty campaign of the bishops in which concerns for the freedom of the church subsume concerns about freedom of conscience.

No doubt behind the particular logic of the bishops' campaign are arguments advanced during the papacies of John Paul II and Benedict XVI that we live in a time of "extreme secularism" (as Archbishop William Lori of Baltimore recently put it) in which freedom of conscience in its own right is more or less code for what is thought to be the reigning anti-religious relativism of the present day. But this paradigm has run its course -- and, among other things, the wan effect of the bishops' campaign testifies to that fact.

Instead, it is time for the church to reconsider itself and the problematic of secularism in democratic societies. Such a reconsideration would give stronger normative status to freedom of conscience inside and outside of the church. It would respect more fully the great diversity of the visions of the good life that characterize such societies. And it would mean that the church would re-imagine its own freedom in civil society not as the freedom to witness to absolute truth in a culture of death (the model of the bishops' religious liberty campaign), but as the freedom to love in the boundary-crossing "culture of encounter" praised by Francis.

At Christmas, it's not the money that counts

During abuse crisis, follow Jesus to bring change to church