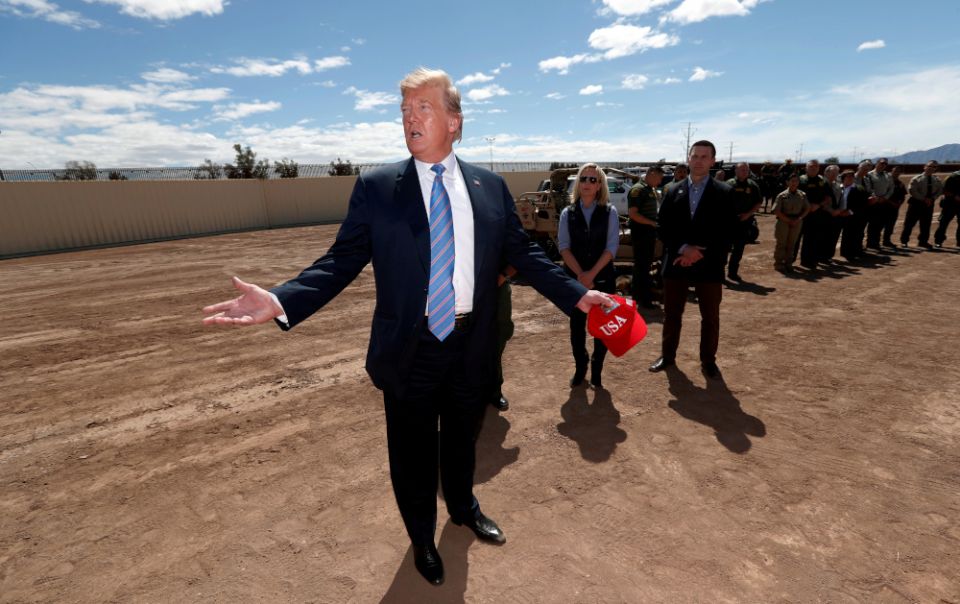 U.S. President Donald Trump visits the U.S.-Mexico border in Calexico Calif., April 5, 2019. Trump said May 30 that he would impose a 5 percent tariff on all imported goods from Mexico beginning June 10 to push that country to help stem the flow of immigrants coming across the border and entering the U.S. illegally. He said the tax would "gradually increase" until the flow of immigrants stopped. (CNS/Reuters/Kevin Lamarque)

Washington — President Donald Trump has threatened to impose tariffs on Mexico, whom his administration blames lately for an increasing number of immigrants at the southern U.S. border.

"We fully believe they have the ability to stop people coming in from their southern border, and if they're able to do that, these tariffs will either not go into place or will be removed after they go into place," said acting White House chief of staff Mick Mulvaney in a conference call with reporters shortly after Trump announced the move via Twitter late May 30.

"On June 10th, the United States will impose a 5% Tariff on all goods coming into our Country from Mexico, until such time as illegal migrants coming through Mexico, and into our Country, STOP," Trump tweeted. "The Tariff will gradually increase until the Illegal Immigration problem is remedied."

Earlier, Trump had said an announcement was coming "having to do with the border and having to do with people illegally coming over the border," adding that it would be "my biggest statement, so far, on the border. We have brought something to the light of the people. They see now it's a national emergency, and most people agree."

But it's hard to tell whether he was referring to the tariff announcement or something else.

Political news website Politico has reported that the administration is considering a plan to deny asylum to those who have lived in a country other than their own before arriving to the U.S. But by late afternoon on May 31, no announcement, other than the possible tariff increase, had been made. However, word of the possible new policy on asylum prompted some Catholic organizations, including the Sisters of Mercy of the Americas, to respond via Twitter.

"Cutting off access to #asylum for Central Americans would be a disastrous decision," the organization, based in Silver Spring, Maryland, said via Twitter. "These people are fleeing violence and poverty, and are in desperate need of respite. Instituting hardline policies like this will only exacerbate the danger they face."

Administration officials said the U.S. is facing a crisis and released figures that said officials May 29 apprehended a record 1,036 people trying to cross illegally near El Paso, Texas, and Acting Secretary of Homeland Security Kevin McAleenan told reporters during the conference call that the U.S. has more than 80,000 migrants in custody.

"This is an organized smuggling effort," McAleenan said, urging Mexico to take action.

Mexico, under President Andres Manuel Lopez Obrador, has enacted harsher policies for migrants passing through the country on their way north, including limiting their travel documents to the southern Mexican states and implementing large-scale deportations for those from Honduras, Guatemala and El Salvador, where the bulk of the migrants come from.

Mulvaney said if the flow doesn't stop, tariffs for Mexico could rise to 25 percent by October.

In a May 30 letter addressed to Trump and made public via Twitter, Lopez Obrador said he does not want confrontation and tells him social problems are not resolved by tariffs or "coercive measures." He reminded him of a long history of cooperation between the two countries and asked for a dialogue and to find alternative ways to solve immigration woes.

"Remember that I do not lack courage, that I am not a coward or fearful, but I act on principle," Lopez Obrador wrote in the letter.

Some Trump supporters, including Republican Sen. Chuck Grassley of Iowa, urged the president to reconsider the measure and questioned whether it was permitted.

"Trade policy and border security are separate issues," Grassley said. "This is a misuse of presidential tariff authority and counter to congressional intent."

He said he has supported the president's immigration policies, "but this is not one of them."