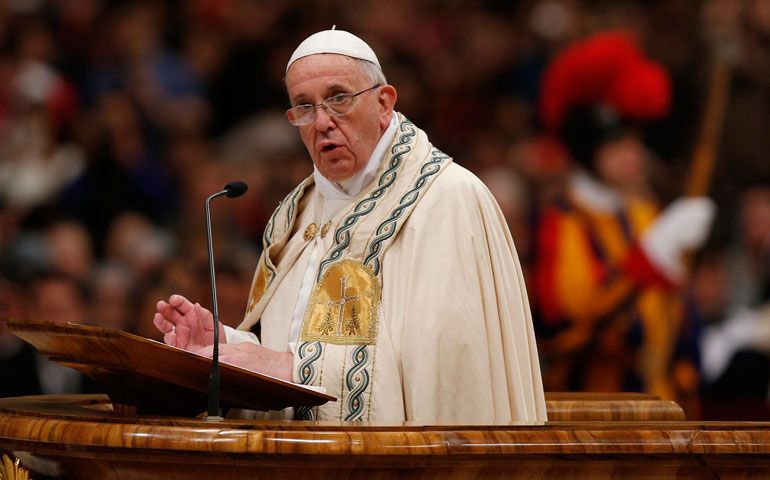 The most interesting criticisms of Pope Francis's apostolic exhortation, Evangelii Gaudium, have come from libertarians who are closest to the economic views the pope denounced.

In this document, Francis did not mince words. He condemned "trickle-down theories which assume that economic growth, encouraged by a free market, will inevitably succeed in bringing about greater justice and inclusiveness in the world. This opinion, which has never been confirmed by the facts, expresses a crude and naïve trust in the goodness of those wielding economic power and in the sacralized workings of the prevailing economic system." He warned against laissez-faire adherents who "reject the right of states, charged with vigilance for the common good, to exercise any form of control. A new tyranny is thus born, invisible and often virtual, which unilaterally and relentlessly imposes its own laws and rules." The pope chastised "the dictatorship of an impersonal economy lacking a truly human purpose."

"Speaking for libertarians, my objection to what the pope wrote derives from two things," the Cato Institute's Marian Tupy said in an interview with NCR. "First, there is the factual statement. The pope says the world is becoming worse, but that can be measured. In almost 200 pages, he never cites a single study, a single number, to support his claim." Tupy, who wrote an article encapsulating his objections in The Atlantic, cites a host of statistics to support his claim that "capitalism, compared to other systems, does very well at bringing people out of poverty."

Tupy's second objection has to do with the lens through which he and the pope view the prevailing economic situation. "The pope compares the world to a future utopia," Tupy said. "I look to the past and find data to support my views." Francis would, no doubt, plead guilty to the charge, but he would be unlikely to use the word "utopia." In the language of the Catholic church, that future to which Catholics are called is "the kingdom of God."

"My factual disagreement with the pope has no bearing on my respect for the man nor on my belief that everyone has a moral duty to help the poor," Tupy said. But, he sticks by his conclusion in his Atlantic article: "Pope Francis has a big heart, but his credibility as a voice of justice and morality would be immeasurably improved if he based his statements on facts."

A similar critique of Evangelii Gaudium came from the pro-market Acton Institute, which is run by a Catholic priest, Fr. Robert Sirico. In a video discussing Evangelii Gaudium, Sirico posed a series of questions: "Where are these unhampered markets?" he asked. "Where is the market absolutely autonomous?" Sirico seems to be suggesting that the pope was creating straw men and attacking them, and expresses the hope that future exhortations will confront the economic questions Sirico poses.

Francis has not been lacking in defenders. "The Catholic apologists for libertarianism -- and, sadly, there are a few who try to do this -- always begin with condescension," said Stephen Schneck, director of The Catholic University of America's Institute for Policy Research & Catholic Studies. "The pope's pity for the poor is understandable, they say, but he's naive about the miracle of the market. Baloney. Not only are such remarks patronizing, they're proof that the apologists don't understand the papal teachings. Pope Francis is not telling Christians to stoop to pity the poor. He's saying private charity, however wonderful and holy it is, can never be enough. He's saying that the poor also need justice. They need social justice, distributive justice, redistributive justice. He's saying that private charity by itself can never provide that justice given the moral deficiency of economic and social systems governed only by heartless invisible hands."

Lew Daly, a fellow at the secular think tank Demos in New York, thinks Francis hit the nail on the head in Evangelii Gaudium. "Pope Francis is not an innovator of church teaching in any way," Daly told NCR. "The innovation, compared to other voices in the Catholic church, is in his correct and properly urgent analysis of what is wrong in the church's eyes. Capitalism is not just 'broken'; it is inherently out of control, in a late phase of development, because a libertarian creed with mistaken precepts about human nature has infected political institutions, economic elites and even the church."

It is true that while Francis' speaking and writing style is more accessible than that of his predecessors, the content of what he says exhibits deep continuity with previous doctrinal statements. In 1891, Pope Leo XIII issued the first major papal statement on socioeconomic issues and he warned against the excesses of both capitalism and socialism. In 1931, Pope Pius XI wrote, "Just as the unity of human society cannot be founded on an opposition of classes, so also the right ordering of economic life cannot be left to a free competition of forces. For from this source, as from a poisoned spring, have originated and spread all the errors of individualist economic teaching." And, just one year ago, in his World Day of Peace message, Pope Benedict XVI stated, "It is alarming to see hotbeds of tension and conflict caused by growing instances of inequality between rich and poor, by the prevalence of a selfish and individualistic mindset which also finds expression in an unregulated financial capitalism."

Catholic social teaching did not invent itself in the late 19th century. Leo and his successors were responding to the social ills they perceived, but the lens they used was a theological lens. "All social crises are ultimately theological crises in the eyes of the church -- symptoms of profound disorder between humans and God," Daly said. "From the ancient Hebraic law to the modern social teachings of the church, social order stems from one basic precept: We owe everything to God and, yes, 'you didn't build that,' God did. While today's libertarian policy platforms, like the Ryan budget, seem shockingly new, in fact they are manifestations of the ancient catastrophic error that began with the fall of Adam -- the error of putting self above God and letting self-interest subvert God's commands for common flourishing."

Of course, Democrats are not immune to certain libertarian ideas. They are as allergic to government or society exercising control in areas of traditional morality as Republicans are to government economic intervention on behalf of the common good. John Carr, who now heads the Initiative on Catholic Social Thought and Public Life at Georgetown University, thinks both parties are now essentially defined by their commitment to economic or lifestyle libertarianism. "These libertarian tendencies are reinforced by large campaign contributors and powerful interest groups on the left and right (e.g., Emily's List and the Koch Brothers, Planned Parenthood and the Club for Growth). Who died and left Arianna Huffington and Grover Norquist in charge? Is there any room left for compassionate conservatives and pro-life Democrats?" The ideological incoherence of both parties, adopting libertarian ideas on some issues and communitarian ideas on other issues, is unstable.

The pope has a large microphone. The question is the degree to which Catholic politicians of both left and right have the ears to hear what he is truly trying to say.

Kasper: Francis' map for reform will outlive his pontificate