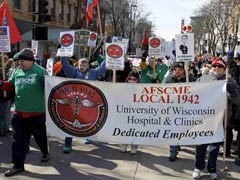 MADISON, WIS. -- For the better part of two weeks, Candice Owley slept beneath the soaring rotunda of Wisconsin’s historic capitol building. President of the Wisconsin Federation of Nurses and Health Professionals, Owley, 62, joined the tens of thousands of protesters fighting the law that stripped most public employees of their right to negotiate collectively.

“We’ve picketed over the years over narrow contract issues,” Owley said. “I have never seen anything like this. It’s about the fundamental right of workers to collective bargaining.”

Owley was part of weeks-long protests that drew thousands to the Wisconsin capital in February and March to oppose Gov. Scott Walker’s proposal to curb public employees’ collective bargaining power for benefits. He had presented it as a budget-cutting measure.

Writing on behalf of the Wisconsin bishops, Milwaukee Archbishop Jerome E. Listecki issued a statement reminding the governor of the long-standing church tradition of workers’ rights. “Hard times do not nullify the moral obligation each of us has to respect the legitimate rights of workers,” Listecki wrote.

Democratic senators brought legislative action to a halt by fleeing the state and denying the senate quorum. Republican senators finally bypassed the Democrats and approved Walker’s plan March 9. The country was watching Wisconsin as a possible indicator of a larger trend, since legislatures in Ohio, Indiana, Iowa, Idaho, Tennessee, Kansas and Michigan also are looking at ways to curb union rights.

Owley, who worked with the U.S. Conference of Catholic Bishops on developing labor guidelines for Catholic hospitals released two years ago, represents many of those involved in the protest that has been heard around the world: white, middle-class and well-educated.

She also represents much of what the Catholic church has become, thanks in part to success of the labor movement that church social teaching has endorsed for more than a century, said Fr. Sinclair Oubre, a Texas priest and a leader in the Catholic-Labor Network.

“We [Catholics] have been losing our connection to why we need unions,” said Oubre, a member of the Seafarers International Union who works as a laborer on ships during his vacations. “For most of us, the union was something our grandfather was in.”

Tom Shellabarger was a policy adviser to the bishops’ conference on labor and other social justice issues until he retired two years ago. Now he works with Interfaith Worker Justice in Washington, D.C. He sees the events in Madison as critical not only for the unions but also for the just economy and society ideals that are at the core of the church teaching.

“This will either be a wake-up call or labor’s last great stand,” Shellabarger said. “I hope it is a wake-up call because everything we hold dear as American Catholics is under assault.”

From Pope Leo XIII in 1891 to Pope Benedict XVI today, papal encyclicals have upheld the rights of workers to organize and bargain with management. Listecki’s letter to the Wisconsin Legislature continued that tradition, which heartened protesters at the Capitol, Owley said.

“He’s generally seen as a conservative,” she said. “The Catholics among us were surprised and very please that he would take a stand on this moral issue.”

While Benedict is also widely viewed as a conservative, he splits with the American political conservatives on this issue, Shellabarger said.

“Two of the three encyclicals he has written deal with labor and the dignity of the human person,” Shellabarger said.

The 1930s through the 1960s was the golden era for American labor. The fight for the right to bargain collectively with employers was intense. The Catholic church -- with leaders like Msgr. George Higgins and Dorothy Day -- was on the forefront of the battle.

“We fought wars over the right to organize,” Shellabarger said. “People died in the streets. Armies were brought up against workers trying to organize.”

But the success of the movement was also its demise: The increased wages and better working conditions created the American middle class.

“A lot of union workers were asking why they needed to pay their union dues,” Shellabarger said. “Teachers and other college-educated workers in particular were asking those questions and the government was saying, ‘You don’t need a union.’ ”

Between 1945 and 1975, the economy grew, Shellabarger noted. Everyone from the poorest to the richest prospered, he said, adding that the poor benefited the most. But by the 1970s, there was a shift -- women had entered the work force and it was taking two incomes to support a family. There was also a shift in who was prospering the most. The poorest, he said, saw the slowest growth and the richest the fastest.

“The thrust of Catholic social justice efforts has always been to work with the poor, so it makes sense that efforts would be directed at things like developing food programs for the poor -- they are on the margins,” Shellabarger said.

William Bole, an author who has written extensively on the Catholic role in the labor movement, said there was also a shift in where the Catholic left applied its efforts to attain social justice.

“In the 1960s and 1970s, the religious left went off to fight other causes,” Bole said. “They were fighting for civil rights and they were opposed to the Vietnam War. Labor favored the war for a long time.”

Labor’s pro-war stance was understandable, Bole said. Its members were building the ships and tanks that the war needed.

“Labor really didn’t need much defending for a long time,” Bole said. “It also took a long time to come out against the war. The bishops came out against before George Meany [AFL-CIO president, 1955-79] did.”

Clayton Sinyai, treasurer of the Catholic-Labor Network, said that in the 1940s and ’50s unions represented a third of the American workforce. Those workers were overwhelmingly Catholic and blue-collar.

The erosion of the power of the unions has created conditions not often discussed publicly: Workers are often not paid overtime, nor are they always paid the wages promised. Many employers have gotten around paying benefits by requiring workers to be contract employees without health insurance or other basic benefits, Sinyai said.

But the Madison protests have had a profound impact across the country, he said.

“We had seen a lot of similar initiatives discussed in other states but a lot of people pushing them are backpedaling now,” Sinyai said. “The fact that it turned out as it did in Wisconsin made people in New Jersey, Indiana and Florida ask, ‘Come on, do we have to do this now?’ That’s especially true in states where the governor’s races were tight.”

Public opinion about unions has changed because of the Madison protests, Sinyai said.

“It’s easy to dislike public employees in the abstract, but when you drill down and see the people who are affected, you see it differently,” Sinyai said. “These are the teachers and the nurses. They are the people everyone has a connection to.”

That’s had an impact on politicians across the country.