Munitions Russia is using, justifications for war come under scrutiny 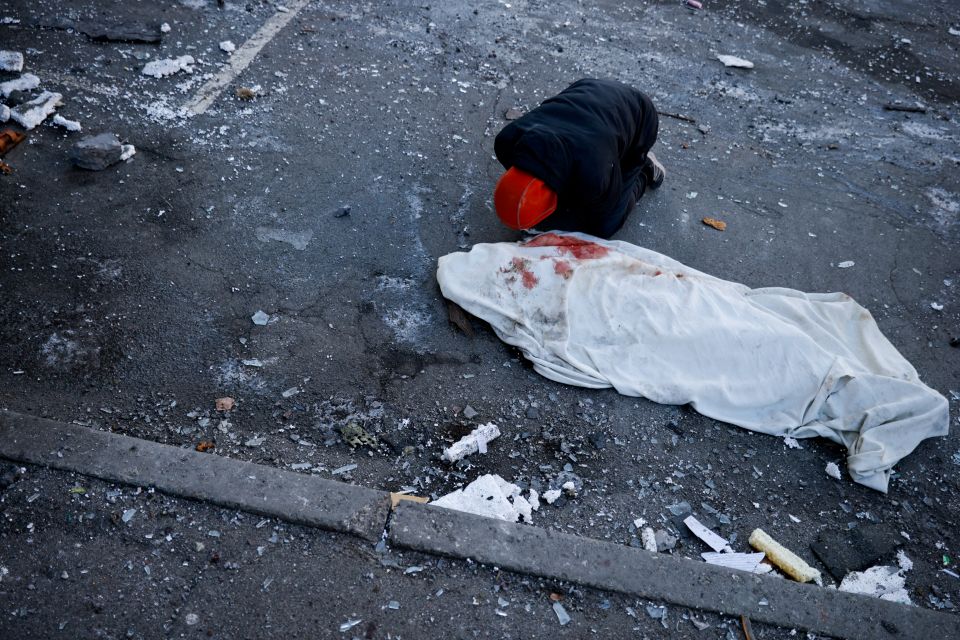 A man in Kyiv, Ukraine, mourns his mother, who was killed when an intercepted missile hit a residential building March 17, 2022. (CNS photo/Thomas Peter, Reuters)

WASHINGTON — "Knowing what we know about civilian casualties, a just war cannot be fought today," said Jeffery Nicholas, an associate professor of philosophy at Providence College in Rhode Island.

He made the comments in an interview with Catholic News Service on the continuing Russian invasion of Ukraine in light of just-war principles.

"What kind of munitions Russia is using — which are not 'smart' munitions," Nicholas said. "just obviates any application of just-war theory, especially on the part of the aggressor."

CNN, as well as other news outlets, are reporting that Russia is relying more heavily on "so-called 'dumb' bombs than on its arsenal of precision-guided munitions" in its war on Ukraine, adding, "These indiscriminate weapons kill scores of civilians."

"On the part of the defendant," Ukraine, Nicholas added, "the resistance is targeting specifically the combatants coming into Ukraine so they're generally adhering to just-war" principles.

One argument Russia is using to justify the invasion is to protect the Russian population in the southeastern Ukrainian regions of Donetsk and Luhansk, known collectively as Donbas and controlled by Moscow-backed separatists.

"Justification for secession is a difficult topic," said Gerard F. Powers, director of Catholic peacebuilding studies for the Kroc Institute for International Peace Studies in the Keough School of Global Affairs at the University of Notre Dame. He also is coordinator of the Catholic Peacebuilding Network.

"The general norm is against secession, but that's evolved over time," Powers said, pointing to the breakup of Yugoslavia in the early 1990s.

"From a moral point of view, secession is a remedy, not a right. Although I don't think there's a right to secede so that you can become a part of Greater Russia, if the goal is to bring all those people into one country," Powers said.

"If you want to claim a remedy of secession, it's akin to humanitarian intervention (another Russia claim), you have to show systematic repression," he added. "I don't see any credible evidence of this ... to justify seceding from Ukraine. You also have to establish your capacity to meet the obligations of sovereignty and meet your obligations to the world."

Mark Scibilia-Carver, an activist with the Catholic Worker and Pax Christi in the Finger Lakes region of New York, whose current project is making a case for sainthood for Benjamin Salmon — the first U.S. Catholic to write a complete refutation of just-war theory — said the media is ignoring nonviolent action in both Russia and Ukraine. "There have been in fact, many nonviolent actions," he added.

According to polls he has seen, Scibilia-Carver said 22% to 26% of Ukrainians polled before the war said that "in the case of Russian invasion or occupation they would prefer nonviolent civil resistance rather than pick up weapons."

"Probability of success is an important (just-war) criterion but it's really just based on the aggravation to avoid futile uses of force, even in self-defense," Powers told CNS. "That's a prudential judgment. It's very difficult to tell anyone, including the people of Ukraine, they can't defend themselves and they should simply allow the Russians to take over."

He added, "You can't say they have a moral duty to do that and not use limited force in self-defense to protect the existence of their country. I am concerned. You have to be concerned: Is this going to lead to a stereotype situation where whole parts of Ukraine are basically rendered uninhabitable and lots of people are killed?"

The main moral obligation, Powers said, is for Russia, "and for Russian forces not to indiscriminately attack cities and the civilian population and cause disproportionate harm. You've got to recognize where the moral responsibility lies, and that's with the Russian invaders. You have to be careful not to blame the victim. But it's important that Ukraine not reciprocate with explicit use of force."

The Catholic Church has for centuries said "just wars" are allowed as long as certain conditions are met, including ensuring that all other peaceful means have been exhausted and that the force is appropriate and will not lead to worse violence.

"The problem is that the nations today have made it a situation where it cannot be fought justly. They put the armories and munitions in an area, knowingly putting their citizens in line for an attack, in a place that they know is going to be attacked," Nicholas said. "This an issue not only for the attacker but also the defender."

Catholic peace groups have long been calling for a new framework consistent with Gospel nonviolence, saying the traditional just-war theory has too often been used to "endorse rather than prevent or limit war."

In 2016, leaders of Catholic peace groups hosting a Vatican conference called on Pope Francis to renounce the Catholic Church's "just war" theory and develop a new doctrine of "just peace."

Pope Francis has moved closer to a broad embrace of nonviolence and a declaration that modern warfare is so deadly and sophisticated that the traditional "just war" theories cannot apply.

In his 2020 encyclical, "Fratelli Tutti, on Fraternity and Social Friendship," he questioned whether in modern warfare any conflict could be judged a "just war" because proportionality and the protection of civilians seem to be difficult if not impossible to guarantee.

Much more recently, in a video conference with Russian Orthodox Patriarch Kirill about the ongoing crisis in Ukraine, the pope said: "There was a time when we spoke, even in our churches, of a holy war or a just war. Today we cannot speak like that."

"The Christian conscience of the importance of peace has developed," the pope said, according to a March 16 statement issued by the Vatican.

But how to get the war to end and the fighting to stop may be the most confounding piece of the puzzle.

"There is probably a creative solution here," Scibilia-Carver said. "Let (Russian President Vladimir) Putin say, 'Hey, I've won,' and withdraw from this attack, which is doing much more harm to him and his soldiers than it is to Ukraine. ... They might try to escalate."

Escalation is precisely what worries Powers. "This is not like any other conflict," he said. "No other conflict has the potential of setting off a third world war and the use of nuclear weapons.

Scibilia-Carver suggested a precedent that appears in the Bible.

"Take a look at Jesus in Gethsemane, because he's our model. He's the one we have to imitate at all times. Jesus, who was never armed, rejected Peter's violent defense in the garden. He healed the wound of his enemy," he said. Peter had severed the ear of a guard to one of the high priests.

"He refused to fight and kill. He surrendered to his enemies and he prevented further bloodshed. The disciples didn't understand Jesus' command to love their enemies, but he followed his own command to love your enemies. The apostles didn't understand that command, but they understood after they had seen Jesus in Gethsemane," Scibilia-Carver said.

African tradition blends with religion to illuminate path to forgiveness