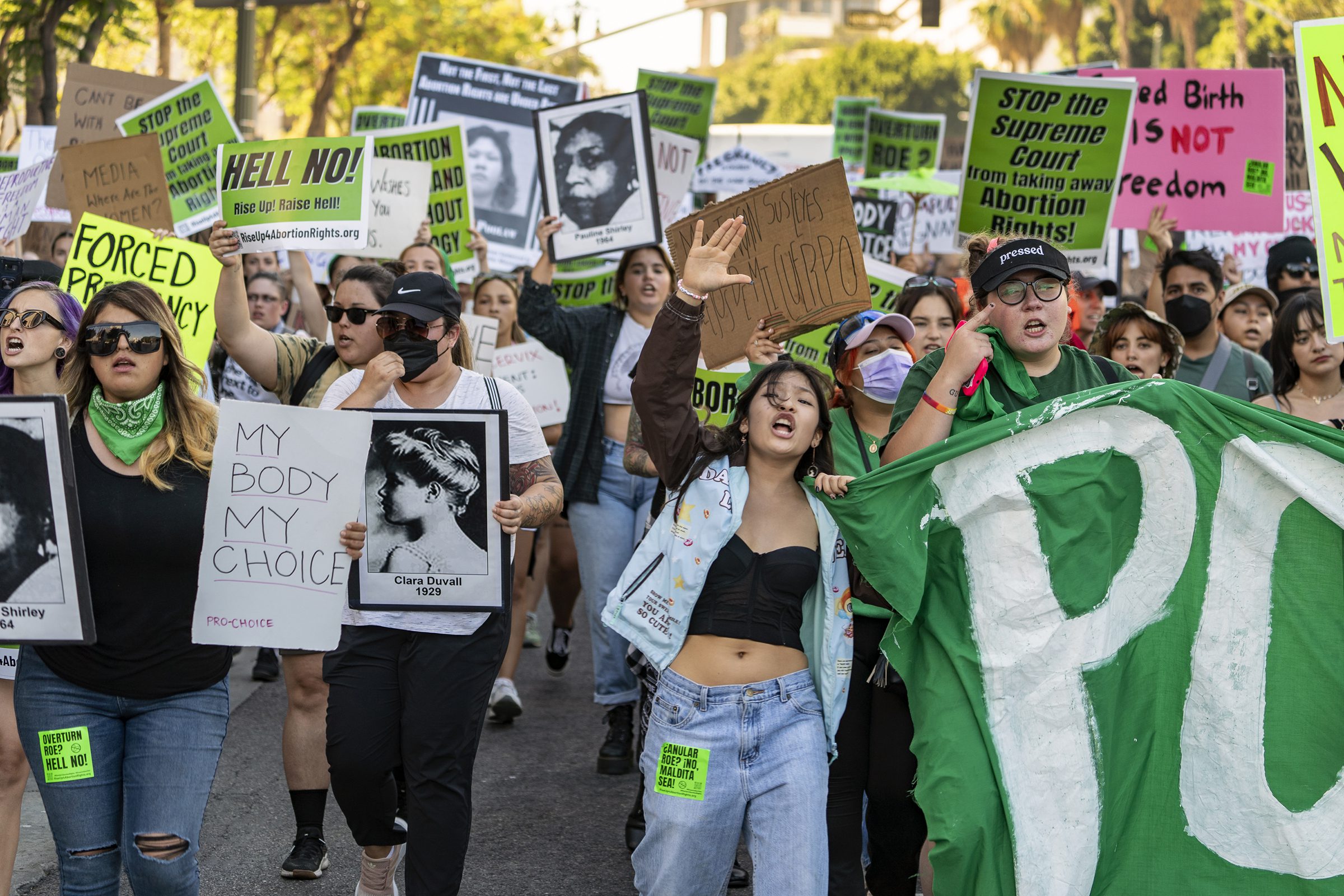 Catholicism will always be part of Leonor Villanueva's life, even though she stopped regularly attending Mass when her parish began hosting anti-abortion speakers toward the end of service.

Villanueva recites Catholic prayers and honors family celebrations like baptisms and quinceañeras. And she still sees herself as Catholic, even though she disagrees with Catholic teaching about abortion and homosexuality.

"I can still have my faith without listening to what the church says," Villanueva, 46, a Mexican American from California's Central Valley, said.

Villanueva is far from alone.

With Roe v. Wade overturned, new data from the Washington, D.C.-based Public Religion Research Institute found that among Latino Catholics, 75% say abortion should be legal in most or all cases. That's a big jump from the 51% who said so in 2010.

By contrast, a quarter of white evangelicals support legal abortion after the Roe reversal. Almost all white evangelical respondents said they'd like to see abortion banned after 15 weeks, and more than half said providing an abortion should be a felony.

The survey of 2,038 Americans, which used the Ipsos online panel, was conducted from June 24 to June 26 and was put in the field right after the announcement of the Dobbs decision, which overturned Roe. It included 241 Latinos, with 104 who identified as Catholic. The goal was to get an immediate response from the public.

PRRI's chief executive officer, Melissa Deckman, said Latino Catholics are very much aligned with other religious people of color in their support for abortion rights.

To Deckman, it's noteworthy that Latino Catholics have become even more supportive of abortion rights than Catholics who are white. Among the survey's white Catholic participants, 62% said they are opposed to the Supreme Court overturning Roe. That's compared to the 72% of Latino Catholics who said the same.

"We know that age is a big differentiator when it comes to attitudes on abortion for Americans overall, but clearly, I think it's helping drive more support for abortion among Latinos," Deckman said.

"We now have a situation where abortion is no longer a constitutional right, and access to abortion care is becoming more limited in a lot of areas," Deckman added. "I think that's led younger people to become more supportive of abortion rights in general."

In the state of Kansas, Alejandro Rangel-Lopez — a 21-year-old Catholic of Mexican descent—is helping lead the New Frontiers youth effort to encourage Latinos to vote against an amendment that would remove abortion rights from the state constitution. The group has organized Western-themed "Bans Off Our Boots" rallies in support of abortion rights and encouraged people to register to vote for the Aug. 2 primary. Rangel-Lopez said he also convinced his dad to vote against the amendment.

Rangel-Lopez, who identifies as queer and has the Virgin of Guadalupe tattooed on his thigh, was raised Catholic by his "very" religious and spiritual parents. They attended Mass often when he was younger, but also frequently practiced folk Catholicism, using a mix of charcoal and copal to cleanse their house of bad energy.

He has since embraced folk Catholic traditions over being an active member of a church, but said he still finds guidance from Roman Catholic doctrine.

"I learned of the importance of being a humble servant to those around you and to use whatever tools God gave you to uplift the voices of your neighbors in need," he said.

For Jennifer Hughes, a University of California Riverside professor who focuses on the history of Latin American and Latino religions, this new data helps highlight how Latino Catholics are an "increasingly important political demographic."

The survey's findings, Hughes said, "are challenging those stereotypes of who Latinos and Latino Catholics are."

Hughes notes that Catholics "grapple with this complicated, sometimes very contradictory tradition and figure out what makes sense to them."

Just because particular Catholics may have strong devotional practice to the rosary, altars, the Virgin of Guadalupe or other religious imagery, "that doesn't mean your politics are conservative."

Lucero, a Mexican American Catholic woman in her 20s from Minnesota, goes to Mass every week and also attends adoration on her own. She prays the rosary and listens to the "Bible in a Year" podcast with Fr. Mike Schmitz. She also supports access to abortion and birth control. Lucero didn't want her full name published for privacy reasons.

She finds it ironic that Catholic clergy — who can't marry or have sex — dictate church policy about sex, pregnancy and marriage. She wants to see abortion rates go down but says that policies that support families work better than bans.

"I want to see more of us live out caring for people who are born, not just the ones who are unborn," Lucero said.

Laura Fernandez, 27, thinks of her Colombian Catholic mother "who used to shudder at the thought of abortion" but has "eased up about it" over the years.

Fernandez, of Cleveland, Ohio, tells her mother anonymous stories of people she knows who have had abortions and whose "lives changed for the better." While her mother "doesn't love the thought of abortion," she feels fortunate having a "mom that listens to me and engages in critical thinking."

Fernandez said it was perplexing for her mother to see a friend from church support Donald Trump solely for his stance against abortion. "My mom did not understand that whatsoever because of everything else that Trump was, and I think that planted a seed in her," Fernandez said.

To Fernandez, Latinos "hated Trump so much" that it "somehow caused a shift."

"I feel like people were thinking that if the right was pushing this issue (of abortion) so hard, then they didn't want to be associated with it," she said.

Samuel Hernandez, 32, of Rockland County in New York, agrees. Hernandez, who is Mexican American and "socially justice-minded when it comes to my Catholic faith," supports access to abortion and is passionate about immigrant rights.

A former employee of Catholic Charities, Hernandez, a married father of two, said it was frustrating receiving emails from the United States Conference of Catholic Bishops and the Archdiocese of New York addressing the "evils of abortion" and highlighting "their own feelings about trying to overturn Roe."

"There's too much of an emphasis placed on abortion versus other social justice issues … such as poverty and food insecurity and things that could also help alleviate stress around pregnancy, unwanted pregnancy," said Hernandez, who is originally from the Rio Grande Valley in Texas.

Rosey Abuabara, 57, of San Antonio, Texas, grew up Catholic and said her mother attempted having an abortion when she was pregnant with her. Abuabara, the youngest of five siblings, said her mother feared the family could not support another child. She said her mother unsuccessfully tried to end her early pregnancy through plants and herbs to induce an abortion.

Abuabara, who is Mexican American, said she supports abortion because she "saw firsthand how poor we were."

"I would see my mother not eat dinner at night," Abuabara said. "The worst thing to do is see your children starving or your children sick and not being able to get health care."

Abuabara has identified as agnostic. Lately, she's found herself turning to Catholicism to cope with recent tragedies in her home state: the mass shooting in Uvalde that killed 19 students and two teachers and the deaths of 53 migrants who were found in a sweltering tractor-trailer in Southwest San Antonio.

She said she hasn't entirely left the church or belief.

"Sometimes, I just need to turn back to God to find some peace and some strength," she said.

A version of this story appeared in the Aug 5-18, 2022 print issue under the headline: Survey: Latino Catholics support abortion rights.