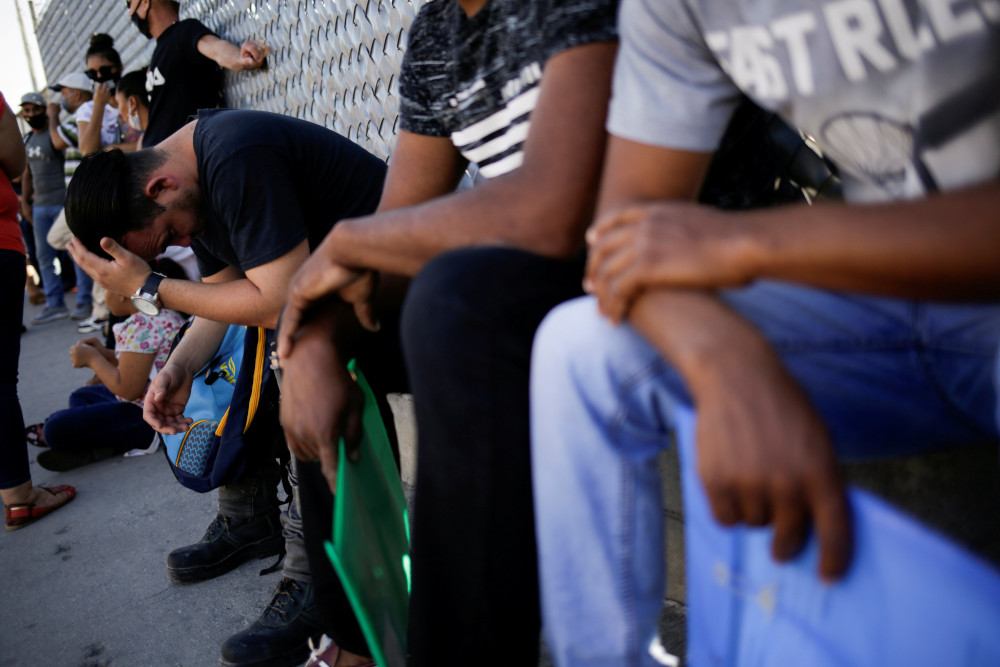 Migrants are seen outside the National Migration Institute in Ciudad Juarez, Mexico, July 8, 2020, where they had to renew their permission to stay in Mexico while awaiting an immigration hearing in the United States. (CNS/Reuters/Jose Luis Gonzalez)

Catholic leaders praised the Supreme Court's June 30 decision that gave the Biden administration the go-ahead to rescind a Trump-era "Remain in Mexico" immigration policy requiring asylum-seekers at the southwest U.S. border to wait in Mexico for their asylum hearings.

On his first day in office, President Joe Biden suspended the 2019 Migrant Protection Protocols, or MPP, put in place by former President Donald Trump in an effort to curb the influx of those arriving at the southern border seeking asylum in the U.S.

Biden formally sought to end the program months later, but lower courts ordered that the policy be reinstated in response to a lawsuit from Republican-led Texas and Missouri.

From January 2019, when the Trump administration started the program, to the end of 2020, nearly 70,000 migrants were sent back to Mexico to wait for their court hearings, according to the American Immigration Council.

Immigration supporters, including many Catholic organizations, have spoken out against this policy. And during oral arguments in late April, activists held a rally outside the Supreme Court holding signs with the message "safe not stranded."

The Supreme Court's ruling — the last opinion issued for the current term — said the lower court's decision about the immigration policy "imposed a significant burden upon the executive's ability to conduct diplomatic relations with Mexico," particularly since the United States cannot send migrants from Central America to Mexico without negotiating these actions with Mexican officials.

A dissent, written by Justice Samuel Alito and joined by Justices Clarence Thomas and Neil Gorsuch, said the Department of Homeland Security should not be free to "simply release into this country untold numbers of aliens who are very likely to be removed if they show up for their removal hearings. This practice violates the clear terms of the law, but the court looks the other way."

A joint statement issued by leaders of the U.S. Conference of Catholic Bishops, the Catholic Legal Immigration Network, or CLINIC, and Catholic Charities USA, said the Supreme Court's decision "recognizes and preserves the executive branch's ability to reverse untenable, illegal and immoral policies, regardless of who is in office."

They also said the asylum policy "obstructed due process and subjected people to the very dangers that forced them to seek refuge in the United States in the first place."

"With this ruling, we welcome the end of MPP," said Auxiliary Bishop Mario Dorsonville of Washington, who is chairman of the U.S. bishops' conference Committee on Migration, Dominican Sr. Donna Markham, president and CEO of Catholic Charities USA, and Anna Gallagher, CLINIC's executive director.

The leaders also noted the court's ruling does not "resolve the ongoing challenges at our country's southwest border," but they said it helps "pave the way forward."

The three groups had filed amicus briefs in the case.

"We will continue to work with these families to ensure that their needs are met."

In a series of tweets June 30, Dylan Corbett, executive director of the Hope Border Institute, said he welcomed the court's decision to allow the Biden administration to end the policy that "inhumanely returns vulnerable asylum-seekers and migrants to dangerous conditions in Mexico."

He called for an end to that policy and "every policy that denies the right to seek asylum at our border, including Title 42," a pandemic-era policy under which the Border Patrol to turn away hundreds of thousands of migrants at the U.S.-Mexico border over the past two years.

Corbett said his organization knows firsthand "the irreparable harm caused by these policies" and it also knows that the process of welcoming asylum-seekers can be "safe, humane and orderly."

Joan Rosenhauer, executive director of Jesuit Refugee Service/USA, expressed a similar view and also noted that asylum-seekers forced to wait in Mexico were often in dangerous and uncertain circumstances with limited access to housing, education, work opportunities and legal counsel.

"Our staff on the border hear stories every day of families with children who escaped horrific circumstances," she said, adding that she is pleased that those who have waited for so long will now be able to make their asylum claims and seek protection in the U.S.

"We will continue to work with these families to ensure that their needs are met," she said, urging the Biden administration "to take all necessary steps to quickly end MPP and establish an effective and efficient asylum process."