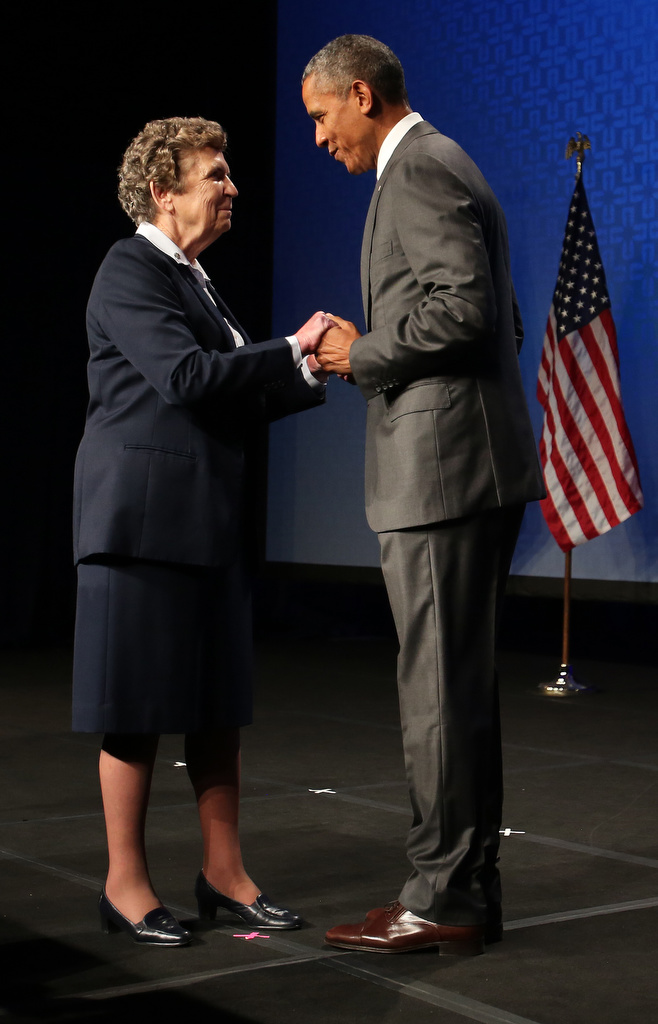 Sr. Carol Keehan, a Daughter of Charity who is president and CEO of the Catholic Health Association, greets President Barack Obama June 9 in Washington during CHA's annual assembly. (CNS/Bob Roller)

Telling the Catholic Health Association that he was there to say thank you, President Barack Obama June 9 recalled the struggles of passing the Affordable Care Act and ticked off the successes since it became law five years ago.

"Every one of these stories touched me," Obama said of those without affordable health care before the ACA took effect, referencing an emergency room visit when his daughter Sasha had meningitis. He said he had good insurance at the time but wondered about the families in the ER who did not.

"There is something deeply cynical" about attempts to roll back health care that works, Obama said of ongoing Republican-led efforts to kill the program.

Obama acknowledged that without the support of CHA president and CEO Sr. Carol Keehan and its members, the legislation would not have passed. He said he told Keehan, a Daughter of Charity, backstage, "I love you" and meant it.

"Her dedication to doing God's work here on earth, her commitment to serving 'the least of these,' her steadiness, her strength, her steadfast voice have been an inspiration to me," Obama said. "We would not have gotten the Affordable Care Act done had it not been for her. I want to thank the entire Catholic Health Association for the incredible work you do."

The speech at the Marriott Wardman Park Hotel in Washington was part of the 100th anniversary observances for the CHA, the leadership organization representing more than 600 Catholic hospitals and 1,400 long-term care and other health facilities in all 50 states.

Keehan told Catholic News Service after the event that getting the president to address the Catholic Health Assembly, as the CHA conference is known, was "the icing on the cake" of special events planned for the 100th anniversary year. The assembly attended by more than 1,000 people opened with a Mass at the Basilica of the Shrine of the Immaculate Conception across town, with Cardinal Donald Wuerl and Cardinal Theodore McCarrick, the current and retired archbishops of Washington, respectively, and other bishops. "The shrine was packed," she said. "It was as beautiful a Mass as I've seen."

She said she personally handed off the invitation to Obama during a meeting with White House Chief of Staff Denis McDonough several months ago. Keehan has worked closely with the White House staff over the years on a variety of issues.

In his remarks, Obama referenced his first job after college, working as a community organizer in a program funded by the Catholic Campaign for Human Development, operating out of Holy Rosary Church on Chicago's South Side.

"But despite these challenges, I saw how kindness and compassion and faith can change the arc of people's lives," he continued. "And I saw the power of faith -- a shared belief that every human being, made in the image of God, deserves to live in dignity; that all children, no matter who they are or where they come from or how much money they were born into, ought to have the opportunity to achieve their God-given potential; that we are all called, in the words of His Holiness Pope Francis, 'to satisfy the demands of justice, fairness and respect for every human being.'"

At the time, Cardinal Joseph Bernardin headed the Chicago archdiocese and Obama was struck by his example, he said. "He understood that part of that commitment, part of that commitment to the dignity of every human being also meant that we had to care about the health of every human being. And he articulated that, and the church articulated that, as we moved at the state level in the Illinois legislature, once I was elected there later on in life, to advance the proposition that health care is not a privilege, it is a right."

That is the core of the CHA mission, Obama said, going on to thank the members for their role in helping reform the nation's health care system.

"Without your commitment to compassionate care, without your moral force, we would not have succeeded," he said.

Obama cited individual stories of families affected by having access to affordable health care and the questions behind them: "What kind of country do we want to be? Are we a country that's defined by values that say access to health care is a commodity awarded to only the highest bidders, or by the values that say health care is a fundamental right? Do we believe that where you start should determine how far you go, or do we believe that in the greatest nation on earth, everybody deserves the opportunity to make it -- to make of their lives what they will?"

He and Keehan both acknowledged that the ACA is far from perfect.

"Like any serious attempt at change, there were disruptions in the rollout, there are policies we can put in place to make health care work even better," he said. He said the system needs reforms to how health care is delivered, it needs protection for the coverage of the 16 million people who signed up under the ACA; more states must expand Medicaid for the working poor and improvements are needed in quality of care while bringing down costs.

Keehan told CNS that the current system of health care "is not everything we need by a long shot, but it is an incredible step forward."

In addition to a majority of Republicans in Congress, some Catholic organizations also opposed key elements of the ACA. The U.S. Conference of Catholic Bishops has challenged in court the law's provisions for requiring that insurance plans include coverage for artificial birth control, sterilization and drugs that lead to abortions.