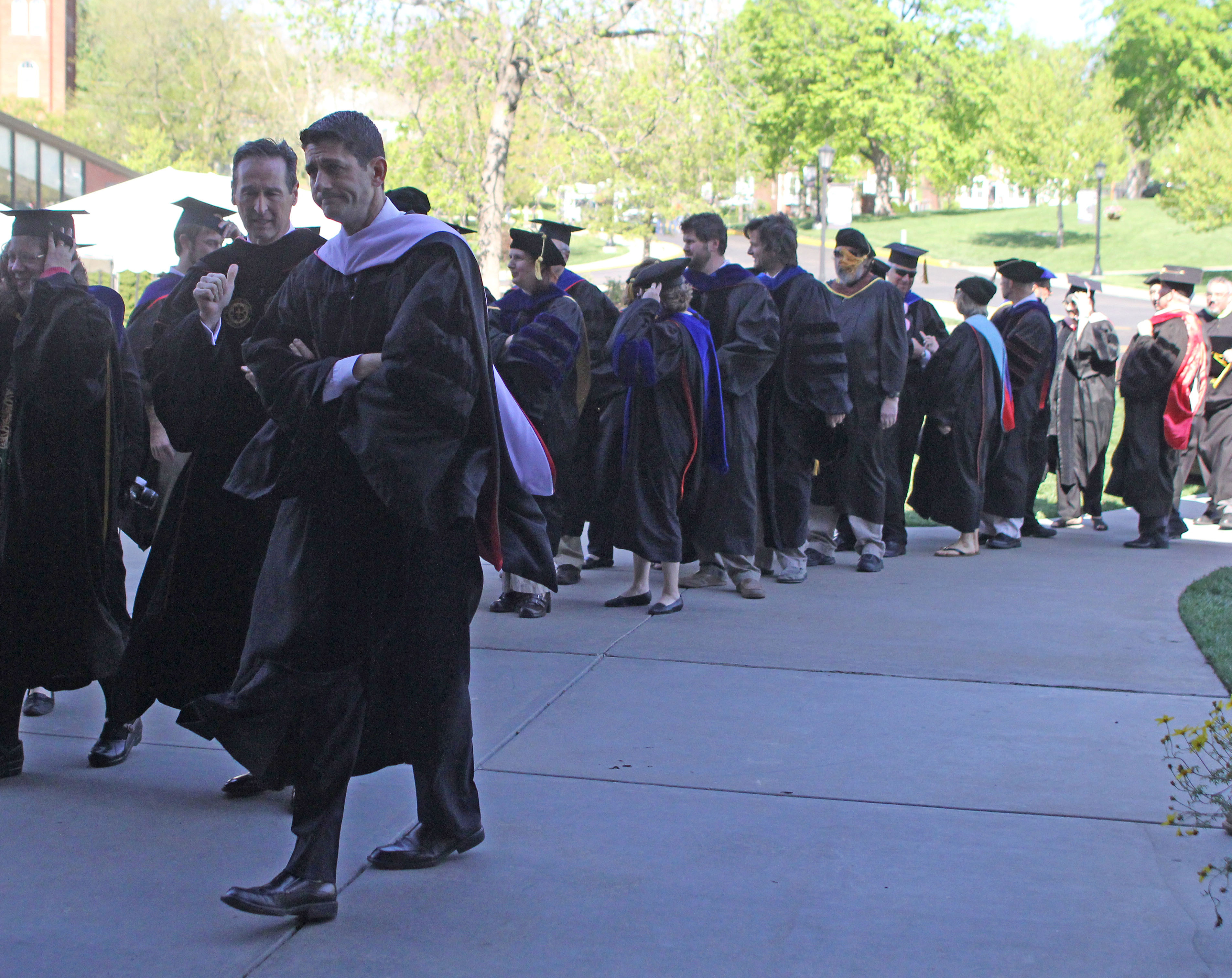 Processing behind a parade of graduates, Rep. Paul Ryan made his way Saturday toward O'Malley-McAllister Auditorium at Benedictine College to deliver the school's commencement address. While applause greeted Ryan inside the hall, protesters voiced their disapproval of his selection at the entrance of the small Catholic college in Atchison, Kan., primarily stemming from his federal budget proposals.

Choosing not to directly discuss his budget or the protests, Ryan instead spoke about the tenets of Catholic teaching he has used to defend it as well as how his faith has influenced his life as a Catholic public servant.

"Faith isn't a Christmas ornament; it's not something you save for a special occasion," Ryan said. "It's something you live with and struggle with every day. That's why it's so frustrating and so comforting."

He encouraged graduates to continue to search for their faith. If they did not have all the answers after four years at the college, he urged them to "discover for yourself what it is you really believe."

Barbara Luttrull of Watsonville, Calif., told NCR she enjoyed Ryan's speech and said it was geared toward the graduates and their futures.

"I think he wants [graduates] to put God above everything and walk in the right direction in their life," she said. Luttrull's grandson was among the graduating seniors.

Ryan posed the question: "How does a Catholic public servant apply Catholic social teaching?" He said on certain issues, such as preserving the sanctity of life, "the teaching is crystal clear," but when it comes to other issues, "there's a broad arc of prudential judgment, and there's room for everybody."

One of those issues involves solidarity and subsidiarity, two tenets of Catholic teaching that critics of Ryan's budget plan have taken to task, including some U.S. Catholic bishops.

In defining solidarity, Ryan said, "We are all in this together, so we must be good to one another ... and when we write laws of our nation, we must never lose sight of our primary purpose: the common good."

Ryan said the government should not act for others or tell them how to do their work. He said those most likely to solve problems are the people who are closest to them because of their familiarity with the community.

Ryan received substantial applause from the crowd when he voiced support for religious liberty related to Catholic hospitals, schools and other institutions, saying they should be allowed to do their work according to their moral standards.

Sesinyios Haileselassie, a graduating senior from Pittsburgh, said he appreciated Ryan talking about the Catholic identity and applying it in real-world situations.

However, "I thought Ryan was actually defending himself a lot more during his talk because he was criticized for his budget plan," he said.

Haileselassie said he understands the mixed reaction to Ryan's presence on campus.

"Being Catholic is not necessarily being conservative Republican, and I think that's what really troubled people," he said. "I think he's a great Catholic and we need more guys like him in Congress right now."

Not all approved of Ryan's presence on campus. About 30 people stood outside Benedictine's entrance with cardboard signs protesting Ryan's selection as commencement speaker primarily because of his federal budget policies as cars drove by and as graduates walked to the auditorium.

Benedictine president Stephen Minnis, who walked beside Ryan in the graduation procession, defended Ryan as the commencement speaker. He said while people could disagree with his budget proposals, the congressman embodied "key Benedictine principles."

Sarah Starnes from Kansas City, Mo., was among those standing outside in opposition. Although she considers herself Christian and not Catholic, Starnes said she believes when people ask what Jesus would do, "he would support policies that enhance the common good."

Referring to Ryan's budget, Starnes said she is not against people making a profit, "but it shouldn't be on the backs of the poor and the middle class."

"I just didn't understand what the Catholic value was that he was supposed to be representing," she said.

In his speech, Ryan said the last three popes were good examples of showing solidarity with the poor. Pope John Paul II said communism was wrong and freed the Polish people from fear, Ryan said, and Pope Benedict XVI spoke of the "dictatorship of relativism" and "taught us how to protect the world from falsehood." More recently, Ryan said Pope Francis is "breathing new life into the church" and shows "solidarity with the poor."

Alan Burns, a graduating senior from Overland Park, Kan., said while people are entitled to their opinions, he respected Ryan for being a Catholic who has gotten as far as he has.

"You can say what you want about politics, but ... I think Benedictine tries to get speakers that are successful Catholics in whatever they do, so I think Paul is a great example of that," Burns said after the ceremony.

[Eloísa Pérez-Lozano is an NCR Bertelsen intern. Her email address is eloisapl@ncronline.org.]