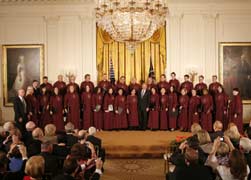 The choir from New York St. Patrick's Cathedral shared the stage with President George W. Bush during a celebration of the National Day of Prayer last year. (CNS)

WASHINGTON -- Every year between 2001 and 2008, former President Bush's calendar was cleared on the first Thursday in May to mark the National Day of Prayer in the White House East Room with prominent evangelicals.

Now the Obama White House is facing questions of inside-the-Beltway etiquette: Should Obama maintain the open door to conservative critics like James and Shirley Dobson, and if so, should they accept?

Or, will the White House have an official observance at all?

With those questions unanswered less than three weeks before the annual observance, the National Day of Prayer Task Force headed by Shirley Dobson is moving ahead with other plans.

"We're not the coordinators of that event," said Brian Toon, vice chairman of the task force. "That's controlled completely by the White House. We have been honored to be guests at the event in the past, but we have not heard a peep from them."

In years past, Toon said, a White House liaison has contacted the ministry at least a month in advance to ask about their participation in the White House events that featured music, Scripture readings and remarks by the president and Shirley Dobson.

She and her husband, Focus on the Family founder James Dobson, were seated prominently in the front row next to the president and first lady.

The White House, which usually does not officially announce events until shortly before they occur, declined to comment on whether it would even hold an event this year, much less who would be invited.

"Prayer is very important to the president's life," said Joshua DuBois, executive director of the White House Office of Faith-based and Neighborhood Partnerships, on Sunday (April 19). "It's too early to talk about the planning around that."

This year, Dobson's task force has opted to hold its annual event on Capitol Hill in the morning -- at the same time when its representatives are usually at the White House.

"We do pray for the president at our (Capitol Hill) observance and we have asked for a speaker from the Obama administration and we're waiting for them to get back to us," Toon said.

He said the group is "not politically inclined" towards Republicans or Democrats, even though early Obama policy changes -- opening federal funding for embryonic stem cell research and international family planning groups -- have riled Christian conservatives.

The National Day of Prayer was signed into law in 1952 by President Truman. President Reagan amended the law in 1988 to state that the observances would be held the first Thursday in May.

The task force's work has been criticized in recent years by critics who say the observances have been "hijacked" by evangelical Christians. Task force representatives counter that their events reflect a Christian perspective but all Americans are free to observe the day according to their religious viewpoints.

"Of course, we prefer that they cancel it altogether and not do anything," said Rob Boston, a spokesman for Americans United for Separation of Church and State, of any White House consideration of a National Day of Prayer observance.

But he speculated that if the White House does mark the day, it would likely include "lots of different types of religious leaders," akin to the interfaith feel of last year's Democratic National Convention.

Prior to the Bush years, task force leaders held more low-key events, including at Lafayette Park across the street during the Clinton administration.

"There was no East Room event until George W.," Toon said.

While he recalled being at White House receptions with rabbis and imams, Toon said the Capitol Hill event has tended to be "very Christian."

Other task force-related events will include private pilots who fly and pray over the nation's capitals and observances at national monuments, Indian reservations and town halls.

If there is no White House event this year, it would be a disappointment, Toon said.

"We're not politically inclined either direction," he said. "Our passion is to pray for all of our nation's leaders and their families."

But wherever they are in Washington, the president will still be in their prayers, he said.

"We can still do that from across the Mall," he said.

Fighting poverty or fighting the poor