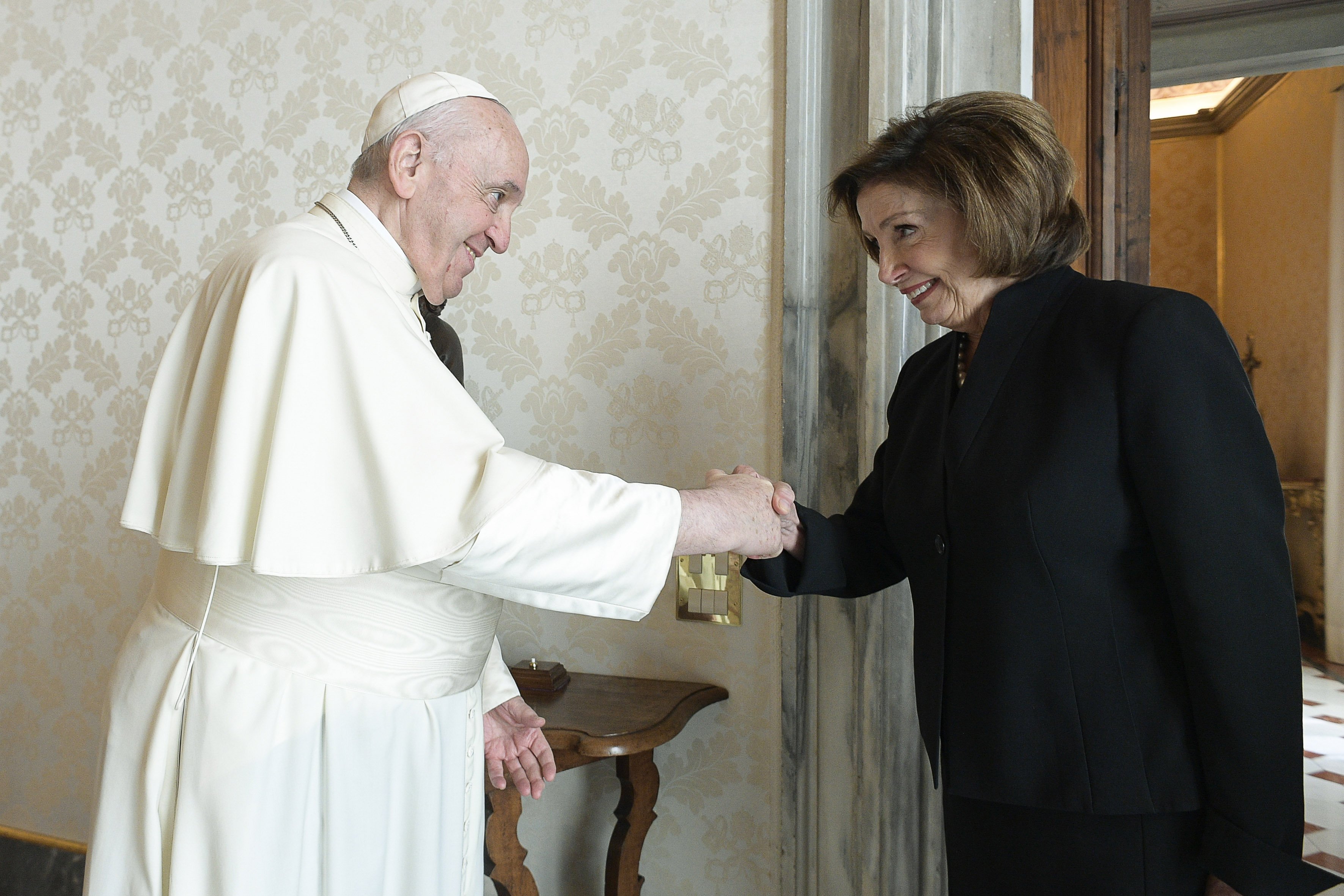 The Vatican announced the meeting in its daily bulletin.

Following their meeting, Pelosi released a statement saying it was an honor meet with Francis.

His leadership, she said, "is a source of joy and hope for Catholics and for all people, challenging each of us to be good stewards of God’s creation, to act on climate, to embrace the refugee, the immigrant and the poor, and to recognize the dignity and divinity in everyone."
The meeting between the two leaders comes just months after Pelosi's hometown Archbishop Salvatore Cordileone of San Francisco issued a pastoral letter saying pro-choice Catholic politicians like Pelosi will be barred from Communion in his archdiocese.
In recent weeks, Cordileone has specifically targeted Pelosi with a "Rose and Rosary" campaign, encouraging Catholics to commit to pray a rosary for her once a week and fast on Fridays for "conversion of her heart." The archdiocese has said it will send a rose to the California politician as a gesture on the part of those agreeing to participate in the campaign.

Pelosi's visit to the Vatican takes place just weeks before President Joe Biden, only the second Catholic president in U.S. history, is expected to meet with Francis, which will mark their first in-person encounter since Biden assumed the presidency in January.

The speaker's visit in Rome began on Oct. 7, where she addressed the G-20 Parliamentary Speakers’ Summit, ahead of the much anticipated G-20 summit of world leaders in Rome later this month.

Earlier this week she also met with representatives from the U.S. Embassy to the Holy See in Rome. On Oct. 8, the White House announced that former Indiana Sen. Joe Donnelly, a pro-life Democrat, would be nominated as its new U.S. Ambassador to the Holy See.

On Oct. 8, Pelosi also met with the Vatican's Dicastery for Promoting Integral Human Development. A statement on social media said the conversation included topics related to the environment, migration and the COVID-19 pandemic.

In an interview earlier this week, Cardinal Peter Turkson, who heads the dicastery and was present for the meeting with Pelosi, said in an interview that he disagreed with the approach of some U.S. bishops seeking to deny pro-choice Catholic politicians Communion. He went on to add that such a measure should be reserved for "extreme cases."

Pelosi has previously met Francis several times, both in Rome and in the United States.

In 2013, she attended Francis' installation Mass at the Vatican, along with then vice president Biden, and she was present when Francis became the first pope in history to address a joint session of the U.S. Congress in 2015. More recently, she met with the pope at the Vatican in 2017, where she was accompanied by her grandchildren.

This story was updated on Oct. 10 to include a statement from Speaker Pelosi.

This story appears in the Bishops, Biden and Communion feature series. View the full series.
A version of this story appeared in the Oct 29-Nov 11, 2021 print issue under the headline: Pope Francis meets with US Speaker of the House Pelosi.