Skip to main content
News
This story appears in the Immigration and the Church feature series. View the full series. 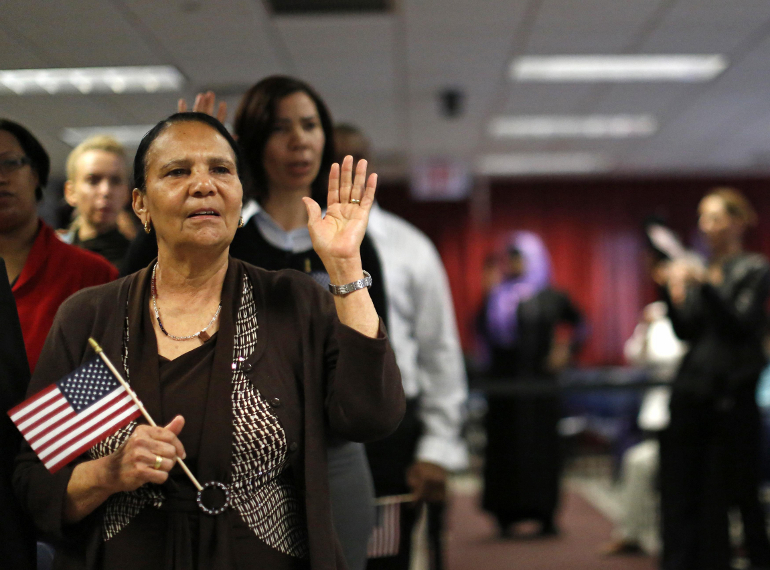 The U.S. Senate’s “Gang of Eight” released April 17 its anticipated proposal for sweeping immigration reform, with measures billed by one senator as the “toughest border immigration enforcement measures in U.S. history.”

The plan offers a 13-year path to full citizenship for the 11 million people living illegally in the country. But that doorway would not open until the U.S.-Mexico border was first declared secure.

“Our immigration system is broken and it is time for a national conversation about how to fix it. We believe common-sense immigration reform is vital in order to secure America's borders, advance our economic growth, and provide fuller access to the American dream,” read a joint statement from the eight senators.

After a briefing April 16 with senators, President Barack Obama lauded the bill for its “commonsense steps that the majority of Americans support.”

“This bill is clearly a compromise, and no one will get everything they wanted, including me. But it is largely consistent with the principles that I have repeatedly laid out for comprehensive reform,” he said in a statement.

The 844-page bill is titled the Border Security, Economic Opportunity and Immigration Modernization Act of 2013. It lays out six “security triggers” that the Department of Homeland Security must meet:

A summary of the bill appropriates $4.5 billion toward security costs, including fence construction, additional Border Patrol officers and customs agents, and technological upgrades, such as additional surveillance systems and drones.

Applications for provisional immigrant status could begin as soon as six months after the bill’s passage, as long as both the border security and fencing plans are in place. The window would remain open for a year, with the possibility of extending an additional 18 months.

To receive provisional status, a person must have resided in the U.S. since Dec. 31, 2011, and pay a $500 fee, assessed taxes and application costs. Ineligible are those convicted of felonies, multiple misdemeanors, who have illegally voted, committed a crime in another country, or entered the country after the cut-off date.

Provisional status allows one to work for any employer and travel outside the U.S. It expires in six years but is renewable. Families can apply under a single application, and applications could be waived for those who left the U.S. before Dec. 31, 2011 but are parents, spouses or children of U.S. citizens or permanent residents.

After 10 years, provisional immigrants can apply for green cards if the border security and fencing strategies are operational, and employment verification and visa exit systems are in place.

The bill will also overhaul the legal immigration system. An unlimited number of visas would be granted to foreign parents, spouses, children and parents of U.S citizens. After 18 months, visas for siblings and adult married children of citizens or permanent residents would be eliminated. The bill does not include same-sex couples.

Foreign students will receive a green card upon earning a diploma. H1-B visas for temporary, high-skilled workers would increase from 65,000 to 110,000, with a future cap as high as 180,000. A guest worker program would issue W-visas to low-skilled laborers living outside the U.S. for temporary work with registered employers, with an initial cap of 20,000, but leeway to rise to 75,000.

Initial reaction among faith groups toward the bill has been positive.

“Passing comprehensive immigration reform and creating a path to citizenship is clearly the way to ‘welcome the immigrant’ and ‘love our neighbor,’” said Kim Bobo, executive director of Interfaith Worker Justice.

The U.S. bishops’ conference released a statement saying they “looked forward to carefully examining the legislation” but would refrain from further comment until an April 22 news conference.

“The U.S. bishops look forward to carefully examining the legislation and working with Congress to fashion a final bill that respects the basic human rights and dignity of newcomers to our land -- migrants, refugees, and other vulnerable populations,” said Los Angeles Archbishop José Gomez, chairman of the bishops’ committee on migration, in the statement.

Catholic Relief Services called on the Senate to “address critical economic and social factors” as it moved the bill forward.

“In 2009 alone, more than 18,000 would-be migrants were kidnapped on their journey north,” CRS said in a statement. “Addressing future flows so that migrants have avenues to come legally to the US is critical to addressing this humanitarian disaster.”

Criticism of the bill was directed toward the limited window of eligibility for citizenship, and the requirement that the U.S.-Mexican border be declared secure before that window opens.

"The cutoff date for eligibility and other unfair and unwise restrictions will leave hundreds of thousands families out of the process and create all the same moral and practical problems with which we began," said Kica Matos, spokesperson of Fair Immigration Reform Movement.

"The 13-year length of the citizenship path is unjust as well as unwarranted and should be substantially shortened. All immigrant families deserve a chance to become a full part of the American dream in a reasonable period time."

She also criticized the requirement of a secure border before opening the pathway.

"Our families' well-being should not be conditioned on arbitrary border measures or any political or bureaucratic process which holds their loved ones hostage to regulations over which they have no control," Matos said.

The Institute of the Sisters of Mercy, which represents approximately 4,000 sisters serving in the United States and 11 other countries, issued a similar criticism.

“Though supportive of many aspects of the bill, the Sisters of Mercy urge elected officials to recognize and affirm that the U.S. border is more secure than ever,” the institute said in a statement.

“We will continue to support positive aspects of the bipartisan immigration bill, while encouraging a more expedited welcome of our immigrant sisters and brothers and sustaining advocacy against further militarization of the border,” said Mercy Sr. Anne Curtis, a member of the group’s leadership team, in a statement.