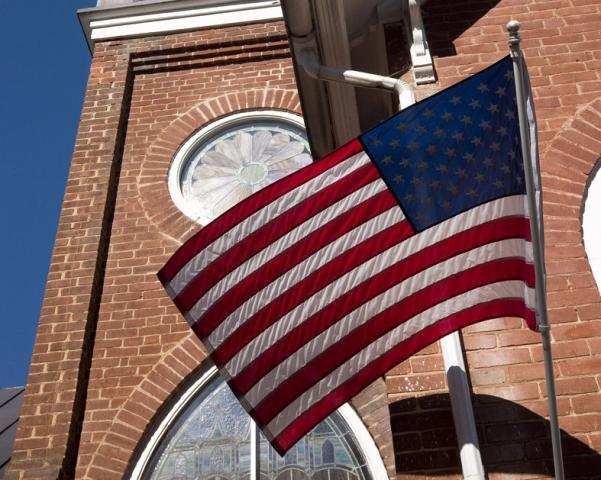 Tampa, Fla., is the GOP's choice for its four-day national convention, which begins Monday. But despite the Republicans' warm relations with so-called "values voters," the city on the bay does not enjoy a reputation as a particularly prayerful town.

A 2006 study showed Tampa to have the third most strip clubs per capita in the U.S. And a 2010 ranking of more than 50 metropolitan areas placed Tampa-St. Petersburg next to last in the percentage of people who identify themselves as religious adherents -- just ahead of Portland, Ore.

But just because Tampa may lack a great religious reputation doesn't mean it lacks a meaningful religious life. For those who need a break from the nominating and speechifying during convention week, there are some ways to find spiritual sustenance, even if you're just watching the proceedings from afar.

For example, a Conventions Prayer Coverage team, a nondenominational, nonpartisan group that will be asking God to guide the nation's political leaders, has set up a website that allots 15-minute prayer slots to anyone who wants to sign up. You can pray from Tampa during the convention -- or wherever you happen to be.

That same group has helped set up a prayer room within the Tampa Bay Times Forum, where the convention takes place, and is also sponsoring an all-day prayer rally on opening day of the convention, downtown at Herman Massey Park.

"We really believe that our nation is in trouble and at the edge of a dangerous precipice," said Carolyn Strahl of Lutz, Fla., the group's outreach chair. "Our hope is not in any one political party or any one man or woman. It is in prayer."

After Mitt Romney accepts the GOP presidential nomination in Tampa, the prayer team will move operations to the Democratic convention, which runs Sept. 4-6.

For those attending the convention, Tampa Tribune religion writer Michelle Bearden recommends a short walk to the University of Tampa, a private liberal arts school where you can visit the new $20 million Sykes Chapel and Center for Faith and Values.

"Visit the contemplation rooms, take in the art glass and sculptures, and take a break in one of the two meditation gardens," Bearden said.

"Its brick-and-granite exterior and zinc roof complement other nearby structures, and its interior is warm and inviting, with cherry wood, granite and extensive use of natural light. If you're lucky, an organist will be playing the chapel's centerpiece: a one-of-a-kind pipe organ, standing 55 feet tall with 3,184 pipes ... it took nearly two years to build and is considered one of the premier instruments in the country."

For those looking for a Catholic liturgy, or simply to appreciate a landmark of ecclesiastical architecture, the 117-year-old Sacred Heart Catholic Church sits just blocks from the Forum. Its Romanesque-revival style is embellished by 17 grand stained-glass windows made by a German company designated by the Vatican as a "pontifical institute" of Christian art.

A 25-minute drive from downtown Tampa, the abbey overlooks a lake. "And there are hills, which most people don't think Florida has," Plazewski said. "It's a nice place to get away and recollect yourself."

According to Sperling's Best Places, which publishes religion data for U.S. cities, Catholics make up the largest group of believers in Tampa, followed by Baptists and Methodists.

The city is also home to a smattering of Jews, Muslims, and Hindus. Although the Mormon population of Tampa is also tiny, presumptive GOP presidential nominee Mitt Romney, a Mormon, could choose from a number of area houses of worship built by the Church of Jesus Christ of Latter-day Saints.

"Coming from the west, I was surprised by the diversity of Tampa," said Rabbi Robert Judd of Tampa's Temple Kol Ami, who used to live in Tulsa, Okla. "We have multiple faith communities who work together in times of crisis."

Judd points visitors to Tampa to the Florida Holocaust Museum in nearby St. Petersburg, about a 30-minute drive. "It's a beautiful building and you can't help being moved if you go there," he said.

For those who want a spiritual experience in Tampa without trying, there's a good chance of bumping into a member of the gospel outreach team organized by three local pastors from the Lutheran Church-Missouri Synod.

The Lutheran evangelists will wear T-shirts emblazoned with "Who Will Save Us?" and walk the streets of Tampa sharing their faith. They hope to connect with some of the thousands of protesters and spectators expected to people the streets around the convention.

"Given that most of these people are dissatisfied to one degree or another, God is bringing a mission field to us," their Facebook posting reads. "Let's respond faithfully!"

Is Augustine the patron saint of the 2016 election?