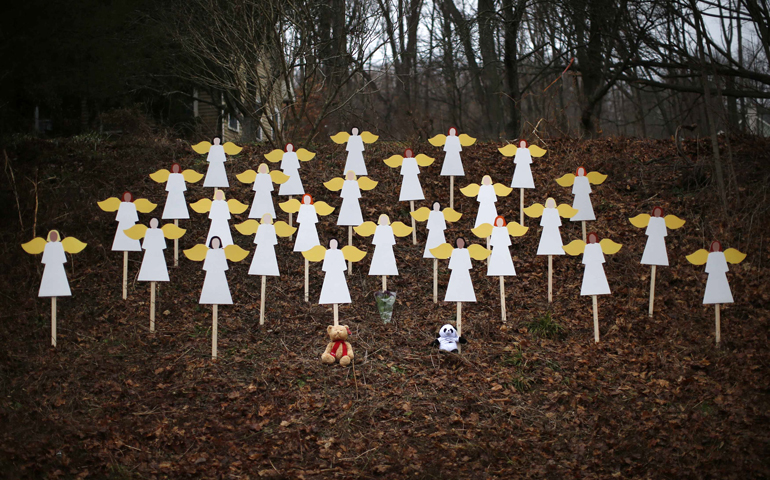 A compassionate and tearful President Barack Obama minced no words after the Newtown, Conn., school massacre and demanded action. Although Obama did not specify what action he had in mind, the action that has and will again spark colossal debate is how to crack down on the manic and senseless gun violence that has caused indescribable pain and suffering for so many victims. Now those victims are the innocent of innocents, elementary school children, their teachers and their grieving parents, relatives and friends.

The usual suspects were quick to pounce with their silly "guns don't kill, people kill" line. New York City Mayor Michael Bloomberg, who has loudly called for Obama and Congress to enact new and tougher gun control laws, quickly jumped back into the gun control fray and made the same call again. As the names and faces of the children and the others gunned down in the horrific school massacre become known, a legion of voices will also demand that gun control be shoved back on the White House and congressional table. This is where things again will get thorny.

The assumption is that the National Rifle Association and the gun lobby are so all-powerful and financially well-heeled that they can beat back any congressional move to impose tougher restrictions on gun access. It's certainly done a masterful job at that. The NRA did not issue an official statement on the massacre, other than a terse one-liner that it would wait until all the facts are in. But that didn't stop other gun control opponents who worked the blogs and websites, vociferously denouncing calls for tougher gun laws and geared up for a round of talk show appearances to tout their view.

But the NRA's money, political clout and the saber rattle of gun control opponents is only part of the reason tougher gun control laws face a hard uphill climb, no matter how many heartbreaking massacres occur. The tip-off on that came during the recent presidential election. Obama and Gov. Mitt Romney were briefly challenged by Bloomberg and gun control advocates to advocate and propose new gun curbs. This was prompted by the Aurora, Colo., theater shootings over the summer. The presidential candidates demurred. The issue quickly dropped off the political radar scope. The reason for the dodge had nothing to do with Romney's well-known NRA membership and opposition to tougher gun control laws. Nor did it have anything to do with Obama's seeing the issue as an unnecessary wave of the red flag in front of millions of gun owners in what was thought to be a potentially close presidential re-election battle.

Both simply recognized that gun ownership is a fact of American life and a rigidly protected constitutional right. During his stint in the Illinois legislature, Obama's major concern was cracking down on illegal gun sales and the spread of and access to semi-automatic weapons. This does little to keep guns out of the hands of loose screws such as James Holmes, accused in the Aurora shootings, and Adam Lanza, the alleged Sandy Hook school shooter. In the White House, Obama has simply followed the precedent of almost all presidents: leave tougher restrictions on gun sales and trafficking to the states. Some states have passed laws that ban assault guns and high-capacity ammunition magazines, limit the number of gun sales, require child safety locks on new guns, and outlaw the sale of cheap handguns.

The huge drawback to the state-by-state gun action is that it does not significantly limit the massive trafficking in guns across state lines. It also doesn't begin to address the question of how to identify and prevent the legions of ticking human time bombs that do not have a criminal record and for all intents and purposes appear to be normal, functioning individuals from legally purchasing and even stockpiling weapons, including weapons of mass destruction. Ultimately, only Congress can pass a uniform federal standard to restrict the manufacture, sale and transport of guns.

This is where the fight began, and, unfortunately, has quickly ended. The first ending was Congress's failure to reauthorize the 1994 federal assault weapons ban, which expired in 2004. Congress has been virtually mute on any gun curbs in the years since then. This did not mean gun control bills weren't written and introduced. They were in every Congress session. But not one piece of gun control legislation made it to the House floor. The 112th Congress was no different. None of the proposed gun control curbs even made it out of a house committee.

This in no way means gun control curbs are dead in the water in perpetuity in Congress. Obama has called tougher gun control laws "common sense." This signals that if there is enough public outcry and push, that one or more of the gun control measures could finally make it out of a House or Senate committee. Obama is not running for re-election and does not have to look nervously over his shoulder, worrying about enraged gun owners raking him over the coals for putting his White House muscle behind one of the bills.

That and the eventual passage of fresh gun restrictions would at least send the right signal that the gun lobby is not invincible and that millions of Americans want and demand anything that will at least potentially head off the next rampage.

[Earl Ofari Hutchinson is an author and political analyst. He is a frequent political commentator on MSNBC and a weekly co-host of the Al Sharpton Show on American Urban Radio Network. He is an associate editor of New America Media.]