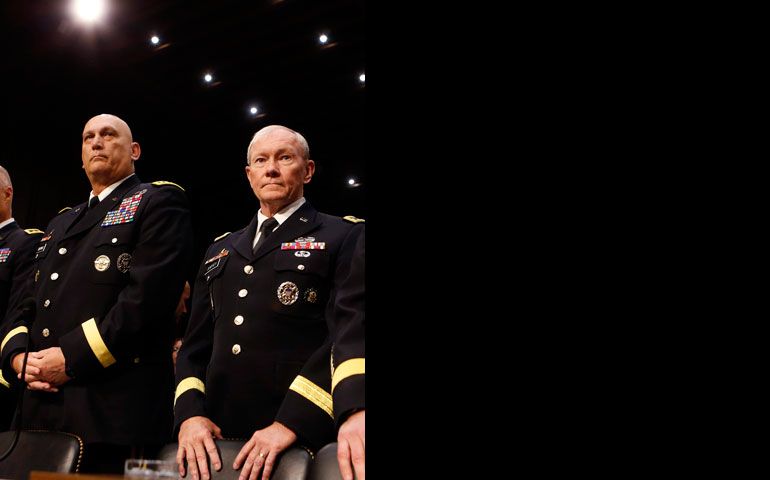 It was Groucho Marx, and it usually was, who had it right: "Military justice is to justice what military music is to music."

Bivouacking in a Senate hearing room in early June, a platoon of bemedaled and ribbon-adorned generals and admirals from the Army, Navy, Air Force, Marines and Coast Guard, plus aides-de-camp who had their backs, penitently confessed that rapes and sexual assaults in the military were rampant. The brass was under attack by friendly fire: The Department of Defense had released a report estimating that 26,000 service members, mostly women, were victimized in 2012, up from 19,000 in 2011.

Kirby Dick, the filmmaker who directed "The Invisible War," a documentary on sexual assaults in the military, estimated in The New York Times that "fewer than 15 percent of sexual assaults ... are ever reported" and "fewer than 1 percent resulted in a court-martial conviction." Such numbers prompted Sen. Barbara Boxer, D-Calif., to lob this grenade: "There are thousands of felons walking around -- free and dangerous -- in the military today."

The revelations are but one sign of a severely dysfunctional military. For three years running, more troops have committed suicide than died in combat. In 2010, the backlog of disability cases in the Department of Veteran Affairs reached more than 700,000. One in five veterans suffers from post-traumatic stress disorder. Rates of depression and unemployment are high among veterans. The grand Bush-Cheney hopes of militarily delivering democracy to Iraq and Afghanistan has crashed with the reality that both countries remain racked with violence and corruption. No apologies, much less meaningful reparations, have been offered to Iraqi and Afghan civilians killed by U.S. forces. Both wars were waged with borrowed money. (Think China.)

As mildly contrite as they were before the Senate Armed Services Committee -- "I took my eye off the ball a bit in the commands I had," sighed Army Gen. Martin Dempsey, chairman of the Joint Chiefs of Staff -- the top guns refused to admit that the military's judiciary was either unwilling or unable to go after rapists in the ranks. They declined to support proposed legislation that would reform military law by empowering prosecutors to oversee cases rather than military commanders. "Removing commanders, making commanders less responsible, less accountable, will not work," lectured Gen. Ray Odierno, Army chief of staff. "It will hamper the delivery of justice to the people we most want to help." The stonewalling means that the war in Iraq may be over and the war in Afghanistan may be ending, but the military's war on women goes on.

In the face of a reported 35 percent surge in sexual assault cases in the past two years, Odierno's self-importance and self-delusion is staggering.

While taking direct hits from the seven reform-minded women on the committee, the unhappy generals did receive ground support from one of the male senators. Sen. Saxby Chambliss (R-Ga.) had an explanation for the rapes and assaults. It's those enlistees between 17 and 23 years old: "Gee whiz, the hormone level created by nature sets in place the possibility for these types of things to occur."

That's it: Youthful horniness is the problem, not the violence of rape. Chambliss, the senatorial sexpert, offered still more enlightenment: "Several years ago, when we had the first females go out on an aircraft carrier, that when they returned to port a significant percentage of those females were pregnant." So, increase the role of women in uniform and look what happens.

Commander in Chief Barack Obama told the graduates of the Naval Academy that it is time to "stop these crimes." At West Point's commencement, Chuck Hagel called sexual assaults "a scourge." Neither his nor Obama's position on the reform legislation is known, nor whether they are up to firing or demoting the defiant and incompetent generals. It doesn't matter. As long as rape is a staple of war, as it has been historically, warriors will rape. As long as America's imperial interests fuel its foreign policy, military violence and sexual violence are in lockstep. To stop one is to end the other.

In humankind's larval state, prospects for that anytime soon aren't overly bright. Press on, though.

Editorial: In wake of NSA reveal, 'who will guard the guards?'