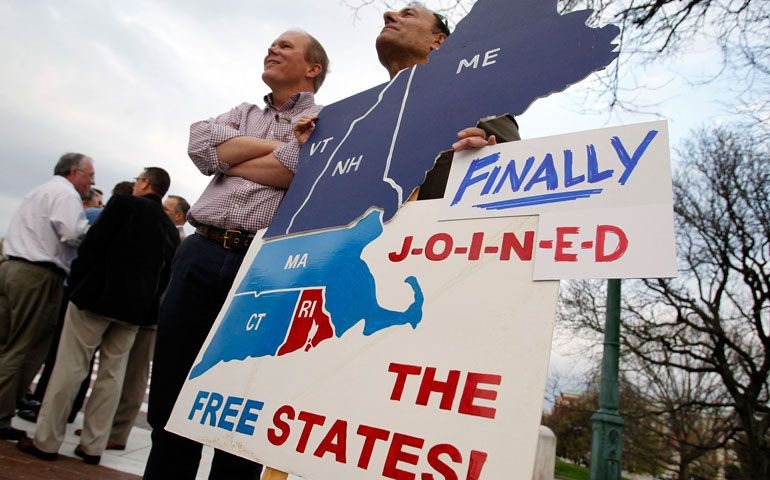 Tripp Evans and Ed Cabral stand with a sign that reads, “Rhode Island Finally Joined the Free States!” after a marriage equality bill was signed into law at the State House in Providence, R.I., May 2. ( CNS/Reuters/Jessica Rinaldi)

Ahead of two much-anticipated Supreme Court rulings on same-sex marriage, advocates for marriage equality saw momentum building in public opinion and recent policy changes, while the U.S. bishops have made defense of traditional marriage a major theme for their second Fortnight for Freedom.

Three states -- Rhode Island, Delaware and Minnesota -- each passed bills in May through their legislatures legalizing same-sex marriage, while a fourth -- Illinois -- failed in its attempt to bring a similar bill to a vote. The law in Minnesota, signed by Gov. Mark Dayton May 14, followed an Election Day block of a state constitutional amendment defining marriage as between a man and a woman.

Elsewhere at the Nov. 6 voting booths, voters in Maine, Maryland and Washington all passed ballot initiatives to legalize same-sex marriage, making it six states in the last eight months to do so.

The accelerated action in state legislatures follows the relatively fast-paced shift in the public's views nationwide, he said. As recently as 2009, national polls showed support for same-sex marriage sitting just above four in 10 Americans. Today, 52 percent of Americans support marriage for gay and lesbian couples, opposed to 43 percent against, according to Public Religion Research Institute's May tracking survey. Nate Silver, a political analyst and statistician, estimated the support's growth at 2 percentage points each year since 2004.

"It shows that public opinion has reached the tipping point, and that it's just a matter of time before more and more states adopt marriage equality," said Frank DeBernardo, director of New Ways Ministry, a Catholic gay rights group.

Marianne Duddy-Burke, executive director of DignityUSA, noted the high percentage of Catholics in Rhode Island and Minnesota, saying, "It shows that Catholics really do understand the basic dignity of human relationships, and that this is about love and commitment."

But marriage equality has yet to go national. While the recent May legislative action made it 12 states -- and Washington, D.C. -- permitting same-sex marriage, much of the support has been isolated to the Northeast. Of the 12, nine are on the East Coast.

One theory for the limited scope points to the religious makeup of the region. New England has a below-national-average population of white evangelical Protestants, a group viewed to be among the most opposed to same-sex marriage. On the flip side, the region has above-average populations of Catholics, Jews and mainline Protestants. More than half of the members of those groups support marriage equality. Public Religion Research Institute's latest polls show 57 percent of Catholics nationwide supporting same-sex marriage.

Jones referred to the Northeast bloc and several civil unions states (Illinois, New Jersey, Hawaii) as a "slight incline" in the climb toward marriage equality: "clear battles, but not overly strenuous." A second group of states more resemble foothills, he said, "where the challenges are a little steeper." Those include Michigan, Oregon, Colorado, Nevada and California -- states where support exists at the legislative level but constitutional bans are in place.

"It's not implausible to get to, say 20 states, or a little more than 20 states. But I think after that we're looking at scaling mountains," Jones told NCR, alluding to Midwestern and Southern states, primarily regions with large populations of white evangelical Protestants, and almost blanket constitutional bans.

However, gay rights advocates still see momentum for marriage equality, something many attribute to a greater presence of openly gay and lesbian people in the public sphere.

"People experience their cousin, their sister, their mother, their grandfather as a gay person and realize that the love that they share with their partners is just as deep, just as committed as anybody else's," Duddy-Burke said. "And why shouldn't they have the protections of civil marriage?"

A November 2011 institute poll illustrated that premise, finding a 30 percent gap among people with personal relationships with a person who is gay and those without -- 60 percent of Americans with a gay friend or family member (roughly 58 percent of the population) support same-sex marriage, compared to just 31 percent of those without a close connection.

"Stereotypes about gay people are really becoming eradicated. They're melting away," DeBernardo said, adding, "People are knowing that firsthand experience that gay and lesbian people are good citizens, are holy people and people who want to make a contribution to society."

Still, a nationwide sea change on marriage is far from guaranteed.

The National Organization for Marriage hailed the May 31 Illinois bill's impasse as a "major victory," as did the U.S. bishops' conference.

"This victory in the Land of Lincoln demonstrates that marriage redefinition -- even in the face of intense political pressure -- is not inevitable," San Francisco Archbishop Salvatore Cordileone, chairman of the U.S. bishops' Subcommittee for the Promotion and Defense of Marriage, said in a June 3 statement.

"We were heartened by the Illinois result," Kim Daniels, a spokeswoman for the U.S. Conference of Catholic Bishops, told NCR.

The push to retain marriage as between a man and a woman is expected to be a pivotal piece of the bishops' second Fortnight for Freedom, scheduled for June 21-July 4. Other parts of the campaign will look at religious liberty threats abroad, and the upcoming Aug. 1 deadline for compliance with the Department of Health and Human Services' contraception mandate.

Daniels said there is a sense of urgency on the marriage issue, with acute attention paid to "potential erosions to religious liberty." There is concern over penalties, such as lost tax exemptions, government licenses and contracts, for church ministries refusing to provide benefits for same-sex couples, as well as lawsuits against businesses -- church-affiliated or not -- that refuse to serve same-sex couples for religious reasons.

"This will be unpredictable and uneven across the country, but what we do know is that if marriage is redefined, the freedom of religious groups to witness to their faith will be restricted, and this would be a real blow to the common good of the country," Daniels said.

When asked about poll numbers showing nearly six in 10 Catholics supporting same-sex marriage, Daniels said this presented "a call to redouble our effort to proclaim the truth about marriage."

The fortnight and state actions come as separate Supreme Court rulings on two same-sex marriage cases were expected in mid- to late June. How the cases -- Hollingsworth v. Perry (California's Proposition 8, which bans same-sex marriage) and United States v. Windsor (the federal Defense of Marriage Act) -- are impacted by the recent state action remains up in the air.

Michael Bailey, a Supreme Court expert and professor at the Georgetown University Public Policy Institute, said the justices are likely listening to the public discussion, perhaps to gauge their own parameters.

That states are acting on their own could present the court with justification to "get out of the way and let things take their course a bit," Bailey told NCR.

The court has a range of options. In the Windsor case, it could deny the Defense of Marriage Act's constitutionality in restricting federal benefits for married same-sex couples, or it could dismiss the case. With Hollingsworth, it could nullify Proposition 8 in California only, or set a precedent for other states, or dismiss the case.