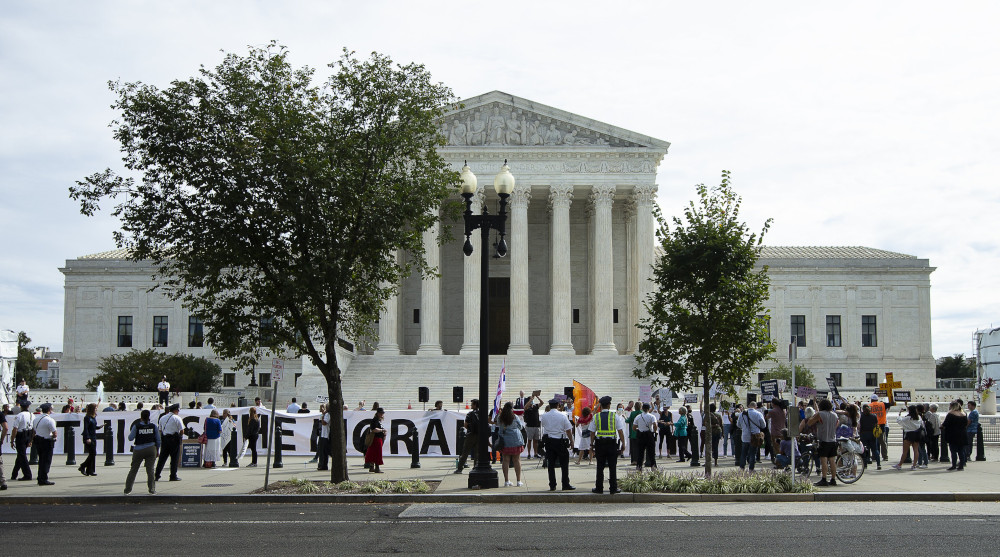 Pro-life advocates and supporters of legal abortion are seen near the U.S. Supreme Court building in Washington on Oct. 4. (CNS/Tyler Orsburn)

On Wednesday, Dec. 1, the U.S. Supreme Court will hear oral arguments in the case Dobbs v. Jackson Women's Health Organization. At issue is a Mississippi law that lowers the current point at which a state can ban abortions from 24 or 25 weeks, the viability standard set by the court in its 1992 decision in Planned Parenthood of Southeastern Pennsylvania v. Casey, to 15 weeks. It is possible the court will go further and strike down the baseline holding of its 1973 decision in Roe v. Wade, establishing a constitutional right to an abortion.

The hardest part about writing on the abortion issue is the knowledge that nothing you write is likely to change anyone's mind. The issue is profoundly emotional, and emotions tend to becloud, not facilitate, rational, moral analysis.

When the court decided last May to hear the Dobbs case, NARAL Pro-Choice America, one of the nation's leading abortion rights advocacy organizations said: "There is no path for the Supreme Court to uphold Mississippi's abortion ban without overturning Roe's core holding, illustrating the direct and acute threat to reproductive freedom across the country." That is hyperbole. A ban at 15 weeks is hardly the stuff of patriarchal tyranny.

By way of comparison, abortion laws in Europe vary. The Netherlands has one of the most liberal set of laws, permitting abortion up until week 24 and with a five-day "cooling off" period after consultation with a doctor. Most EU countries have earlier cut-offs, in the 10-14 week range, with exceptions for the life and health of the mother, as well as fetal abnormality. Ireland had very restrictive laws, even threatening women who procure an abortion with long prison terms, but in a 2016 referendum, the country's voters overwhelmingly decided to permit abortion up until the 12th week of pregnancy.

So when pro-choice activists complain that the Mississippi law threatens to push them back into some patriarchal dystopia, do they mean to suggest that the women of Europe are without rights? That they live in such a state of radical unfreedom?

On the other hand, if the abortion clinic in Mississippi already prohibits abortions at 16 weeks, arguments about late-term abortions are not germane. Images of third trimester unborn children are deceptive in terms of the Mississippi law, but you can be sure those images will be displayed on placards outside the Supreme Court building on Dec. 1. Hyperbole can exist on all sides of this debate.

In an important essay in The New York Times, Claremont McKenna College's Jon Shields argued that the principal reason the abortion debate has remained central to the culture wars, while other social issues like sex education and gay rights are mostly no longer really contentious, is that both sides in the abortion fight appeal to the liberal tradition's emphasis on rights:

Thus, the pro-life movement endures precisely for the same reason that the pro-choice movement does — both are nurtured by our common rights-oriented culture. It is a rare fight in American history in which people on both sides think of themselves as human rights activists, called to expand the frontiers of freedom and equality.

I think there is more to it than that, but he has a point. And, in American consumer culture, when you get an issue framed in terms of individual choice, you tend to win.

The "more to it than that" is the totemic and deep-seated worldviews that are at stake. A pro-choice friend who is active in the labor movement told me that while he knows many union members disagree with the official position of the AFL-CIO on immigration, they also know the union leadership is appealing to the better angels of their nature. Abortion is different. People with whom we agree on most political issues can not only oppose us on this issue, they are flummoxed by the opposition. It is why the AFL-CIO has never taken a stance on the issue.

Shields also argued that compromise was possible, and that the Mississippi law might embody the kind of compromise we could all live with. Unfortunately, powerful interests and organizations require the perpetuation of this fight, not its resolution.

Still, pro-life leaders should be forewarned that if the court overturns Roe in its entirety, and allows states to entirely ban the procedure, the political backlash will be severe. And once the conservative majority goes down that road, where will it end? Will the 1964 Griswold case, which also rested on the right to privacy, unmentioned but implicit in the Constitution, be in danger too? That decision overturned Connecticut's ban on contraception!

As Catholics, we must always oppose the taking of human life. As Catholics, we must always defend the inherent dignity of women and affirm their rights. I have long believed that any effort to change the law before we in the pro-life movement had changed the culture would be doomed to fail. We must make abortion unthinkable and unnecessary before making it illegal. How to get there?

In the days and weeks ahead, perhaps we can all perform an examination of conscience and assume for a moment that those with whom we disagree were right about the central fact of abortion, that is, those who consider themselves pro-life should assume the unborn child does not yet have a soul, is not yet a human person, and those who consider themselves pro-choice should assume that the unborn fetus is a child, a human who is very small and vulnerable but a human being nonetheless.

If the church is wrong about the unborn child being a human being, all the things I think we need to do to combat abortion are still things we should be doing. Women should know that their careers are not going to be jeopardized or even side-lined because of a pregnancy. No woman should worry about being able to afford bringing a pregnancy to term. No woman should fear for her safety if the father of her unborn child becomes violent or threatens violence. The raising of children must become something that is as much the father's as the mother's responsibility. We should try and enact the legal and cultural changes to make these things happen no matter whether the unborn child is fully human or not.

But if the church is right, and the unborn child is a human being, what kind of moral reckoning will be demanded of our society?

In the days and weeks ahead, it is my fervent prayer that we can all try and be as sympathetic as possible with those who disagree with us about abortion, remember that they can be wonderful people and that there are plenty of jerks on our side of the divide. I fear that my prayer may be as vain as Shields' hope that our nation might find a workable compromise.