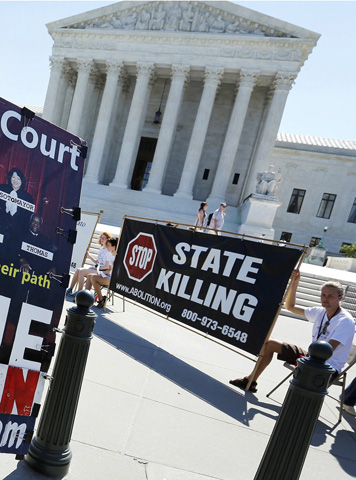 Protesters against the death penalty gather in front of the U.S. Supreme Court building Monday in Washington. (CNS/Reuters/Jonathan Ernst)

As the Supreme Court upheld that the current procedure for lethal injection is constitutional in a 5-4 decision, Catholics, attorneys, and both proponents and opponents of the death penalty weighed in on the outcome of Glossip v. Gross.

The case, which tackled an unusually technical discussion on pharmaceutical options, ruled that Oklahoma's use of midazolam was not a form of cruel and unusual punishment when administered as the first of three drugs in the lethal cocktail, despite being a sedative rather than anesthetic.

But those on both sides of the debate -- including the Supreme Court justices in both the majority opinion and dissent -- agreed that this case transcended that specific issue indirectly.

Capital punishment is constitutional; therefore, there must be a constitutional way of carrying it out, Justice Samuel Alito wrote. Alito and proponents of the death penalty said challenging the use of midazolam was a tactic in unraveling the legality of the death penalty. While Justice Stephen Breyer's dissent -- joined by Justice Ruth Bader Ginsburg -- leaned toward its abolition, the majority maintained its lawfulness.

The Catholic church denounces capital punishment when other methods that respect human dignity are available to protect society, with sec. 2267 of the Catechism of the Catholic Church adding that cases where death is the appropriate response "are very rare, if not practically nonexistent." And Pope Francis has gone so far as to call for an end to life sentences.

"It's hard to imagine what could be crueler than a prolonged, torturous death, or more unusual, given that 80% of the executions in the United States last year took place in just 3 states," the National Coalition to Abolish the Death Penalty wrote in a statement following the ruling.

Opponents of the death penalty told NCR that how cruel and unusual this form of punishment is highlights the moral question: Can we find valid, ethical comfort in administering painless executions?

"We need to be clear that there is no humane way to put a person to death," said Alex Mikulich, a Catholic theologian at the Jesuit Social Research Institute at Loyola University New Orleans. "[Lethal injection] violates basic human dignity, and by imposing that kind of torture, it diminishes all of us. It dehumanizes us."

"I think people of faith who are against the death penalty -- we're at a point where we need to redouble our efforts to end this practice in our country," he continued. "We clearly cannot rely on the courts to end it."

The Glossip v. Gross decision fell on the anniversary of Furman v. Georgia, the 1972 case that first ruled capital punishment as unconstitutional; however, the court then suggested legislation that would make death sentences constitutional again, such as standardized guidelines for juries. This makes the United States one of nine nations that Amnesty International lists as "persistent executioners," joined by China, Iraq, Iran, Saudi Arabia, Yemen, Sudan, Bangladesh and North Korea.

Under public pressure, European pharmaceutical companies that had provided states with the lethal drugs have stopped selling them for executions, forcing states to turn to alternates with unproven efficacy.

"The one thing that [this case] does show on the political side is that the campaign to make these drugs inaccessible has worked," said David Burge, an attorney and leading member of Georgia's Republican Party. "I'll be curious to see if these drugs will become harder to get."

Robert Blecker, a professor of criminal law, constitutional history, and the Eighth Amendment at New York Law School, told NCR that the question of midazolam was merely a make-way controversy that happens to be the "issue of the moment."

Despite being a public supporter of the death penalty, Blecker, who wrote The Death of Punishment: Searching for Justice among the Worst of the Worst, has long been against lethal injection, "not because it might cause pain, but because it certainly causes confusion; it conflates punishment with medicine. This is killing we're talking about. This is not medicine."

For that reason, he advocates for firing squads, saying they are "more overtly and honestly presenting what they really are, which is punishment. ... Let's acknowledge what we're doing, and if we can't stomach it, then abolish it."

Over the past 30 years, Blecker -- a self-described retributivist -- has visited more than two dozen prisons in 10 states and said the comfortable living arrangements for those sentenced to life without parole is largely why he supports the death penalty. For example, some prisons allow inmates to participate in softball leagues or have vacation days. "This is the living hell that awaits them if you abolish the death penalty."

"The problem is we declare 'let the punishment fit the crime,' then in the actual administration of criminal justice, we do everything we can to undermine it. The death penalty is the only self-avowed punishment we have left," he said, noting that not a single mission statement in any U.S. correctional facility includes the word "punishment."

Agreeing with Alito's opinion on Glossip v. Gross, Blecker added that the Constitution should not have to guarantee a painless death for the condemned, as nobody gets that assurance when experiencing natural death.

Recalling the lethal dosage his father-in-law received when dying of cancer, Blecker said the "exact same scene" was replicated when he witnessed the execution of Florida's Bennie Demps: strapped in a gurney, IV in his arm and surrounded by loved ones.

But Michael Sheedy, executive director of the Florida Conference of Catholic Bishops, told NCR how someone is executed is irrelevant to the moral question.

"If it were painless, we'd still oppose the use of it in the current context," Sheedy said. "It continues to advance the misguided notion that killing is wrong by killing."

"Even as we seek justice for these grave wrongs and render compassion for those who have endured great loss, our faith impels us to call for the building up of a culture of life where every human life is valued."

While the church maintains the immorality of executions, others oppose it for its impracticality. Burge, who recognizes that his party is known for being "tough on crime," said legislators in Georgia are taking a second look at capital punishment for its ineffectiveness. They've reduced sentences for nonviolent crimes and have made parole "more intelligent," and the state's conservatives are willing to apply the same scrutiny toward the death penalty

"It's not a clean, simple system that people imagine it to be," he said. "It doesn't protect society the way people think. It's expensive, messy, it takes forever to implement, and I don't think it helps the victims. We're executing people 20 or 30 years after their crime -- there's no deterrent in that. ... We're spending a whole lot of money on something that doesn't give us a very efficient value compared to the alternative: long-term imprisonment."

To which Blecker would answer, "Justice ain't cheap," emphasizing that if the "only proportional response to most cases is death as punishment, then even if it's very expensive, that's a price we should be willing to pay."

Kent Scheidegger, legal director of the Criminal Justice Legal Foundation, told NCR that the legal process in sentencing someone to death "does not have to be as long or as expensive as it is," as there is seldom any question as to the identity of the perpetrator in most capital cases. "There is no reason that sentences cannot be carried out within six years of sentence."

Mikulich, however, said about 4 percent of the people executed are innocent, also noting the 40 percent margin of error in federal cases. And about 10 percent of those sentenced to death since 1976 have been exonerated.

The same day the Supreme Court ruled on lethal injections, Glenn Ford -- who spent 30 years on Louisiana's death row until his exoneration for a crime he did not commit -- died after battling cancer for 15 months. Ford was released in March 2014 after a state district judge voided his conviction after evidence revealed that he did not commit a 1983 murder. The state compensated him for his years lost, but shortly after his release, Ford was diagnosed with cancer.

In a statement following Ford's death, the National Coalition to Abolish the Death Penalty wrote, "We pledge to continue the fight to abolish the death penalty in his honor."

"The death penalty is on the outs, with even conservative states like Nebraska outlawing the policy," the coalition wrote in a separate statement regarding Monday's ruling. "Yet that message clearly hasn't risen up to the highest court in the land. That means our work is far from done."

"Americans from all walks of life must recommit ourselves to ensuring that policymakers, attorneys, and yes, the Supreme Court understand America doesn't want or need the death penalty anymore."

NCR, which has advocated for abolishing the death penalty in editorials, filed a friend of the court brief in favor of the plaintiffs in the Glossip v. Gross case.