Supreme Court justices side with church in playground dispute 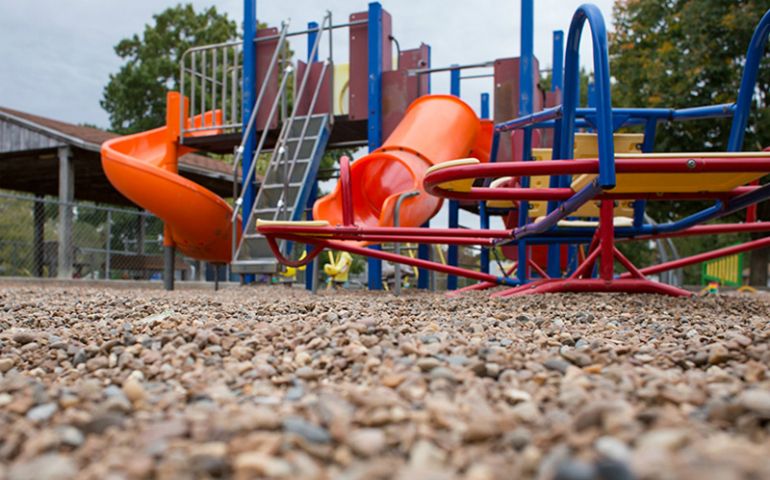 Washington — A clear majority of Supreme Court justices seemed ready April 19 to rule that the separation of church and state should not extend to swings and slides.

In a case with implications for more than 30 states that prohibit using public funds for religious purposes, the justices appeared aligned against Missouri’s refusal to include a Lutheran church in a grant program that provides funding to resurface playgrounds and make them safer.

The high court had delayed hearing the case for nearly a year after the death of Justice Antonin Scalia, perhaps because of fears the eight remaining justices would split along ideological lines, as they have in some cases involving religious liberties. But the addition of conservative Justice Neil Gorsuch this month may not have been necessary.

“It does seem as though … this is a clear burden on a constitutional right,” liberal Justice Elena Kagan said in reference to the state’s refusal to treat Trinity Lutheran Church as equal to other nonprofits seeking state grants, given that the church met all the neutral criteria for the program.

If the high court were to rule against the church on such a safety issue, said Justice Stephen Breyer, another liberal, “we proliferate litigation forever in areas that are critical, like police, fire, health” from aggrieved religious institutions seeking to participate in secular activities.

Their concerns raised the possibility that the court would rule 7-2 in favor of the church, though perhaps on narrow grounds, so as not to set a broad, nationwide precedent on public funding for religious institutions. Justices Ruth Bader Ginsburg and Sonia Sotomayor did not seem inclined to support any such funding.

The case dates back to 2012, when the Columbia, Missouri church applied for a state grant to replace the unforgiving, pea gravel surface of its child learning center’s playground with material made from recycled tires. It placed fifth among 44 applicants, 14 of which were awarded grants, but the church was passed over based on a provision of the state constitution.

The church’s lawsuit soon became a cause célèbre among supporters of religious freedom, led by the Alliance Defending Freedom, which took its case to court. It lost at the federal district and appellate court levels, but the Supreme Court’s decision in January 2016 to hear the case was seen as a positive sign. Then Scalia died the next month, prompting the court to delay hearing the case until now.

Gorsuch’s confirmation wasn’t the only late-breaking event, however. Missouri’s new Republican governor, Eric Greitens, last week reversed the state policy and said churches will be eligible for such grants in the future. That led some justices to wonder if Trinity’s challenge was unnecessary.

“If we have no adversity, hasn’t this case become mooted?” Sotomayor asked James Layton, the state’s former solicitor general who argued in favor of the religious exclusion.

The church raised two central claims in court papers. It said the exclusion violates the First Amendment’s protection against policies prohibiting the free exercise of religion, as well as the 14th Amendment’s promise of equal protection for all. “This is clearly singling out a religious organization with no justification to do so,” said David Cortman, the Alliance Defending Freedom senior counsel who argued the church’s case.

If the Supreme Court were to rule against the church, its supporters say, that could give states justification to deny funds for other services, ranging from police and fire protection to soup kitchens and battered women’s shelters. The conservative Institute for Justice says 1.3 million students in school-choice programs could be affected.

Justice Samuel Alito, one of the court’s staunchest defenders of religious freedom, cited a series of examples to illustrate that Missouri’s exclusion of religious groups could extend to funding that protects against school violence or acts of terrorism. He and others wondered how those programs could be denied but not police and fire protection, which are required under the Constitution’s equal protection clause.

If police and fire protection must be provided to the church, Breyer asked, how can the state “deny money to the same place for helping children not fall in the playground, cut their knees, get tetanus, break a leg, et cetera? What’s the difference?”

Layton, who worked for the state’s prior Democratic administration, defended the policy as treating all religions and religious groups the same. While the free exercise clause requires that the state not interfere with the church’s activities, it does not require state funding, he said.

“We don’t want to be in a position … where we are selecting among churches,” Layton said.

Politics | Supreme Court justices side with church in playground dispute

Courts give some last-minute relief from HHS contraceptive mandate