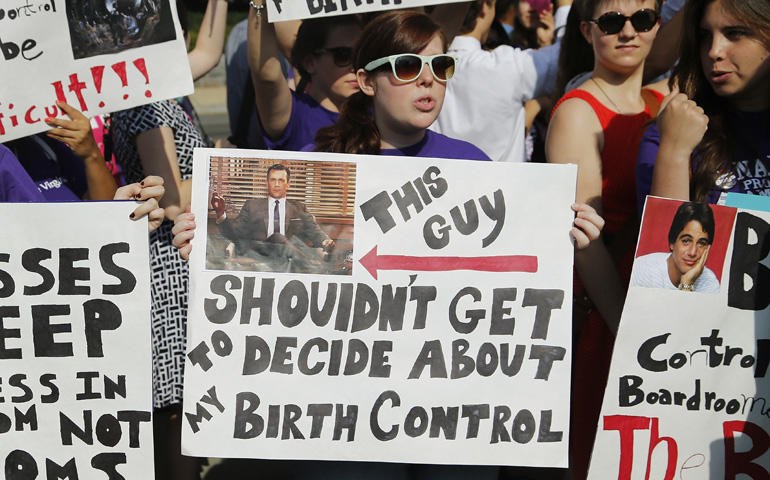 Supporters of legal abortion and the federal contraceptive mandate demonstrate Monday outside the U.S. Supreme Court in Washington. (CNS/Reuters/Jonathan Ernst)

The 5-4 ruling by the court was made regarding the private corporations Hobby Lobby and Conestoga Wood Specialties, which filed suit against a Department of Health and Human Services mandate requiring coverage of contraceptive services in health care plans, saying it conflicted with their religious views.

In a contentious decision, written by associate Justice Samuel Alito but opposed by all three women serving on the court, the justices ruled for the first time that certain businesses can hold religious views, effectively requiring the Obama administration to find another way to provide contraceptive services to women employed by those companies.

The businesses, the court said, are afforded such protection by the Religious Freedom Restoration Act (RFRA), a 1993 law aimed at preventing legislation that infringes on a person's free exercise of religion.

The court, however, limited the scope of its decision, granting such protections to "closely-held" corporations -- those defined by the Internal Revenue Service as having 50 percent of their stock owned by five or fewer individuals.

"We hold that a federal regulation's restriction on the activities of a for-profit closely held corporation must comply with RFRA," reads the decision from the court, written by Alito, who was joined in the majority by Chief Justice John Roberts and Justices Clarence Thomas, Antonin Scalia and Anthony Kennedy.

"Because RFRA applies in these cases, we must next ask whether the HHS contraceptive mandate "substantially burden[s]" the exercise of religion," the justices continue. "We have little trouble concluding that it does."

Calling Monday's ruling "a decision of startling breadth," Ginsburg wrote that Congress meant for its 1993 law to "serve a far less radical purpose."

"The exemption sought by Hobby Lobby and Conestoga would override significant interests of the corporations' employees and covered dependents," Ginsburg wrote. "It would deny legions of women who do not hold their employers' beliefs access to contraceptive coverage that the [health care law] would otherwise secure."

The decision, released Monday, was in regard to two cases, decided together: Burwell vs. Hobby Lobby Stores and Conestoga Wood Specialties Corp vs. Burwell.

Hobby Lobby, which operates more than 500 arts and crafts stores in the United States with more than 25,000 employees, is owned by a Christian family. Unlike the Catholic church, the company is generally not opposed to covering birth control in its employees' heath care plans but is opposed to covering certain contraceptives it considers abortifacients.

After a meeting with the pope at the Vatican in April, the president of the company said he wanted to be able to operate Hobby Lobby according to "biblical principles."

"We believe those principles help provide success for the business and when our government mandated that we provide life-terminating drugs, it's what we in the family agreed that we could not do," said Steve Green, who was visiting Rome for the opening of an exhibit at the Vatican museums that features biblical antiquities owned by his family.

Writing a four-page concurring opinion to Monday's decision, Kennedy said that it "does not have the breadth and sweep ascribed to it by the respectful and powerful dissent."

If the government wanted to ensure that employees of "closely-held" companies were provided with contraceptive coverage, Kennedy wrote, it could devise a funding scheme to provide that coverage.

"In these cases, it is the Court's understanding that an accommodation may be made to the employers without imposition of a whole new program or burden on the Government," Kennedy wrote.

In his opinion on behalf of the court, Alito addressed concerns that Monday's ruling could be used by companies to prevent them from providing other services like vaccinations.

"Our decision in these cases is concerned solely with the contraceptive mandate," Alito wrote. "Our decision should not be understood to hold that an insurance-coverage mandate must necessarily fall if it conflicts with an employer’s religious beliefs."

"Other coverage requirements, such as immunizations, may be supported by different interests (for example, the need to combat the spread of infectious diseases) and may involve different arguments about the least restrictive means of providing them," he continued.

In her dissent, Ginsburg also criticized the court's reliance on the definition of "closely-held" corporations, saying it is "bound to have untoward effects."

Citing a December 2013 Forbes magazine listing of the largest-held private companies in the U.S. -- which included corporations like Cargill, Koch Industries, and Dell -- Ginsburg wrote that while the court "attempts to cabin its language to closely held corporations, its logic extends to corporations of any size, public or private."

The Obama administration's final version of the health care mandate, announced in June 2013, provides exemptions from its impact for nonprofit groups. According to the mandate, any organization that self-certifies as a nonprofit religious group with religious objections to contraceptive coverage could defer coverage of contraceptives to a separate health insurance issuer.

At least three dozen other cases across the country are pending challenging those rules for religious employers -- including from many Catholic dioceses and groups -- claiming they do not do enough to take into consideration objections some religious groups have to contraceptive coverage.

Writing in his weekly archdiocesan column Sunday, Chicago Cardinal Francis George emphasized his criticism of the health care mandate, saying it "insists that any institution serving the public must treat women's fertility as an enemy to be suppressed for the sake of women's freedom."