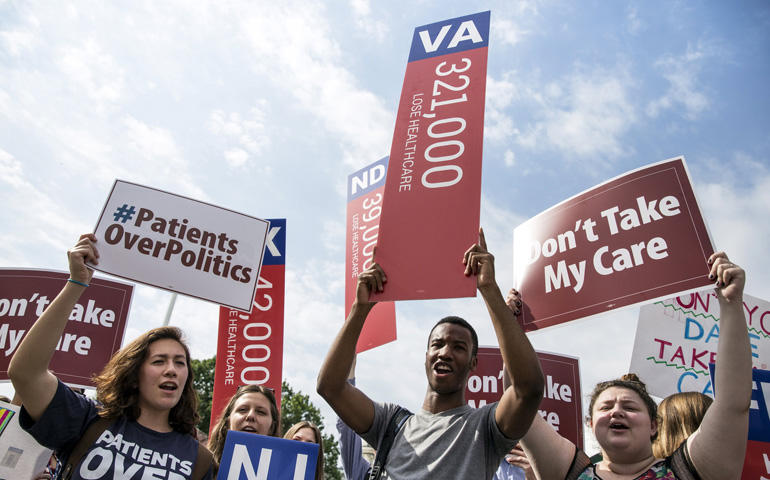 Supporters of the Affordable Care Act rally Thursday at the Supreme Court in Washington. (CNS/Reuters/Joshua Roberts)

Writing that "Congress passed the Affordable Care Act to improve health insurance markets, not to destroy them," a 6-3 majority of the Supreme Court on Thursday upheld tax subsidies for participants in health care exchanges run by the federal government in states that refused to create them.

In the majority opinion, Chief Justice John Roberts disentangled what he said was "more than a few examples of inartful drafting" in how the 2010 law was written that contributed to the interpretation that federal subsidies for people with lower income should only be available to residents of states that created their own health care exchanges.

The subsidies were challenged by four residents of Virginia -- which has a federal exchange -- who don't want to purchase health insurance and argued that the tax credits they would receive to do so are not what the law intended. Without the subsidies, their income level would allow them to be exempt from the requirement of the ACA to purchase insurance.

Lower courts disagreed and the Supreme Court upheld those decisions.

Thirty-four states use the federal insurance exchange because they did not set up their own. An estimated 6.4 million people who live in those states were at risk of losing subsidies that average $272 a month to help play insurance premiums.

The ruling said the interpretation of the plaintiffs in King v. Burwell would undermine two of the three principle objectives of the ACA -- tax credits for those who cannot afford to pay a full insurance premium and a requirement that nearly everyone have insurance coverage -- and would not apply in states where the federal government runs the exchange.

"The combination of no tax credits and an ineffective coverage requirement could well push a state's individual insurance market into a death spiral," Roberts wrote. "It is implausible that Congress meant the act to operate in this manner."

The case hinged largely on what Congress intended by phrasing in the ACA that referred to "exchange established by the state." The majority concluded that the language meant tax credits for insurance applied to purchase on "any exchange created under the act." Such credits are necessary, Roberts wrote, for the federal exchanges to function like the state exchanges "and to avoid the type of calamitous result that Congress plainly meant to avoid."

While Congress makes laws, the court's role is to "say what the law is," he said, citing Marbury v. Madison. "That is easier in some cases than in others. But in every case we must respect the role of the Legislature, and take care not to undo what it has done." It is the court's role, he said, to interpret the ACA in a way that is consistent with Congress' intent to improve health insurance markets, not to destroy them.

In a colorful and dismissive dissent, Scalia argued that the majority "has not come close to presenting the compelling contextual case necessary to justify departing from the ordinary meaning of the terms of the law. Quite the contrary, context only underscores the outlandishness of the court's interpretation. Reading the act as a whole leaves no doubt about the matter: 'Exchange established by the state' means what it looks like it means."

With numerous creatively expressed broadsides at the majority ruling ("interpretive jiggery-pokery, and "pure applesauce"), Scalia railed against the "outlandishness of the court's interpretation. Reading the act as a whole leaves no doubt about the matter: 'Exchange established by the state' means what it looks like it means."