Ten years to ponder our losses 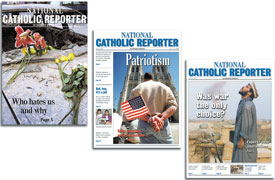 In the autumn of 2001, with the ghastly images of jetliner terror still fresh in the mind and the national urge to do something and get somebody building to crescendo, NCR published three issues focused on three distinct but related questions.

Time had not yet begun to dull the raw edge of grief when we asked those questions. Still fresh was the sense of vulnerability that invaded the culture as the country watched its twin symbols of power and economic superiority in lower Manhattan crumble to the ground. We were all shaken by the realization that a few overnight “pilots” were able to commandeer a jet and crash it into the nerve center of our national defense.

Even among NCR readers, who are as likely a group as any to maintain a level of skepticism about the decisions and actions of civil authority, the questions were not especially popular. Ten years later, having blown up two ancient cultures, and having made a seemingly endless commitment of personnel and national treasure to the maintenance of two open-ended wars, such questions are only compounded by deepening uncertainties.

Since 2001, the United States has spent more than $1.2 trillion on wars in Iraq ($792 billion) and Afghanistan ($446.5 billion), according to costofwar.com, a Web site maintained by the National Priorities Project. And the meter continues to run indefinitely. During that same period, the base budget for the Department of Defense has risen 38 percent, from $390 billion in 2001 to $540 billion in the 2011 budget. Adding the annual amount appropriated to the Department of Energy and other defense-related spending (basically, development of nuclear and other weapons systems) as well as the “war supplemental” that began at $21 billion in 2001 and went as high as $174 billion in 2008 before tapering off to $33 billion in 2010, the total increase in military spending during that period was 67 percent.

The human toll is, of course, incalculable. The numbers are sobering. In Iraq, 4,442 U.S. soldiers have died so far; 1,584 in Afghanistan, for a total of 6,026 killed in both wars, according to Cause, a group that works on behalf of military wounded. So far, 31,922 U.S. soldiers have been wounded in Iraq; 12,450 in Afghanistan. Total casualties for all coalition troops in both wars stand at 7,473.

We will never know how many Iraqis and Afghans died. Two of the mostly widely quoted sources don’t agree and both suggest their numbers are too low. Icasualties.org says 60,277 Iraqis (10,125 military and 50,152 civilians) have died in the conflict since the 2003 invasion; www.iraqbodycount.org gives a range of 102,212 to 111,724 deaths. These numbers are in addition to the thousands who died in the 1991 invasion and the more than 500,000 children under the age of 5 who died, according to a U.N. study, as a direct result of U.S.-imposed sanctions during the 1990s. Additionally, millions of Iraqis, mostly members of the middle class, now live as refugees in neighboring countries.

Both countries continue to teeter on the brink of chaos and, in Afghanistan’s case, a reversion to tribal wars. Corruption is rampant in both instances. Robust Jeffersonian democracy, former President George W. Bush’s dream of U.S.-imposed freedom around the globe, remains well out of reach.

We have lived through a decade of lost opportunities and squandered resources, human and material. Perhaps the most valuable lesson in all of this, if indeed it finally sinks in, is the realization that in an age of massive force and unimaginably destructive weaponry, power has its limits. On another’s turf, the other, no matter how primitive, seems always to have the advantage.

The bad guys are gone. Iraq’s Saddam Hussein, who provided the excuse for invasions and deadly sanctions, has long been dead. Osama bin Laden, mastermind of the 9/11 attacks, was more recently assassinated in his hideout in Pakistan.

Little has changed for the better. Trailing our efforts to seek vengeance is a sad litany that will haunt us for years: torture of suspects by U.S. interrogators, rendition flights of kidnapped suspects to extrajudicial sessions of interrogation and torture in third countries, and endless incarceration of foreign subjects without charge or legal representation in Guantánamo.

With all of that killing and exacted vengeance, the unfathomable costs in human life and treasury, the world is hardly a safer or more predictable place. One might argue convincingly that the military options and “security” tactics to which the United States so quickly resorted has provided terrorists with the images and rhetoric for motivating new generations of youngsters schooled in hatred of America.

Shortly after the Sept. 11 attacks, questions and thoughts that cut across the grain of the national wish for vengeance began surfacing from an unlikely source: people who had lost family members in the World Trade Center, the Pentagon and the downed plane outside Shanksville, Pa. They became a formal group in February 2002, calling themselves September Eleventh Families for Peaceful Tomorrows. Members didn’t always agree on how to proceed except for a basic conviction: that creating more families with missing members in other countries was not a rational answer to irrational violence. “By developing and advocating nonviolent options and actions in the pursuit of justice, we hope to break the cycles of violence engendered by war and terrorism,” the group declares on its Web site, peacefultomorrows.org.

In a book about the group, David Potorti, a journalist who lost an older brother in the attack on the World Trade Center, writes: “We refuse to believe in an us-versus-them world, recognizing instead that we can, and must, create the world we want to live in.”

The occasion, he said, forced a realization that “we could never be truly independent of each other ... that our children would never be safe unless unseen children on the other side of the world were safe as well.”

While the organization has made connections internationally and remains a remarkable voice in the conversation, theirs isn’t yet the language or the attitude of most 9/11 observances. It is difficult to talk about nonviolent alternatives when the country has gone to the brink of bankruptcy in its commitment to war.

There exists, however, a disarmingly pragmatic reason for seeking means other than massive force to contend with the very real threat of terrorist operations. And that reason is success. David Cortright, director of policy studies at the Kroc Institute for International Peace Studies at the University of Notre Dame in Indiana, said in a recent interview with NCR that there has been “a tremendous amount of success” in thwarting terrorist plots in recent years “not through wars but through quiet, behind-the-scenes work of security operations.” In other words, good old-fashioned police work.

Ten years later, it is still not easy to pierce the din of militarism and retribution with questions that seek to understand the enemy and with insights that point up alternatives to massive violence.

It might be, however, that we’ve spent our way in human, economic and political terms to the brink of a new view of things. Whether such understanding can find expression on the political stump is unknown. What is known is that there’s little future in going at the world with a bludgeon, even if you’re the mightiest around. Bombs, occupation and torture not only don’t work, ultimately they exact a price at home. When all is said and done, we’re left to ponder our losses and to wonder what’s become of us.