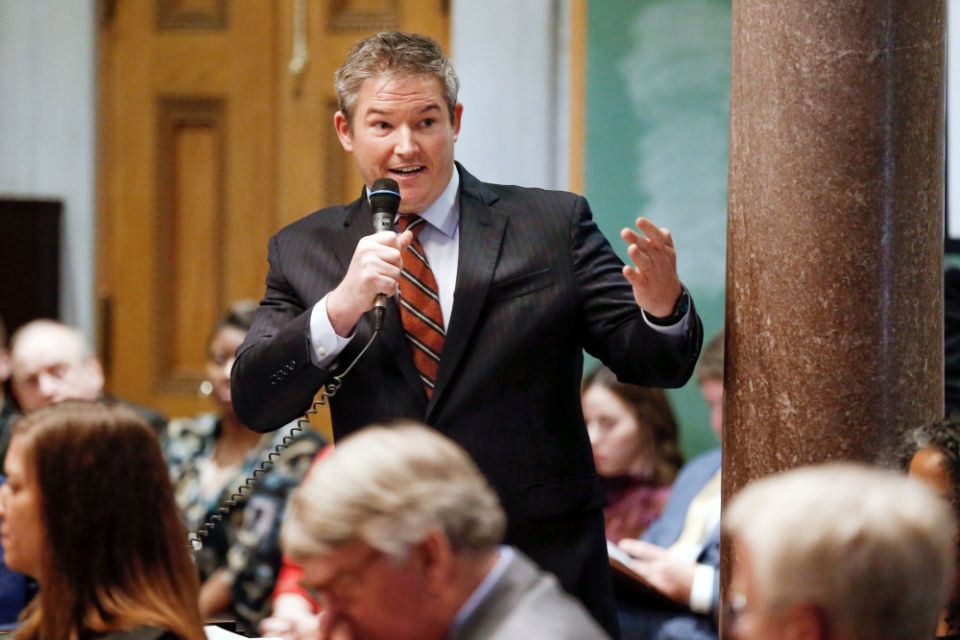 Sen. Jeff Yarbro, D-Nashville, debates a proposal allowing faith-based adoption agencies to decline to place children with same-sex couples because of their religious belief without facing penalties on the first day of the 2020 legislative session Tuesday, Jan. 14, 2020, in Nashville, Tenn. (AP/Mark Humphrey)

Nashville, Tenn. — Tennessee Gov. Bill Lee announced Jan. 14 that he'll sign into law a measure that would assure continued taxpayer funding of faith-based foster care and adoption agencies even if they exclude LGBT families and others based on religious beliefs.

The GOP-controlled Senate gave the bill final passage on the first day of the 2020 legislative session after it was initially approved by the House last April. The bill was sent to the Republican governor amid warnings by critics of possible negative consequences for Tennessee's reputation.

Lee's communication director, Chris Walker, confirmed in a statement Jan. 14 evening that the governor would sign the bill. Earlier, before the Senate vote, Lee declined to weigh in after saying he had not read the two-page bill.

"We are off to a fine start this session," state Sen. Steve Dickerson joked while debating against the bill earlier as the lone Republican opposed.

A handful of states to date have enacted similar legislation including Kansas, Oklahoma, Texas, Alabama, South Dakota, North Dakota, Virginia, Mississippi and Michigan. But Michigan agreed in settling a lawsuit to no longer turn away LGBT couples or individuals because of religious objections.

Nationally, supporters argue such measures are needed to protect against potential lawsuits hostile to the group's religious beliefs. However, critics counter that the proposals attack LGBT rights and limit the number of qualified families seeking to adopt or foster needy children.

"This bill is solely about freedom," said Sen. Paul Rose, the Republican sponsor of the bill.

Rose conceded he thought the bill wasn't necessary, pointing out that President Donald Trump's administration is currently proposing a rule that would impose the same protections. Yet he said he advanced the bill this year because there was no guarantee Trump would be reelected later this year.

Trump's proposal would rescind an Obama-era rule that prevented foster care agencies from receiving federal funds if they discriminated against families based on sexual orientation and gender identity.

Ultimately, 20 Republicans approved the bill while five other Republican members simply voted "present" even after some questioned the bill's benefits.

Dickerson was the only Republican to join the Senate's five Democrats in opposition. He said the bill would allow certain groups to limit the families where children could be sent, adding "I expect that waiting list to increase somewhat."

He added, "This will have a direct fiscal impact on the state, not to mention the humanitarian impact and emotional impact on those children who ... will now be in a foster setting for a longer time."

In 2011, Illinois declined to renew its state contract with Catholic Charities adoption services due to its policy of refusing child placement to same-sex couples. Catholic Charities has also stopped handling adoptions in Washington D.C., Massachusetts and San Francisco over concerns they would be required to act against their religious beliefs.

If the proposal becomes law as the governor has signaled, current adoption practices in Tennessee aren't expected to change. Some faith-based agencies already do not allow gay couples to adopt. But this measure would provide legal protections to agencies that do.

For example, denied applicants couldn't sue an agency for damages if the religious belief or moral conviction was cited as a reason.

The legislation sparked opposition from civil rights and foster advocates.

"The foster care system is at a critical juncture where it is required by new federal law to reduce the number of children placed in harmful group homes and to expand family home options for children who cannot safely return to their family of origin," said Currey Cook, counsel and director of Lambda Legal. "Children who need more homes, not fewer, should not suffer as part of efforts to chip away at equality for LGBTQ families."

Over in the House, lawmakers had less on tap on opening day though an unrelated political development unfolded.

Republican Rep. David Byrd confirmed he doesn't plan to seek reelection this year. Byrd had been accused of sexual misconduct by three women when he was their high school basketball coach and a teacher decades ago, before being elected. He was reelected in 2018 despite the accusations.

Byrd said he told GOP colleagues in an August closed door gathering that he wouldn't run again, as The Tennessean had reported.

"I told my caucus I wouldn't go run, and I hate to go back on my word, even though I'm getting a lot of pressure put on me in my district to run,"  Byrd told The Associated Press.

Byrd had apologized to one of the women in a phone call she recorded in early 2018, but didn't detail his action and denied anything happened with other students.

He said he might change his mind and seek reelection if protests continue over the allegations. Another Republican has filed for his seat.