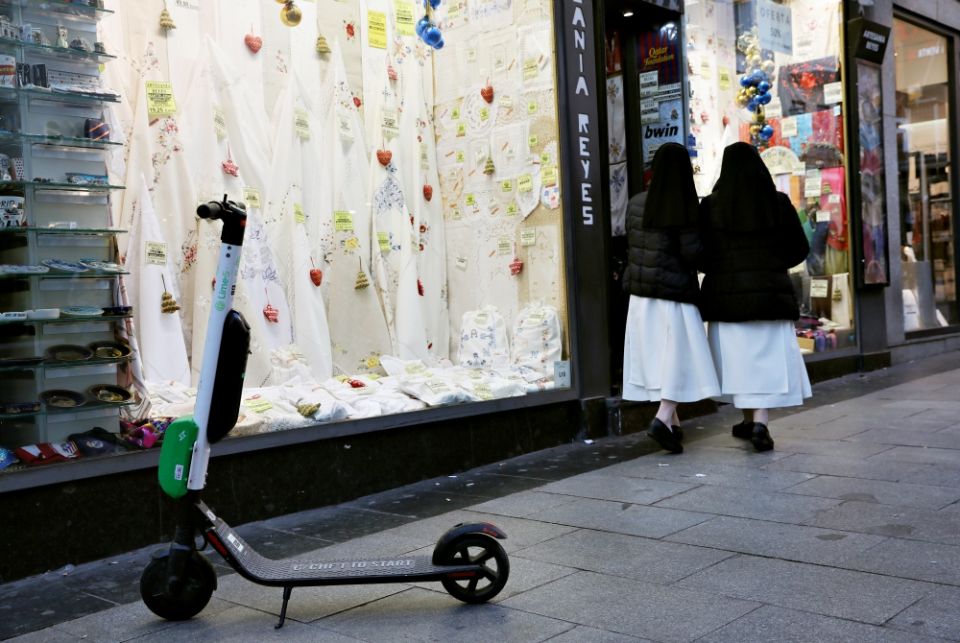 When Spain's socialist prime minister, Pedro Sánchez Pérez-Castejón, was narrowly voted back to office in early January, he deplored the "toxic atmosphere" of Spanish politics, assuring parliamentarians he would work for "dialogue and justice."

"This new administration offers some light, but also presents many shadows," explained Cristina Sánchez Aguilar, editor-in-chief of the Catholic Alfa y Omega weekly. "Spain is a nondenominational state and we want the government to understand the importance of respecting maintaining normal ties with religious faiths. But we're alarmed by society's polarization. Many Spaniards, Catholics included, have transformed the sense of uncertainty into open rejection and the trading of insults."

Sánchez Pérez-Castejón, a 47-year-old economist, was sworn in by King Felipe VI on Jan. 8, a year and a half after first becoming head of government — declining, as a self-declared atheist, to take the traditional oath on a Bible and crucifix.

His Socialist Workers' Party, PSOE, won just 120 places in the 350-seat congress in a November 2019 general election, forcing it to seek allies.

It spent the next two months negotiating with the far-left Podemos ("United we can"), led by Pablo Iglesias, a former TV presenter and political science lecturer. 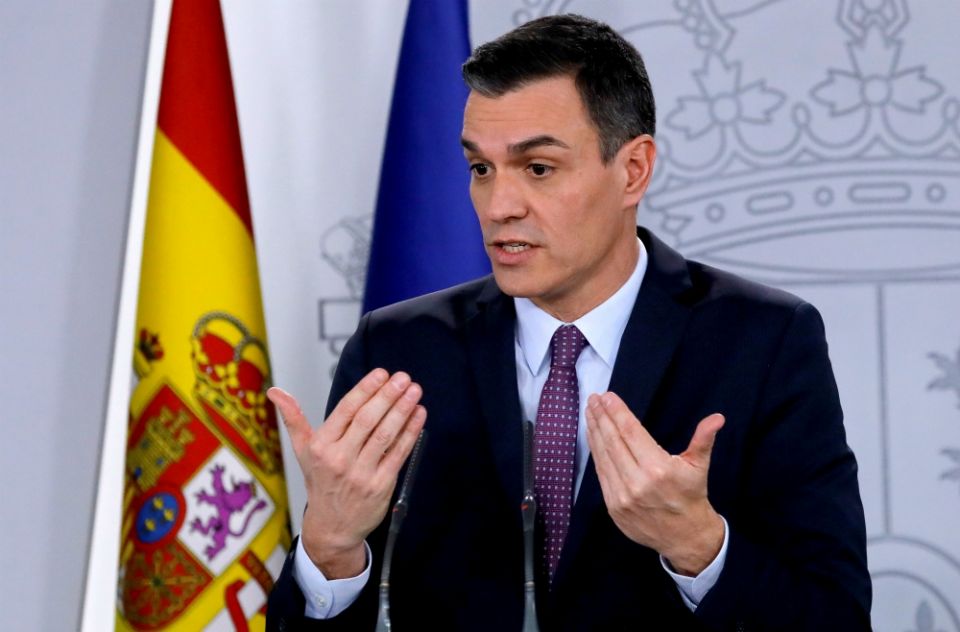 But the new coalition holds a majority of just two seats over the center-right opposition, whose principal parties — the mainstream Partido Popular ("People's Party") and the more outspoken Vox — have attacked Sánchez's policies on immigration and taxation, as well as his pledge of "dialogue, negotiation and agreement" with Basque and Catalan separatists.

Church leaders, meanwhile, have voiced deep unease over other points in the coalition's 50-page program, published on Dec. 30, 2019, which appears to rerun, this time more radically, policies that sparked church-state tension in the past.

Section 2 envisages making religious teaching entirely voluntary in schools and enhancing "affective-sexual education," while Section 5 will guarantee "the secularity of the state and its neutrality against all religious confessions," and facilitate "recovery of assets improperly registered by the Church."

Section 7 promises "feminist policies," and is likely to extend abortion rights to 16-year-olds without parental consent, while curbing pro-life campaigning near abortion clinics.

In a conciliatory message, Cardinal Ricardo Blázquez Pérez of Valladolid, the Spanish bishops' conference president, told Sánchez that church leaders believed "authentic religious life" contributed to "the general good of Spanish society," and would offer "loyal and generous collaboration" in helping his new government "work in service of the common good."

However, Cardinal Carlos Osoro Sierra of Madrid urged citizens to avoid being "dragged toward polarization," while Archbishop Jésus Sanz Montes of Oviedo said on Twitter he was asking the Virgin Mary to "save Spain" from coming "clouds and storms."

"If you look closely, it contains a cultural and anthropological vision of reality that goes beyond economics — a vision of man that seeks to generalize everything, approving euthanasia, extending new rights in gender ideology and radical feminism, and expounding a version of history that fosters hatred and resentment," said the cardinal, who was prefect of the Vatican's Congregation for Divine Worship in 2008-14. "There is already talk of an immediate global economic crisis more serious than the last — but even graver will be the cultural and identity crisis if this coalition enters government."

Since first taking office in June 2018 after Prime Minister Mariano Rajoy's center-right government was brought down by a censure motion over corruption, Sánchez's PSOE has clung to power as a minority, facing accusations of straying beyond its mandate by pushing radical changes.

Yet the government has persisted, insisting its policies reflect "pressing social needs."

And in October 2019, one of its flagship measures came to fruition with the televised reburial of Spain's former dictator, Gen. Francisco Franco (1892-1975), despite protests by right-wing devotees.

The remains of Franco, who ruled for four decades after the 1936-39 Spanish Civil War, were exhumed from his tomb in the ornate Valley of the Fallen basilica outside Madrid, and reinterred in the capital's Mingorrubio Cemetery with official church approval. 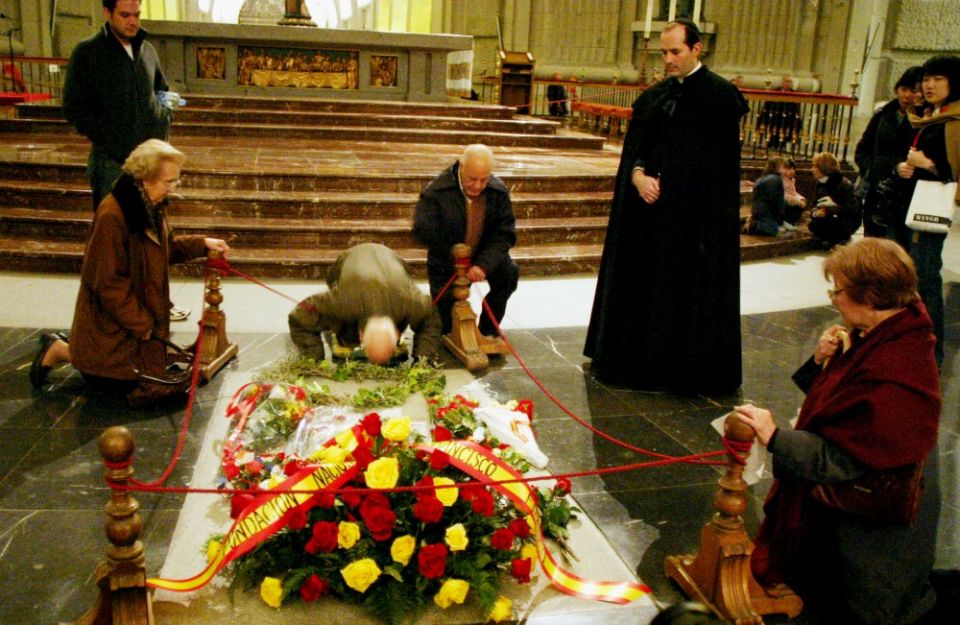 People visit the tomb of Gen. Francisco Franco in 2015 in San Lorenzo de El Escorial, Spain. In October 2019, Franco's remains were exhumed from his tomb in the Valley of the Fallen basilica, and reinterred in Madrid's Mingorrubio Cemetery. (CNS/Reuters/Susana Vera)

But it divided Spanish opinion, and in July, the Vatican's nuncio, Archbishop Renzo Fratini, resigned after criticizing the Sánchez government's actions and facing Spanish counteraccusations of interference.

Tension over the issue looks set to continue, since the new coalition has now pledged to exhume Franco's victims and prohibit any public "exaltation of Francoism," while making Oct. 31 a day of remembrance.

Although 67.4% of Spain's 47 million inhabitants still nominally belong to the Catholic Church, according to summer 2019 figures, only a small proportion attends Mass, while the average age of clergy in the church's 23,021 parishes stands at around 65, and many of its 70 dioceses have no priestly vocations.

Catholic sacraments such as baptism and first Communion have also plummeted across the country, with four-fifths of marriages now celebrated outside church. Half of citizens aged 18-24 now disclaim any religious affiliation.

When the PSOE was in power under Prime Minister José Luis Rodríguez Zapatero in 2004-11, it also clashed with Catholic leaders over secularizing reforms, which included relaxing Spain's divorce laws and legalizing same-sex marriage.

By backsliding on religious education in schools, PSOE was also accused of violating Spain's 1979 accords with the Vatican — prompting Sánchez's government to demand the accords' renegotiation in 2018.

Yet with more than 17,000 priests, 40,000 religious order members and 101,000 catechists, and a huge network of schools and hospitals, welfare and environmental programs, the Spanish church remains a force to be reckoned with. If challenged directly, it's likely to respond with firmness. 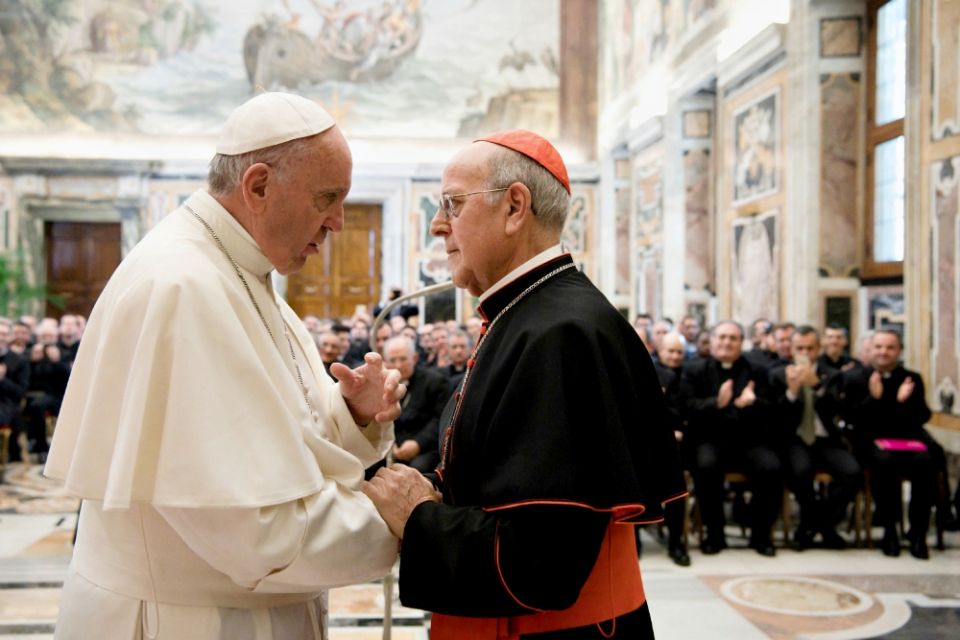 Pope Francis greets Cardinal Ricardo Blázquez Pérez of Valladolid, Spain, during an audience with seminarians and faculty of the Pontifical Spanish College of St. Joseph at the Vatican April 1, 2017. (CNS/L'Osservatore Romano, handout)

One area of tension will be the government's pledge to recover "improperly registered" church assets. In 1998, a mortgage law reform enabled the church to claim formal ownership of some 16,000 lands and properties it had been allowed to use under a concessionary Franco-era law.

Although the possibility, seen by many as a legal loophole, was removed in 2015, the ownership titles remained in place; and the new government seeks to reverse this, arguing the assets should revert to public ownership.

Church spokesmen say they're open to negotiation on the issue. But they insist the lands and properties should be examined case-by-case, rather than handled in a generalized manner.

"Spain's constitution makes it a nonconfessional state, rather than a secular one — which means religiousness isn't relegated to the private sphere, but can also manifest itself in public," Sánchez Aguilar of Alfa y Omega told NCR. "We've trusted that the church and different administrations can maintain normal relations in pursuit of the common good, as has always happened in democracy, and we think there are channels for expressing discontent without dehumanizing political rivals."

Not all Catholics are speaking with such restraint.

The right of parents to choose "religious and moral training in line with their convictions" was guaranteed under Article 27 of the Spanish constitution, insisted the confederation, whose 5,939 schools employ more than 82,000 teachers and educate more than 1.2 million pupils — as well as by European Union regulations and international law.

Meanwhile, the president of Spain's Family Forum, or Foro de la Familia, Ignacio Garciá-Juliá, also lashed out at Sánchez when he announced plans to withdraw a direct state subsidy paid to it since 2003. 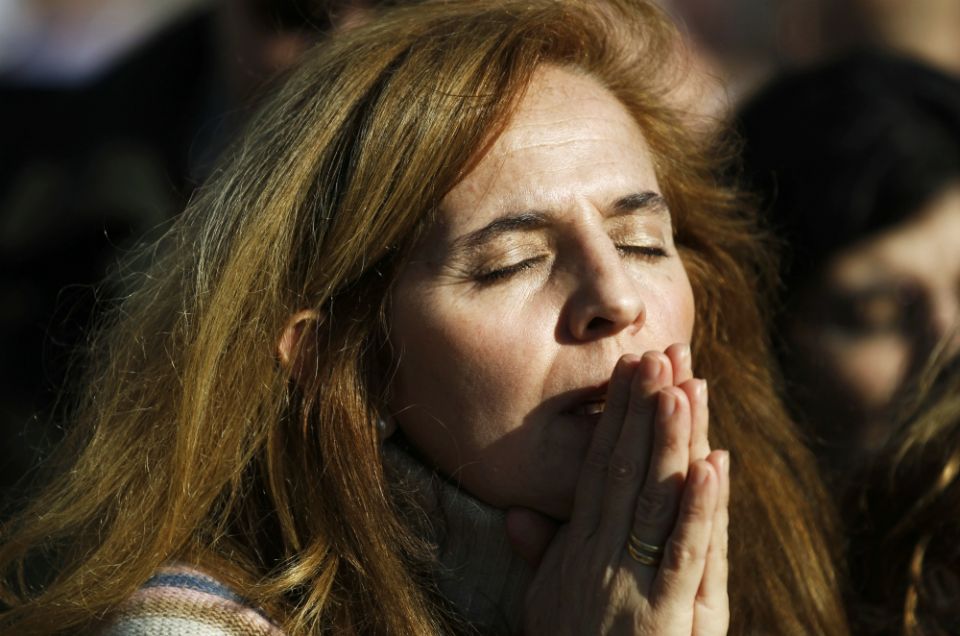 A woman prays during Mass in favor of the traditional family unit in central Madrid in this 2011 file photo. (CNS/Reuters/Susana Vera)

"This acting government is using totalitarian methods to stifle critical entities for exclusively ideological reasons," Garciá-Juliá, whose forum represents more than 4 million Spanish families, said in a statement. "We will campaign to demand respect and equal treatment for dissenting entities, for norms of democracy and plurality to be upheld, and for dissidents not to be persecuted and punished unfairly. This is the attitude of totalitarian regimes, not of consolidated democracies."

With economic growth in decline, and public debt running at 86% of GDP after 12 years of imposed austerity, Sánchez's team will have little money for ambitious social projects.

But while also declaring himself a nonbeliever, Iglesias, now vice prime minister, has expressed sympathy for Pope Francis.

And while views may be divided on some coalition policy priorities, such as a wealth tax on corporations and measures to boost reindustrialization, some parts of its agreed program should suit Catholic social teaching.

Section 7's proposals to curb pornography and surrogacy should be welcome, Catholics argue, as should Section 11, which will improve the reception of refugees, fight human trafficking and set up a State Integration Fund for migrants. So should Section 1 on employment and training, Section 2 on improvements to housing, pensions, health and social security, or Section 3 on climate change and environmental protection.

Though tension may rise over the government's perceived anti-Catholic stance, this shouldn't overshadow good elements in the "progressive coalition" program.

"After the intense debate surrounding its formation, the new government has formed an incongruous and volatile majority. We can assume there'll be tensions between the coalition partners whenever budgets have to be approved," Sánchez Aguilar told NCR. "But the church will be there to defend the people. We should expect to reach agreements and work for the common good that is Spain."

Spain's Catholic bishops were expected to coordinate responses to the new government during their annual spiritual exercises in January, which coincided with the accreditation of a new Vatican nuncio, Archbishop Bernardito Auza.

Meanwhile, a pledge of goodwill has come from Bishop Luis Argüello García, secretary-general of the bishops' conference, who assured the Madrid-based Ecclesia Revista magazine that the church was ready to consider "a new relationship more in line with the characteristics of today's society."

"The church isn't seeking privileges — but nor does it want to be discriminated against," Argüello added. "Our welfare state depends on the Spanish church's active role in education, health, social services and care for the elderly. Instead of considering it a residue of the past or a nest of privilege, the authorities should value its work with generosity and solidarity."

For now, however, with perspectives and loyalties polarized, the immediate future looks uncertain.

Opponents of the government insist there's no groundswell of support for radical change — or for concessions to Catalonia, the wealthiest and most restive of Spain's 17 autonomous regions, where nine former members of Carles Puigdemont's separatist government were jailed in October 2019, triggering prolonged riots.

In this troubled atmosphere, Spain's bishops will have to read carefully to avoid being caught in political crossfire.

In October 2019, Madrid's Almudena cathedral, Catholic university and apostolic nunciature were daubed in graffiti protesting the church's acquiescent stance over the Franco reburial.

In November 2019, Spain's Office for Democratic Institutions and Human Rights reported a sharp rise in anti-Catholic incidents, such as the disruption of a Catholic-sponsored conference on abortion at Madrid's King Carlos University. 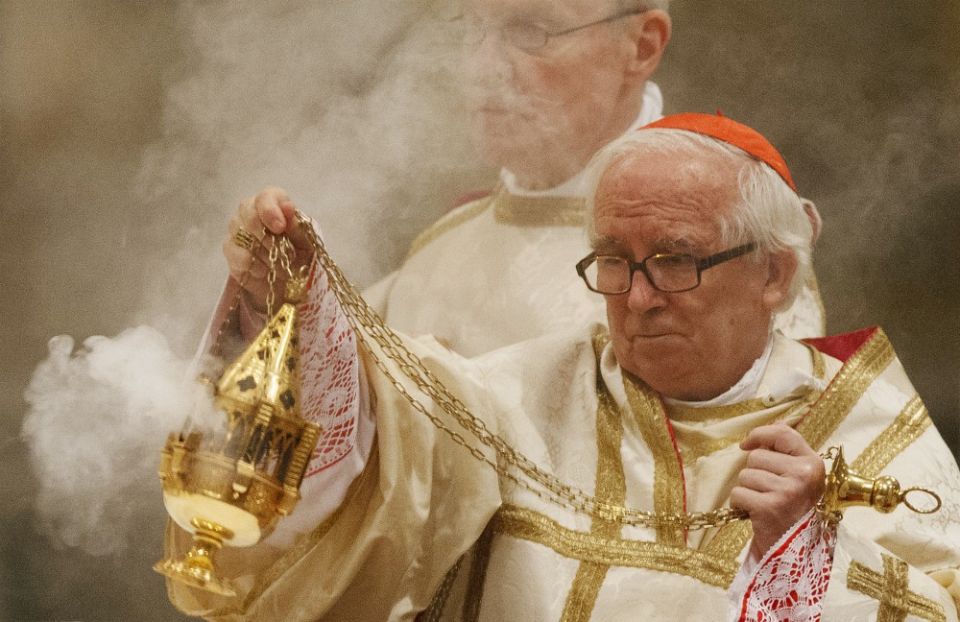 Cardinal Antonio Cañizares Llovera uses incense during a solemn pontifical Mass in the extraordinary form at the Basilica of St. John Lateran in Rome in a 2010 file photo. (CNS/Paul Haring)

"Spain faces a critical situation, a true emergency for our future," Cañizares Llovera told Catholics in an outspoken pastoral letter in January.

"I strongly urge and get on my knees before everyone that today and in days to follow, as long as this uncertain future remains unclarified, to ensure special prayers and Masses for Spain are held intensively in all churches," the cardinal said.

Bernie Sanders is wrong: Pope Francis is no socialist