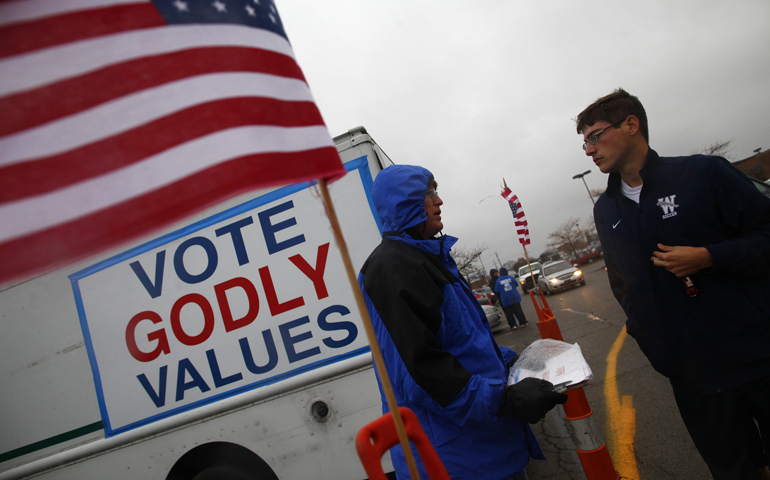 As the bishops gather in Baltimore this week for their annual meeting, they, like everyone else in the country, will be talking about last week's election. The U.S. Catholic bishops took a beating at the polls. Not only was President Barack Obama re-elected despite their attacks on him, the bishops also lost on state referendums on same-sex marriage.

Like all Americans, the bishops have a constitutional right to participate in the political process. They can debate the issues, criticize candidates and publicly express their views. They can even endorse candidates as long as they don't do it on church property and don't use church funds in supporting a candidate or party. In fact, they can even run for president, as did the Rev. Pat Robertson and the Rev. Jesse Jackson. The U.S. Constitution does not forbid this; Roman Catholic canon law forbids it.

But what is constitutional is not always effective or prudent. Clearly, the political strategy of the bishops is not working. A majority of Catholics voted for Obama, and gay activists won every referendum. The Missouri and Indiana Republican senatorial candidates, who took the toughest positions on abortion, were also defeated when the Republicans were expected to win these races.

So where do the bishops go from here? Some of the bishops will blame Catholic pro-abortion-rights politicians and urge excluding them from Communion. The nuns, priests and theologians who urged voters to consider a wide range of justice issues will also be blamed. These bishops will see no need for a change in political strategy. "The bishops need to be tougher; dissidents need to be punished; full speed ahead!"

Many bishops, who stayed quiet during the election, are tired of the notoriety the political bishops invite. They prefer their parishes be free of partisan politics. But since the media have trouble covering silence, the political bishops get all the ink and airtime. This makes it look like these bishops are speaking for all bishops.

Hopefully, behind closed doors, some bishops will acknowledge that the current strategy is not working and ask, "Is there a better way? Is there a plan B?" Here I am writing as a political scientist, not as a priest or theologian. I am not challenging church teaching; I am questioning political strategy.

The first step in plan B should be listening. The bishops need to listen to those Catholic voters who ignored their advice and find out why. The whole premise behind "No Child Left Behind" is that when students fail, it is not always their fault. Teachers need to examine how they teach so students can learn. Bishops need to listen.

Second, any new strategy needs to be realistic. Granted the current political situation, what is possible? Political strategy cannot ignore data. In the last election, Republicans ignored poll data and truly believed they would win the presidency and the Senate. The great wave of Republican voters never appeared.

What are the data the bishops need to examine?

First, it is clear there is an approaching tsunami of young voters who will eventually make same-sex marriage legal in most states of the union. The likelihood of stopping this tsunami is very low. As the older opponents of gay marriage die, they are replaced by younger voters who have friends who are gay. This is a new world. If you know you are going to lose a fight, you want to fight in a way that does you the least amount of damage. Tactics that enrage their opponents will make it more difficult for the bishops to get the exemptions they desire under this new reality.

For example, after the bishops spent $1 million fighting gay marriage in Massachusetts, it was not surprising that gay activists fought exempting Catholic foster care and adoption services from serving gay couples. They saw it as political payback. Ultimately, the bishops may be forced to treat same-sex couples the same way they treat divorced and remarried couples whose marriages are not approved by the church. The church does not like these marriages, but they are acknowledged as legal under civil law.

Second, despite all efforts by the bishops and by anti-abortion activists, the country is just as divided on abortion today as it was decades ago. Public opinion polls show people do not like abortion, but they do not want to make it illegal. No one has come up with a strategy to change the public's mind. Even if Roe vs. Wade were overturned, abortion would still be legal in most of the country. Those living in a state where it is illegal could easily drive to a state where it is legal.

If making abortion illegal is an impossible dream in the current political environment, what is plan B? Plan B has to be working with politicians of any stripe, including pro-abortion-rights politicians, in supporting programs that will reduce the number of abortions.

The bishops must reach out to all politicians and groups who are willing to support programs that help women keep and raise their children. It is possible to agree with politicians on some things and disagree with them on other things. Simply aligning the church with Republican politicians, who promise to do something about abortion but then cut programs that help women, is a failed strategy. Instead of making things better, it makes them worse. Plan B means returning to the consistent ethic of life promoted by the bishops in the past.

Some bishops will reject such a strategy as pragmatic and not prophetic. But we live in an imperfect world. Granted the impossible dream of making abortion illegal, then the moral imperative is to do everything possible to reduce the number of abortions.

The bishops also need to put aside tactics that are counterproductive. Using excessive rhetoric, like comparing the president to Adolf Hitler or Joseph Stalin or accusing the administration of waging war on religion, makes it difficult to form coalitions to reach achievable goals.

Banning pro-abortion-rights Catholic politicians or Catholic voters from Communion is counterproductive. Such banning is not the official position of the church, but enough bishops are doing it (and few bishops are criticizing the practice) that many see it as church policy. Any time you have to use power rather than persuasion in a political debate, you have lost. It also reinforces seeing abortion as a Catholic issue based on faith rather than a human rights issue based on reason.

Banning pro-abortion-rights politicians and gay-marriage supporters from Catholic universities is also counterproductive. It makes the bishops look weak rather than strong. It tells the world that the bishops think their arguments are so weak they cannot allow students to hear their opponents. Any strategy based on censorship rather than persuasion has failed before a word is spoken. The church should be on the side of free and open debate because "Catholic tradition maintains," in the words of Benedict XVI, "that the objective norms governing right action are accessible to reason, prescinding from the content of revelation."

I do not claim to have an infallible strategy for the bishops, but after such a momentous defeat, it is time for the bishops to re-examine their political strategy. The current strategy is not working, and there is no indication it will work any better in the future.