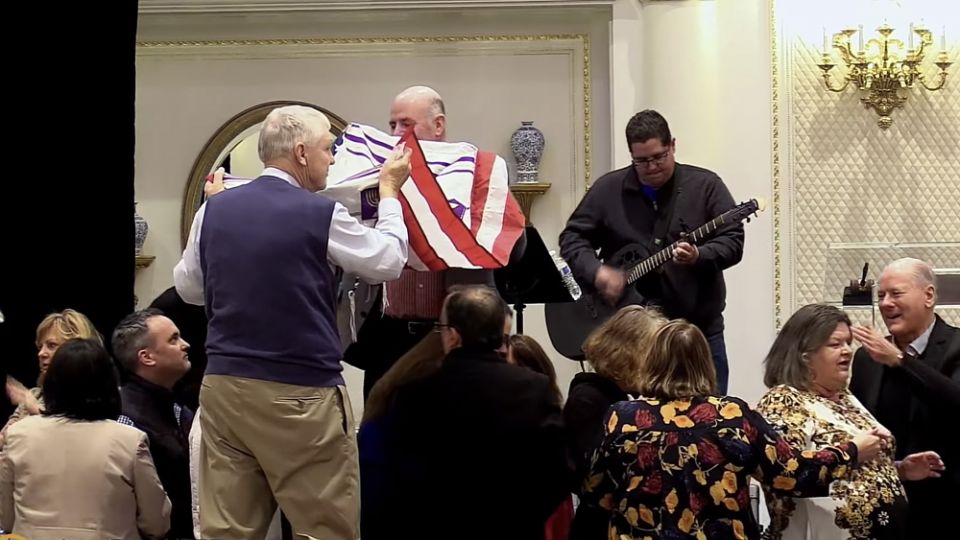 Worshippers at the Revolution 2018 conference are commissioned at the Trump International Hotel on Dec. 8, 2018. (Screenshot via livestream)

Washington — The Trump International Hotel in Washington, D.C., which towers above other buildings near the White House, is best known for hosting global diplomats and prominent dignitaries in its lavish facilities.

But on Dec. 7, one of the hotel's many glimmering ballrooms was transformed into a sanctuary, where dozens of worshippers held their hands aloft and spoke in tongues as Jon Hamill, co-founder of Washington, D.C.-based Lamplighter Ministries, led the group in prayer.

Hamill — whom supporters describe as a prophet — closed his eyes tightly and shouted above the chattering: "In Jesus' name, we declare the Deep State will not prevail!"

He then hammered a judge's gavel onto a podium as people raised their voices in approval.

It may seem unusual to mix ecstatic worship with a popular conservative theory that Donald Trump's administration is being sabotaged from within by government officials installed by previous presidents. But last week's Revolution 2018 conference (Dec. 6-8), organized by Hamill and Lamplighter Ministries, offered a rare glimpse into a peculiar subgroup of faith-fueled Trump support: a loose network of charismatic Christians who see his election and presidency as a catalyst for a spiritual "turnaround" in America, even as the nation is under siege by forces of spiritual evil.

Speakers at the conference described visions, prophesies, direct conversations with God and encounters with angelic beings — all hallmarks of charismatic Christianity. But while some charismatics shy away from explicit political speech, those assembled in Washington over the weekend claimed to see a direct tie between politics and the spiritual world.

It's an approach that's proved controversial.

Attendees were originally slated to gather at the Museum of the Bible, but organizers were forced to scramble to find a new venue when academics and news reports pointed out potential conflicts between the conference's political edge and the museum's politics-neutral mission.

The museum later said in a statement that the impetus for the move had to do with restrictions on religious services.

Hamill turned down a request for a full interview. And the event was officially closed to the press, which organizers said was at the request of the hotel. (The proceedings were livestreamed for a small fee.) But he did tell Religion News Service that he holds no ill will toward the museum.

Hamill also rejected the idea that his group was "right wing." Instead, he insisted that the "eagle" of America needs "a strong right wing and a strong left wing," and losing one would result in the nation "flying in circles."

Yet conference speakers repeatedly cast Trump administration officials as agents of God. And they urged the gathering of "intercessors" — believers who offer invocations on behalf of others — to aid the White House through prayer. Doing so, they argued, would help bring about a cosmic, spiritual "turnaround" for the nation.

"I saw headlines that President Trump had one of the most difficult days of his presidency yesterday," Hamill told the assembly on Saturday. "It is extraordinary to me that … God drew the finest group of intercessors on the planet to come here and pray through that darkest hour of President Trump's presidency."

Brad Christerson, professor of sociology at Biola University and an expert on the broader charismatic movement, said the Lamplighter Ministry group appears to be part of what he calls "independent network charismatic Christianity," one of the fastest-growing religious groups in the country.

While charismatics have been around for some time, the specific political theology preached at the Revolution 2018 conference and elsewhere is a relatively new trend.

"They really think God installed Donald Trump to then install other people in the government to have what they call 'kingdom values,'" Christerson said, speaking generally of the movement. "We call it 'trickle down Christianity.'"

Christerson, co-author of The Rise of Network Christianity, also noted that the group's preferred methods of political influence are distinct from religious right leaders who champion traditional grassroots organizing.

"They really feel that they're involved in this spiritual battle to take over the world, but their tactics are pretty much all supernatural," he said.

Hamill explained the Revolution 2018 conference was set during the Jewish holiday of Hanukkah so that it could usher in a spiritual shift "to a nation that desperately desires it."

Chuck Pierce, president of Glory of Zion International Ministries, said worshippers at the event would face off against evil forces — "a season of demonic confederacies" — in every U.S. state.

"A NEW DAY is breaking in AMERICA!!" read a slide during Pierce's presentation, which he said were God's words to him. "FROM STATE TO STATE BORDER WARS ARE BEGINNING! THE DAY OF BIPARTISAN RULE HAS NOW SHIFTED! A NEW RULE FOR A NEW ERA! This is a TIME TO PROPHESY!"

Speakers also appeared to adopt Trump's rhetoric. Although Hamill, a former photojournalist, championed the idea of a free press, he and others invoked the idea of "fake news." His wife Jolene, co-founder of Lamplighter, called on worshippers to repent for trusting certain media sources.

"We need to repent of drinking the cup of the media, because it is a false cup," she said, closing her eyes and lifting her hands in prayer.

She later added: "We repent for getting our information, intel and all kinds of things from a false media network."

Conference speakers repeatedly suggested their prayers helped bring about some of the president's major achievements and hinted at an unusual level of access to the Trump administration.

Hamill told attendees a story about visiting the U.S. State Department in July with a group of faith leaders — including some at the Revolution conference — and encountering Sam Brownback, the U.S. ambassador-at-large for international religious freedom. He said the ambassador invited the group into his office where they prayed for pastor Andrew Brunson, who was imprisoned by Turkish officials at the time. 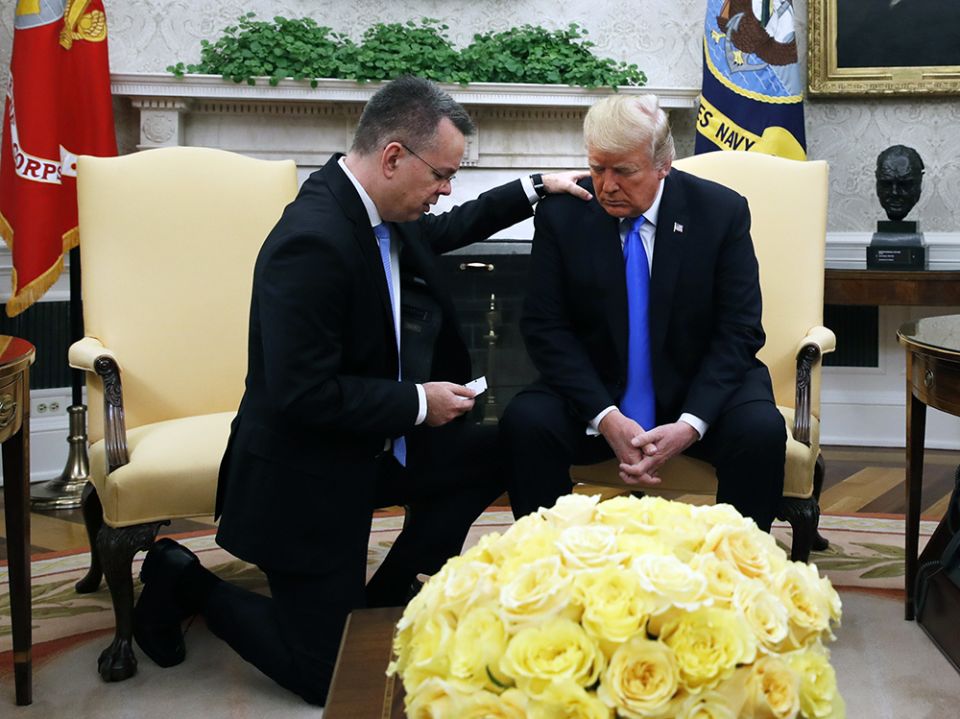 President Trump prays with American pastor Andrew Brunson in the Oval Office of the White House on Oct. 13, 2018, in Washington, D.C. Brunson returned to the U.S. after nearly two years of detention in Turkey. (AP/Jacquelyn Martin)

"We have governmental leaders throughout the Trump administration who love Jesus with all of their heart, and they are giving their all for this nation and for God's dream for this nation," Hamill said.

Three days later, said Hamill, Brownback announced at a major gathering on religious freedom that Brunson had been released from prison and put under house arrest.

Brownback's office did not respond to a request to confirm the story.

Brunson, who was eventually returned to the U.S. in October, was slated to speak at the conference on Friday, but the livestream was unexpectedly cut. Organizers sent a message to viewers saying they needed to edit out "sensitive data," and links to videos of the session have since been disabled.

At least one speaker saw God's hand at work in American politics as the gathering was going on.

On Friday, speaker Rick Ridings interrupted the proceedings to tell attendees he had just been in the hotel atrium, watching news coverage of former FBI director James Comey's testimony about the Russia investigation on Capitol Hill, when Trump attorney and former New York City mayor Rudy Giuliani walked in and sat down near him.

"It just seemed like a sign from the Lord," he said before reading from Psalm 35:4-9, in which the psalmist calls on God to destroy enemies by making them "fall into the pit, to their ruin."

"Just hours after we prayed … we saw Brett Kavanaugh get into office ... the vineyard was secured," Hamill said. "The justice of our time (is) shifting from a covenant of death empowering a future of death to a covenant of life empowering a culture of life." 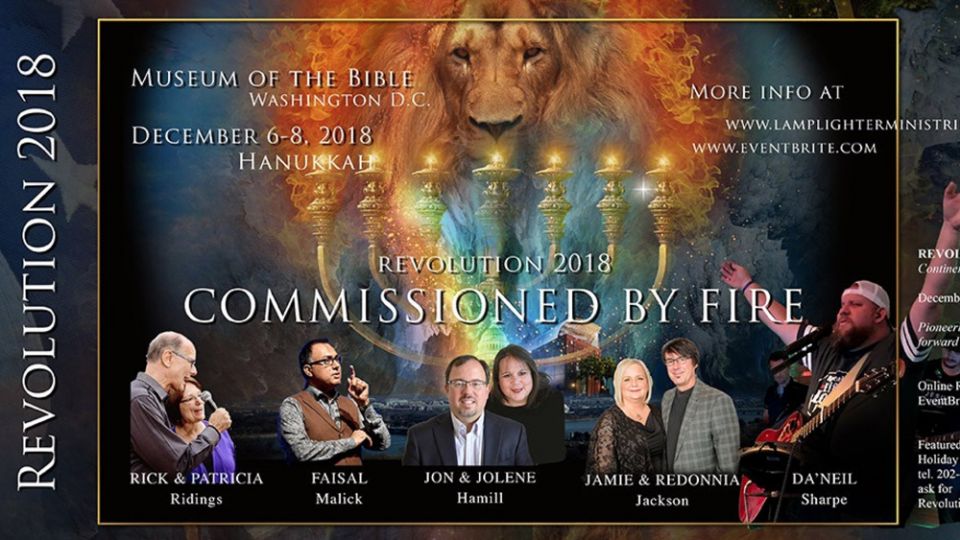 The original poster for the Revolution 2018 Commissioned By Fire event that was to be held at the Museum of the Bible in Washington. (Screenshot)

Organizers of the event believe God's involvement in American politics began long before the Trump administration.

Hamill claimed the American Revolution was rooted in the rallying cry "no sovereign but God and no king but Jesus" — a phrase popular in stalwart Christian nationalist circles but the origin and significance of which is debated by historians.

He also said that at times, America fell short of its divine calling. "Our forefathers and founders got something wrong," he said, by allowing the institution of slavery to persist.

Hamill argued the end of slavery and the civil rights movement were a sign of the nation's spiritual progression toward Christian freedom.

"What Abraham Lincoln began, Martin Luther King brought to fulfillment," he said. He then shortened the phrase to stress its Biblical overtones, again blurring the literal and the metaphorical: "What Abraham began, the king brought to culmination."

This Christian-centric understanding of the United States was often paired with references to the importance of the state of Israel. Hamill gave thanks for Trump "realigning" America with God's "covenant nation of Israel." Leaders also often showcased an affinity for traditionally Jewish traditions such as Hanukkah and placed a menorah on stage.

The layering of these two ideals was made literal on the second day of the conference when organizers stood at the front of the room and placed an American flag underneath a Jewish prayer shawl, also known as a tallit. Volunteers then held both objects aloft together as participants walked beneath them to receive an anointing for commissioning into "the freedom movement."

As they passed, some collapsed in ecstatic revelry.

Chuck Pierce praised Trump for recognizing Jerusalem as the capital of Israel earlier this year.

Politics | At Trump's hotel, spiritual warriors pray for the president in his 'darkest hour'