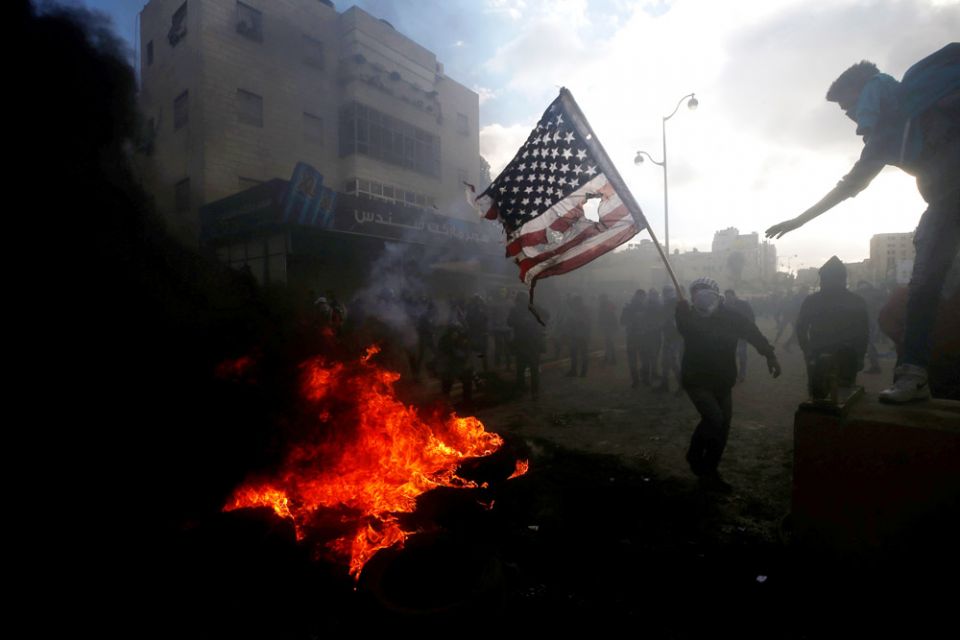 How the pursuit of peace in the Holy Land moves forward has become hazier, longtime observers say, in the wake of President Donald Trump announcing formal U.S. recognition of Jerusalem as the capital of Israel.

Following Trump's Dec. 6 proclamation, which included plans to move the U.S. embassy from Tel Aviv to Jerusalem, demonstrations have broken out in the areas surrounding the ancient city. Israeli forces have exchanged rocket fire with Hamas, which called for a "day of rage" in response to the new U.S. position. At least four people have been killed.

While Trump stressed that the decision posed no detour from U.S. commitment to peace talks between Israel and Palestine, longtime observers of the conflict see the move as a serious blow to the possibility of those negotiations restarting in earnest any time soon.

"Peace talks are nowhere and the distance between nowhere and somewhere has gotten bigger," said Jesuit Fr. Drew Christiansen, a senior research fellow at the Berkley Center for Religion, Peace and World Affairs at Georgetown University.

Christiansen, a professor of ethics and global human development at Georgetown's School of Foreign Service, called the president's move "a real mistake" that undercuts not only his negotiators but U.S. standing on the global scene.

"He diminishes the influence of the U.S. tremendously throughout the world by showing he will go against world opinion on a whim," he told NCR.

In a statement issued Sunday, the Vatican said it has followed closely the situation in Jerusalem and the Middle East, with Pope Francis "expressing sorrow" for those who died in recent days.

"The Holy Father renews his appeal to the wisdom and prudence of all and raises fervent prayers that the leaders of the nations, in this moment of particular gravity, undertake to avert a new spiral of violence, responding with words and deeds, to the yearning for peace, justice and security of the populations of that tormented land," the statement read.

The Vatican restated its position on Jerusalem for "the indispensability of respect for the status quo" and added that a negotiated two-state solution between Israelis and Palestinians was the only way to ensure their coexistence in the region and "a stable and lasting peace."

Before Trump announced the move, Francis joined others, including the patriarchs and heads of churches in Jerusalem, in calling for the U.S. to uphold its long-held position as it pertained to Jerusalem.

The day after the president's decision, the words "Respect the Status Quo of Jerusalem" blazed on front page of the Vatican newspaper L'Osservatore Romano.

The Arab American Institute said in a statement that the U.S. departure from the status quo was "a devastating blow" to Muslims and Christians living in Israeli-occupied parts of Jerusalem, as well as to U.S. relations with Arab allies and with people of the Muslim faith.

"We agree with the President that Israel, like all countries, has the right to determine the location of its capital," the Jewish Council for Public Affairs said in a statement.

David Bernstein, the council's president, was in Israel at the time of the announcement, where he said "the vast majority of Israelis," including those politically aligned along the center-left, greeted it with appreciation.

While the decision brought inherit risks, Bernstein told NCR it would be "untenable" for the U.S. to hold back because of the potential for violence. He added, "We should welcome the decision as a long overdue recognition of Israel's just and historic claims, not to mention the reality on the ground."

The American Jewish Congress called the move by the Trump administration a "historic acknowledgment" that "recognizes Jerusalem's just and rightful position as the heart of the Jewish State."

Bernstein added that American Jews hoped that U.S. recognition of Jerusalem as Israel's capital "would set a precedent for the rest of the world."

In the days since, no other country has followed the U.S. in that recognition or announcing plans to relocate its embassy. During a special meeting Friday of the U.N. Security Council, the global body's special coordinator for Middle East peace said the U.N. position on Jerusalem — that it remain a final status issue determined through a negotiated settlement — remained unchanged.

At the same meeting, each of the other 14 nations on the Security Council rebuked the unilateral U.S. move. Afterward, a joint statement from the ambassadors of Britain, France, Italy, Germany and Sweden said the U.S. decision "is not in line with Security Council resolutions and is unhelpful in terms of prospects for peace in the region." 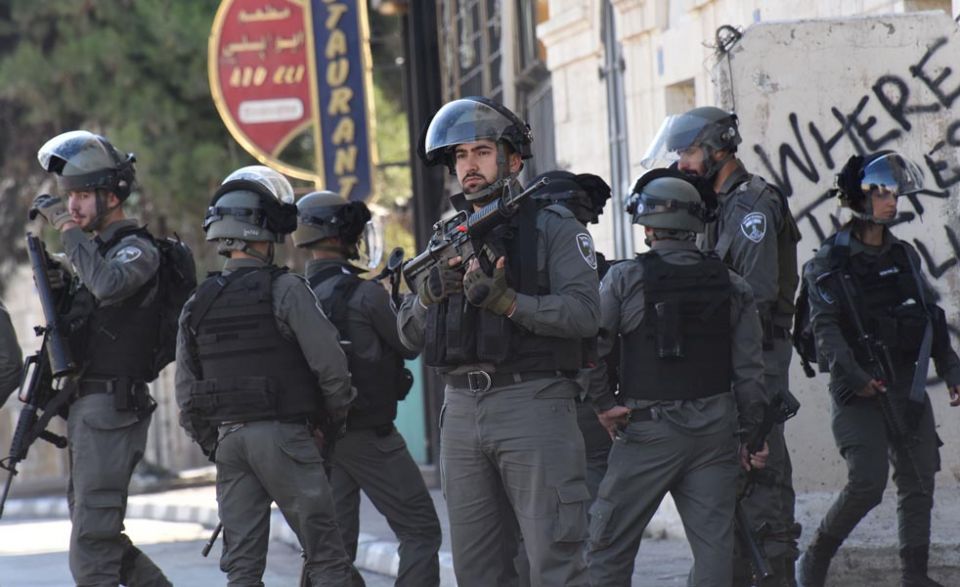 Zaha Hassan, a Middle East fellow with New America, a non-partisan think tank, who served as legal advisor during the 2010-12 Palestinian bid for U.N. membership, told NCR that Trump's proclamation "goes against decades and decades of U.S. policy and really doesn't further peace in the region at all."

She called it "shocking" that the president did not recognize the rights of Palestinians in his statement.

"It talked about Israel and the Palestinians, as if they're some people unconnected to any territory, that they aren't the indigenous people of the land that Israelis and Palestinians have been in conflict over all of these years," Hassan said.

Trump described Jerusalem as "one of the most sensitive issues" in the peace talks, and said the decision was not meant to take a position on that or other final status issues, nor "a departure from our strong commitment to facilitate a lasting peace agreement." Recognizing Jerusalem as Israel's capital, he said, was "nothing more, or less, than a recognition of reality."

Hassan questioned that explanation of the move, pointing to the realities of Israeli checkpoints surrounding Jerusalem and Israeli settlers living in disputed territory.

"There's reality and there's illegality. And so to recognize the reality of Israel's illegality and then reward it is really hard to understand, to put it lightly," she said.

Along with that recognition, she argued, the president also tipped the scales toward Israel on a critical final status issue.

"By saying that the capital of Israel is Jerusalem, without making any corollary statement about Palestinian rights to this city, completely negates Palestinian national identity and connection to Jerusalem," Hassan said.

Rebecca Vilkomerson, executive director of Jewish Voice for Peace, told NCR that Trump's proclamation "laid bare" the fact that U.S. policy on Middle East peace has not been neutral but rather favored Israel.

In its statement on the Jerusalem move, Jewish Voice for Peace, a grassroots group with 200,000 members and supporters, said it was "reckless" and represented "a clear attempt by Israel and the U.S. to consolidate Israeli annexation of land," referencing the eastern portion of Jerusalem annexed by Israel in 1967 that is viewed internationally as occupied territory.

Bernstein also acknowledged that U.S. diplomacy has long "tipped a hat in Israel's direction," which he said gives the Jewish state "the needed confidence to make hard compromises."

"It should go without saying that the U.S. must be careful to balance its support of Israel with strong backing of Palestinian rights and a two state solution," he said, adding that Trump's decision doesn't prejudge the final outcome of peace negotiations and "does nothing to foreclose on Palestinian claims for a capital in the eastern part of the city."

To mitigate possible damage to the peace process, Hassan suggested that the U.S. state its commitment to upholding U.N. Security Council resolutions on Jerusalem, specifically that Israel has no right to occupied territories and that a Palestinian capital would be located in East Jerusalem.

As for peace talks, observers have difficulty seeing how the U.S. announcement will help move the negotiations forward.

The Jesuit priest Christiansen said the current situation is one that presents an opportunity for Christians to seek creative and inventive ways to bridge divides among their fellow Holy Land occupants.

But in the aftermath of the U.S. separating itself from the rest of the international community by a Jerusalem capital of Israel, he held less hope that the country could retain a leading role in mediating peace talks — a sentiment also expressed by Palestinian President Mahmoud Abbas. The U.N. Security Council or Europe have been suggested as possible alternative peace brokers.

"This is a situation where we'll have to pray for a new peacemaker to come forward," he said.