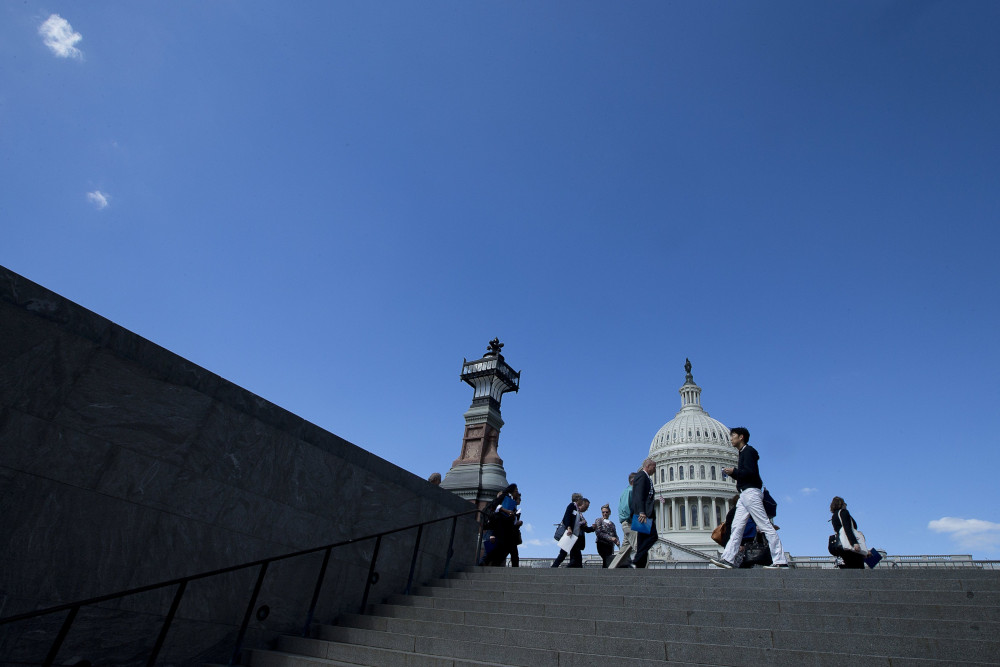 People walk near the U.S. Capitol in Washington May 3, 2017. (CNS photo/Tyler Orsburn)

In response to the multiple mass shootings in recent weeks, the chairmen of four U.S. Conference of Catholic Bishops' committees sent a letter to Congress urging lawmakers to "stop the massacres of innocent lives."

"We urge all members of Congress to reflect on the compassion all of you undoubtedly feel in light of these tragic events and be moved to action because of it," the bishops wrote in a June 3 letter.

They said finding a way to stop ongoing acts violence as demonstrated in Ulvade, Texas, and Buffalo, New York, to name just a few examples, requires a broad response that examines "mental health, the state of families, the valuation of life, the influence of entertainment and gaming industries, bullying and the availability of firearms."

And although they see a need for broad reform, they focused on guns in particular, stressing that "among the many steps toward addressing this endemic of violence is the passage of reasonable gun control measures."

These committee leaders noted that even though work needs to be done to address the root causes of violence, there were practical steps Congress could take right now by supporting legislation to expand background checks for gun sales.

They also criticized Congress for its lack of action on gun control, noting that in the 10 years since the mass shooting at Sandy Hook Elementary School in Newtown, Connecticut, "very little has been done by Congress to regulate these weapons and prevent another catastrophe."

"We urgently call on members of Congress to work together in a bipartisan fashion to make these horrific attacks less likely to happen again," they wrote.

The bishops said the USCCB has long supported measures to address gun violence and continues to do so.

Looking at specific measures, they said they support a total ban on assault weapons and limitations on civilian access to high-capacity weapons and ammunition magazines. They also cited their support for universal background checks for all gun purchases.

"We ask that Congress pass a federal law to criminalize gun trafficking," the bishops added, saying this was particularly important because the United States "not only suffers from domestic gun violence but is a major international exporter of weapons."

The church leaders also said they support proposals for a more appropriate minimum age for gun ownership and a ban on bump stocks -- additional gun parts which dramatically increase the guns' rate of firing.

They pointed out that while "strengthened gun laws could reduce mass-casualty events, not even the most effective gun laws, by themselves, will suffice to address the roots of these violent attacks in our country" and stressed the need for improved mental health care access and resources as well as "peacebuilding in our communities through restorative justice models."

"Bipartisanship is never more important than when it is required to protect life and end the culture of death. We invite you to support these measures and to be part of building up the culture of life that is so needed in our society, not just as elected officials but as mothers and fathers, grandparents, and aunts and uncles of little children or teachers whom you expect to return home safely today," they wrote.

The bishops' letter was sent to Congress the day after President Joe Biden addressed the nation from the White House June 2 pleading with Congress to pass what he described as "rational, commonsense measures" to curb gun violence. He said it was time to put an end to the "carnage" and loss of American lives.

The president called for the ban on assault weapons and high-capacity magazines to be reinstated and said the minimum purchasing age for semi-automatic weapons should be raised from 18 to 21.

He also called for a strengthening of background checks and red-flag laws aimed at keeping guns away from those with mental illness. He also urged a repeal of the immunity that shields gun manufacturers from liability.

While Biden was addressing the nation, the U.S. House Judiciary Committee passed a gun control package following heated discussion. The legislation, called Protecting Our Kids Act, includes eight bills related to gun control, expected to be on the House floor the week of June 6.

The measure would raise the age of purchasing semi-automatic rifles from 18 to 21, create new requirements for storing guns in a home with children, prevent gun trafficking, require firearms to be traceable and regulate bump stocks.

It was expected to pass in the House but not the divided Senate, where it needs 60 votes.

Republicans in Congress have criticized Democrats for rushing to pass gun legislation and have blamed recent mass shootings on mental health issues and an overall lack of family values.