US has little standing to lecture dictators 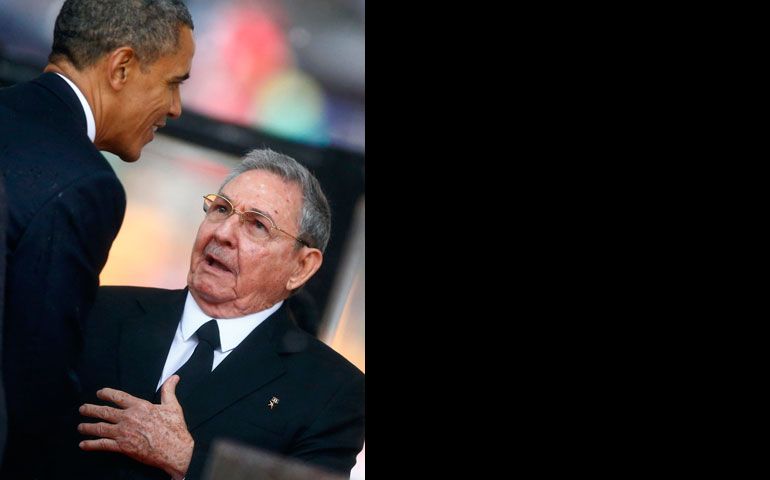 "Why should you shake hands with somebody who's keeping Americans in prison?" asked McCain. "I mean, what's the point?"

Rubio's knock: "If the president was going to shake his hand, he should have asked him about those basic freedoms Mandela was associated with that are denied in Cuba."

What kind of confrontational politics would have pleased McCain and Rubio and their right-wing base? Obama giving the finger to Castro? Jabbing him in the chest, then shouting, "You no good commie pinko dictator"?

If civility to communist dictators is a wrong move, then who deserves scorn more than Richard Nixon and Ronald Reagan? In 1972, Nixon was in Beijing pressing the flesh with Mao Zedong, practicing the first rule of conflict resolution: If you want to create the conditions for peace, don't talk to your friends, talk to your enemies. Communist China is now loaning money to capitalist America. In the 1980s, Reagan, who called the Soviet Union "the evil empire," was shaking hands with Mikhail Gorbachev in Moscow and later at the White House.

The reality is that U.S. presidents have little standing to be lecturing a Cuban president about his internal policies. The damage inflicted on the people of Cuba by the U.S. 50-year trade embargo -- the diplomacy of pettiness -- is beyond calculation. Washington's dislike of Fidel Castro all these decades has done him little harm, either personally or politically.

Obama has shown scant interest in ending the embargo. Fecklessly, he does nothing to remove Cuba from the State Department's terrorist list. Simultaneously, Obama is comfortable with his own style of oppression in Cuba: Guantánamo. In December, the prison held some 160 men, a tenancy held untried indefinitely for more than a decade. Repeated reports of flagrant physical torture and emotional abuse led Amnesty International to call Guantánamo "the gulag of our times" and a "human rights scandal."

Fidel Castro has been ruthless in jailing political prisoners, including an occasional American. But before Republican politicians like McCain fleck their opinions with disdain about Cuba, they might want to pause to consider how they can end the shame of Guantánamo and let the U.S. rise from a moral swamp to the moral high ground.

In his eulogy at the Mandela funeral, Obama, disingenuous, left little doubt that he included Raul Castro when he said: "There are too many leaders who claim solidarity with Madiba's struggle for freedom, but do not tolerate dissent from their own people." That from a United States president who is so frightened by dissent that he oversees a massive domestic surveillance operation to keep clued on possible dissenters. That from a president who continues to sanction weapons sales to governments that suppress dissent, as have all modern U.S. presidents before him, whether the clients were Arab monarchs or Latin America caudillos.

It was Mandela who called the United States and its rampant militarism "a threat to world peace."

It was Mandela who, at the time of the second American invasion of Iraq, said the U.S. "is a country that has committed unspeakable atrocities."

It was Mandela who asked, "How can they have the arrogance to dictate to us who our friends should be?" when the Clinton administration criticized him for meeting with Moammar Gadhafi in Libya or inviting Fidel Castro to South Africa.

It was Mandela enduring his 22nd of 27 years of imprisonment in 1986 when Reagan vetoed the Comprehensive Anti-Apartheid Act imposing economic sanctions on the white supremacist government of South Africa, a veto overridden by Congress.

It was Mandela who told Newsweek magazine in 2002, "The United States now feels that they are the only superpower in the world and they can do what they like."

It was Mandela who never received an apology from the American government for keeping him on Washington's terrorist list until 2008.

It was Mandela whom Obama eulogized as "the last great liberator of the 20th century" -- high praise now that he is safely gone.

Column | US has little standing to lecture dictators