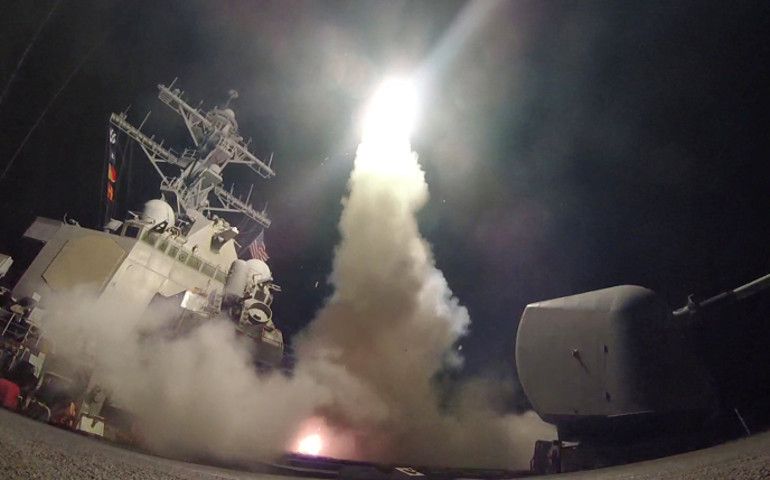 Washington — The U.S. cruise missile strike on a Syrian air base days after chemical weapons were dropped on civilians in rebel-controlled territory further endangers innocent people, observers familiar with the just-war theory said.

If anything, the observers told Catholic News Service, the unilateral U.S. response could embolden Syrian President Bashar Assad to undertake future attacks, exposing more lives to harm — including those of people fleeing the violence.

The U.S. strike early April 7 on the Shayrat airfield came three days after chemical weapons were dropped in the town of Khan Sheikhoun in Idlib province. The attack claimed more than 80 lives, including dozens of children.

President Donald Trump has cited the deaths of the children in particular in condemning the attack prior to the retaliatory strike.

The Pentagon reported that 23 of 59 missiles launched from warships in the eastern Mediterranean Sea struck the air base. Military leaders were unsure of the status of the remaining 36 missiles.

SANA, the Syrian state news agency, said 15 people died during the U.S. attack and that nine of the dead, including four children, were civilians.

Overall, the 6-year civil war has claimed as many as 470,000 lives according to various humanitarian agencies. An estimated 4.8 million people have been displaced with many fleeing the country altogether.

Such numbers should give pause to the U.S. and the world to think about the morality of future military actions and focus on responding to the needs of displaced people rather than one-time retaliatory strikes, said the expert observers.

Langan was among several people who said that applying the just-war theory in Syria's conflict is difficult because the warring factions are within one country rather than among two or more nation states, but that moral reason requires that the primary concern must be the protection of civilians.

The just-war theory encompasses seven principles: war as a last resort; war is waged by a legitimate authority; just cause in that a war must be in response to wrong suffered; probability of success; right intention to re-establish peace; proportionality so that the violence in a just war is proportional to the casualties suffered; and civilian casualties, meaning civilians are never the target in a just war.

I think civilians are at great risk, but it's not as if there are risk-free alternatives in that situation," Langan told CNS. "And the level of risk depends on the smart quality of intelligence available. It's particularly important in light of these considerations to avoid attacks that kill large numbers of civilians, particularly children."

Lawrence Wilkerson, who served as chief of staff to Colin Powell when he was secretary of state and now is a distinguished adjunct professor of government and policy at the College of William and Mary, said U.S. leaders seem to have ignored the refugees.

"That should be the very first emphasis, taking care of these people," Wilkerson said.

Wilkerson and others questioned Trump's reasoning for the April 7 missile strike — the protection of civilians — while the administration has called for prohibiting Syrian refugees from entering the U.S., when in the past they have been welcomed.

They also expressed concern beyond such focused moral questions that the U.S. strike seemed to occur with no specific strategy in place to address the complicated Syrian situation.

"If you look at the (U.S.) strike, my concern about it is on just-war grounds. But I'm also concerned that it seems to be a one-off, something that doesn't seem to be related to working toward just peace," said Daniel Philpott, professor of political science at the University of Notre Dame.

Philpott called for the international community to step up in response.

"In a strict legal sense and a larger moral sense, there needs to be a much more concerted international effort to not just have pinprick strikes, but toward bringing the whole thing to a halt," he told CNS.

Notre Dame colleague David Cortright, director of policy studies at the Kroc Institute for International Peace Studies, said the U.S. action "does not fit an ethical response," because not all the facts were known at the time.

"When we respond so quickly in a military fashion it looks like retaliation rather than an attempt to find a solution," Cortright explained. "Our ethical foundation calls us to find solutions to conflict, not to retaliate."

While the use of chemical weapons is a "gross violation of human rights," Msgr. Stuart Swetland, president of Donnelly College in Kansas City, Kansas, who once served aboard a nuclear weapon-armed submarine while with the U.S. Navy, said the situation in Syria requires that "we want to think these things through."

Swetland expressed concern that there "is not a serious discussion on the U.S. use of military power" in Syria despite the onslaught of U.S. bombs in the country. An estimated 25,000 bombs were dropped by American forces during the last year of President Barack Obama's administration without congressional authorization.

"Right now, we're bombing both sides in the civil war. What is your hope and what is your goal?" he asked.

The observers suggested that a strong moral and ethical priority should be for the world to pursue negotiations among all of Syria's factions to end the civil war — as Pope Francis has repeatedly stated.

How that comes about is difficult to determine. But the answer, the observers told CNS, partially lies in the willingness of Russia, Assad's main backer, and the U.S. to step back from a major confrontation between the world's largest holders of nuclear weapons and do what's best in the interests of the world.

The 'big revolution' according to Cardinal Rodriguez

Pope's quotes: Allow Him to lift you up

Your thoughts on nomination of Amy Coney Barrett