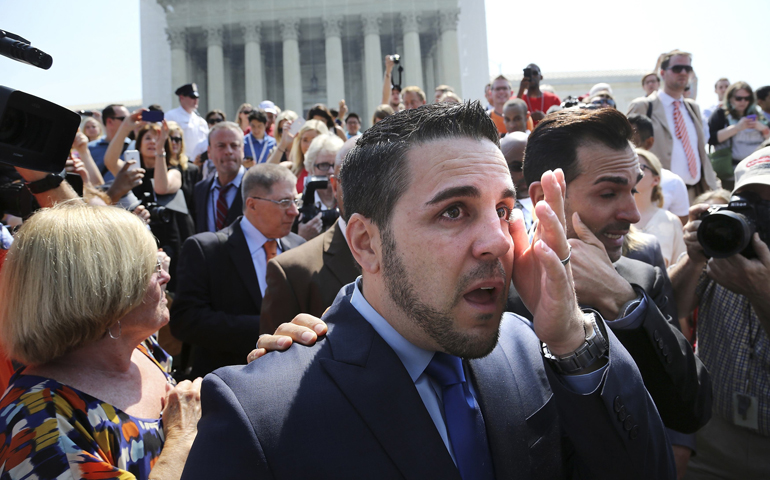 Jeff Zarrillo, center, and Paul Katami, right, plaintiffs in the case against California's same-sex ban known as Proposition 8, wipe away tears and greet supporters as they depart the Supreme Court on Wednesday in Washington. (CNS/Reuters/Jonathan Ernst)

While the decisions represented for same-sex marriage supporters a reason for "prayers of thanksgiving," U.S. Catholic bishops described it as "a tragic day for marriage and our nation."

In the opinion on Hollingsworth v. Perry -- the Proposition 8 case -- Chief Justice John Roberts wrote the court "has no authority to decide this case on the merits," nor did California's Ninth Circuit Court of Appeals because the parties who brought it forward -- supporters of the proposition instead of state government officials -- lacked standing to do so.

"We have never before upheld the standing of a private party to defend the constitutionality of a state statute when state officials have chosen not to. We decline to do so for the first time here," Roberts wrote.

The court's ruling vacates the Ninth Court's ruling, with instructions for the lower court to dismiss the appeal for lack of jurisdiction.

Earlier, the court also ruled that Section 3 of the Defense of Marriage Act, which defined marriage as between a man and a woman for purposes of federal laws, was unconstitutional.

According to SCOTUSblog, the DOMA decision came 5-4, with Kennedy writing the opinion and Ginsburg, Breyer, Sotomayor and Kagan all joining. Roberts, Scalia and Alito all filed dissenting opinions; Thomas joined Scalia's opinion and parts of Alito's.

"DOMA singles out a class of persons deemed by a State entitled to recognition and protection to enhance their own liberty," the court ruled. [Read the full ruling.]

In Section 3 of the Defense of Marriage Act, signed by President Bill Clinton in 1996, marriage for federal law purposes is defined as "only a legal union between one man and one woman as husband and wife."

The court's ruling does not rule on Section 2 of DOMA, which grants states the power to refuse to allow same-sex marriage in its jurisdiction.

Lines began forming Tuesday evening outside the Supreme Court building for a chance to enter the justices' chambers to hear the ruling in person. Thousands of others gathered online at the SCOTUSblog, with 300,000 following a live chat at one point as the court issued rulings on the two same-sex marriage cases.

The DOMA case before the court, Windsor v. United States, was brought by an 83-year-old widow, Edith Windsor, whose partner, Thea Spyer, died in 2009 after the two married in Canada two years earlier. Spyer left her estate to Windsor, who was ruled ineligible for exemption from the federal estate tax and faced a $363,000 bill.

In June 2012, a federal court in New York, where Windsor and Spyer resided, ruled DOMA unconstitutional. In October, a federal appeals court upheld that ruling, and two months later, the Supreme Court agreed to hear Windsor's challenge to DOMA's constitutionality.

Proposition 8 was a 2008 referendum passed by California voters to overturn the state Supreme Court's ruling earlier that year that limiting the marriage definition to opposite-sex couples violated the equal protection clause.

Reaction to the decisions came along expected divisional lines between same-sex marriage supporters and defenders of traditional marriage.

"Today is a cornerstone for justice and equality -- when our nation once again moved closer to recognizing and celebrating all LGBT Americans for their contributions to our great country," Wilson Cruz, GLAAD spokesman, said in a press release.

Others saw the day in a different light, with the U.S. Conference of Catholic Bishops calling it "a tragic day for marriage and our nation."

In a joint statement, bishops' conference president New York Cardinal Timothy Dolan and San Francisco Archbishop Salvatore Cordileone, chair of the subcommittee for the promotion and defense of marriage, bluntly expressed their disagreement: "The Court got it wrong."

"The federal government ought to respect the truth that marriage is the union of one man and one woman, even where states fail to do so. The preservation of liberty and justice requires that all laws, federal and state, respect the truth, including the truth about marriage," the bishops said.

The bishops had made upholding traditional marriage a focal point of their second Fortnight for Freedom, which began Friday and continues through July 4. In the last eight months, six states have adopted legislation permitting same-sex marriages, bringing the total numbers of states that allow it to 12. Same-sex marriage is also permitted in Washington, D.C.

"The common good of all, especially our children, depends upon a society that strives to uphold the truth of marriage. Now is the time to redouble our efforts in witness to this truth. These [Supreme Court] decisions are part of a public debate of great consequence. The future of marriage and the well-being of our society hang in the balance," they said.

Equally Blessed, a coalition of four Catholic gay ministry organizations, saw the day as reason to "celebrate and offer ​prayers of thanksgiving."

"And tomorrow we invite our fellow Catholics to join us in working to bring marriage equality to the states in which it has not yet been written into law," the coalition said in a press release, also noting that Kennedy, who wrote the DOMA opinion, is Catholic, as is Sotomayor, who supported the decision.

In a separate statement, New Ways Ministry executive director Francis DeBernardo quoted the prophet Amos, describing the decisions as feeling "like justice rolling down the river."

"Our Catholic social justice tradition motivates us to work for strong families and expansive social protections, and these can only be achieved when all families are treated fairly and equally under the law," he said.

On the other side, the National Organization for Marriage "expressed dismay and outrage" with both of the court's decisions, labeling them "illegitimate" and a "miscarriage of justice." The group found some solace in the court's refusal to identify a constitutional right for same-sex marriage.

"There is a stench coming from this case that has now stained the Supreme Court. They've allowed corrupt politicians and judges to betray the voters ... We and millions of other Americans will refuse to accept this rogue decision rewarding corruption," organization president Brian Brown said in a statement.

Despite the Wednesday rulings, Fr. Shenan Boquet, president of Human Life International, said no court or vote could alter the definition of marriage, "since marriage is an institution that predates any government."

"Marriage still is, and has always been, a covenant by which one man and one woman establish a partnership for life that is by its nature ordered toward the good of the spouses and the procreation and education of children," he said in a statement.