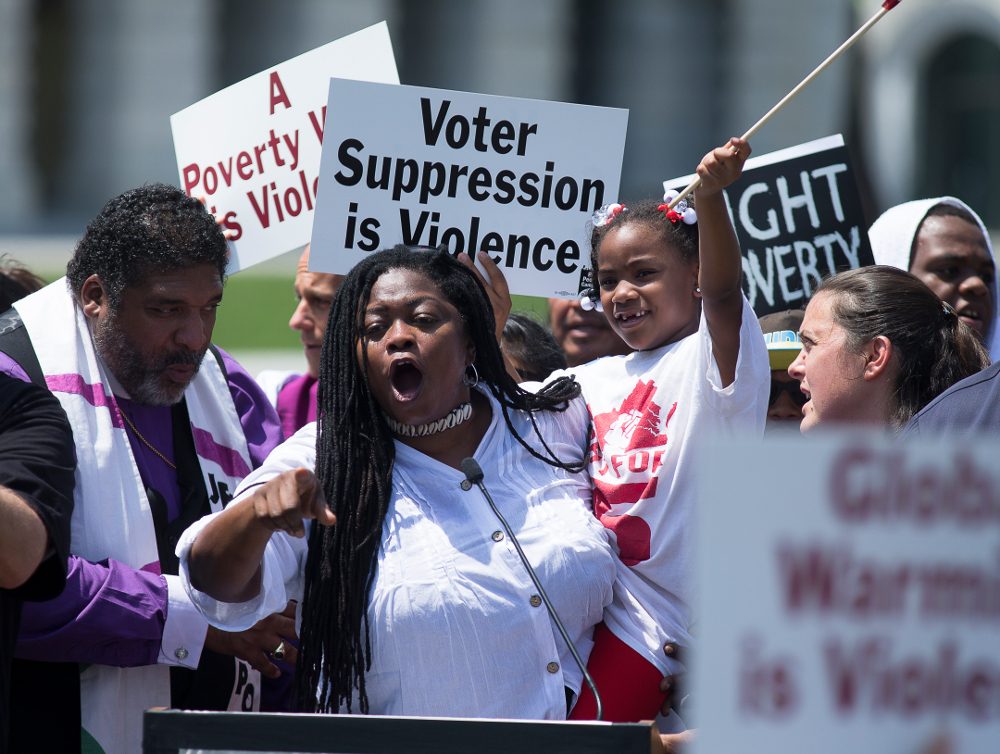 Protesters are seen near the Capitol in Washington May 21 to demand elected officials take immediate steps to confront systemic racism. (CNS/Tyler Orsburn)

Religious leaders, low-income workers and supporters sang the refrain of an end to voter suppression and the reestablishment of full voting rights for all U.S. citizens during demonstrations as part of the second week of the revived Poor People's Campaign.

Inside the Rotunda of the U.S. Capitol building in Washington, D.C., a contingent of more than 100 people Monday spelled out their demands in word and in song.

"In this place, we pray and we demand the immediate and full restoration and expansion of Voting Rights Act, preclearance, ending surgical racism. We come to pray and demand early voting, same-day registration, automatic registration at 18 and an end to racial gerrymandering," said the Rev. William Barber, co-founder of the Poor People's Campaign, A National Call for Moral Revival.

"Our democracy is in trouble," the Protestant pastor from North Carolina observed.

"It is time we help transform society through prayerful action," Carolan told NCR. 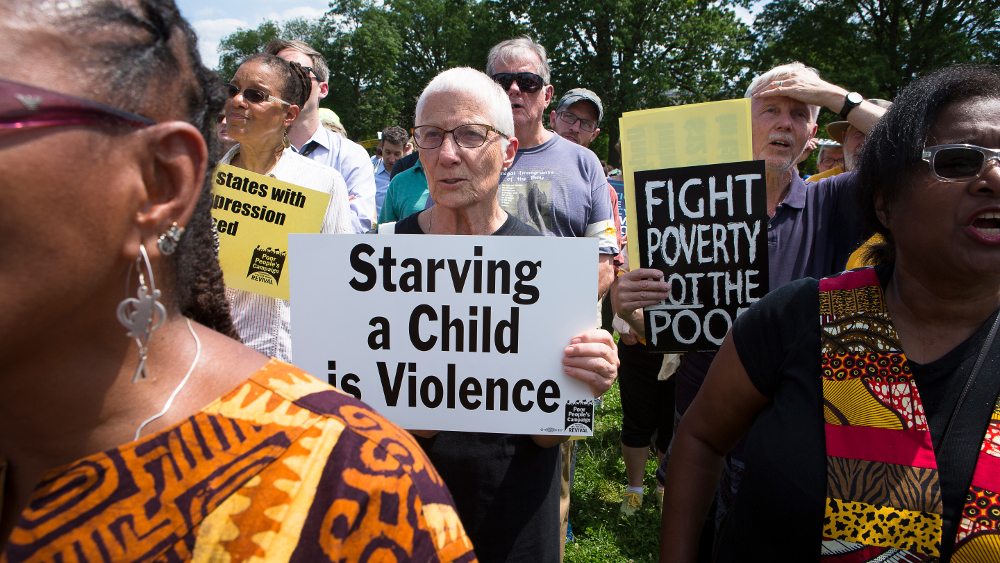 Also among the arrested May 21 was the Rev. Jesse Jackson, the mayor of the Resurrection City tent community established in May 1968 on the National Mall during the original Poor People's Campaign, the final effort of the Rev. Martin Luther King before he was assassinated on April 4 that year.

"We honor their lives, their lives shared when we pay the price, whatever the price may be, to keep marching," Jackson said in a prayer, referencing King and fellow social activist Rabbi Abraham Heschel, along with James Chaney, Andrew Goodman and Michael Schwerner — the three men murdered by the Ku Klux Klan in Mississippi in June 1964 while working to register black voters.

Speakers in the Rotunda and at a pre-rally cited findings from a report by the Institute for Policy Studies examining the state of America 50 years after the original Poor People's Campaign in making the case that there are fewer voting rights today than in 1968.

They pointed specifically to the 2013 U.S. Supreme Court decision that invalidated a key provision of the Voting Rights Act of 1965, including Section 4 that required a "preclearance" process in states with a history of discrimination where federal approval was required for changes to voting laws or procedures. The campaign leaders said 23 states since 2010 have passed some type of voter suppression law, while 17 have voter suppression laws that target Native Americans and indigenous people.

"We condemn ongoing, proven acts of racist voter suppression, of racial voting district gerrymandering that undermine our democratic process and hurt the poor and most vulnerable of all races. Voter suppression has a consistent, negative impact on our nation's poorest residents," said the Rev. Liz Theoharis, co-founder of the Poor People's Campaign.

"Right now, everybody is guessing what Russia did [in the 2016 election], and some people are making pretty good guesses, but we know what voter suppression has done," Barber added, criticizing extensive media coverage of foreign influence into the presidential election while giving less attention to the impact of state voting laws.

The suppression of voting rights, the organizers said, has a direct link to policies passed that have blocked living wages and health care for the poor. They highlighted the 13 states with voter suppression laws that have not expanded Medicaid under the Affordable Care Act, as well as the 25 states with laws barring cities and counties from raising their minimum wage or establishing a living wage.

"Our concern, as Dr. King said, legitimate discontent, is rooted in empirical and anecdotal evidence," Barber said at the rally outside the Capitol. "We are not just out here in the sun for fun. We are here because there are serious immoral attacks on our democracy, but we can turn them around when the people come together." 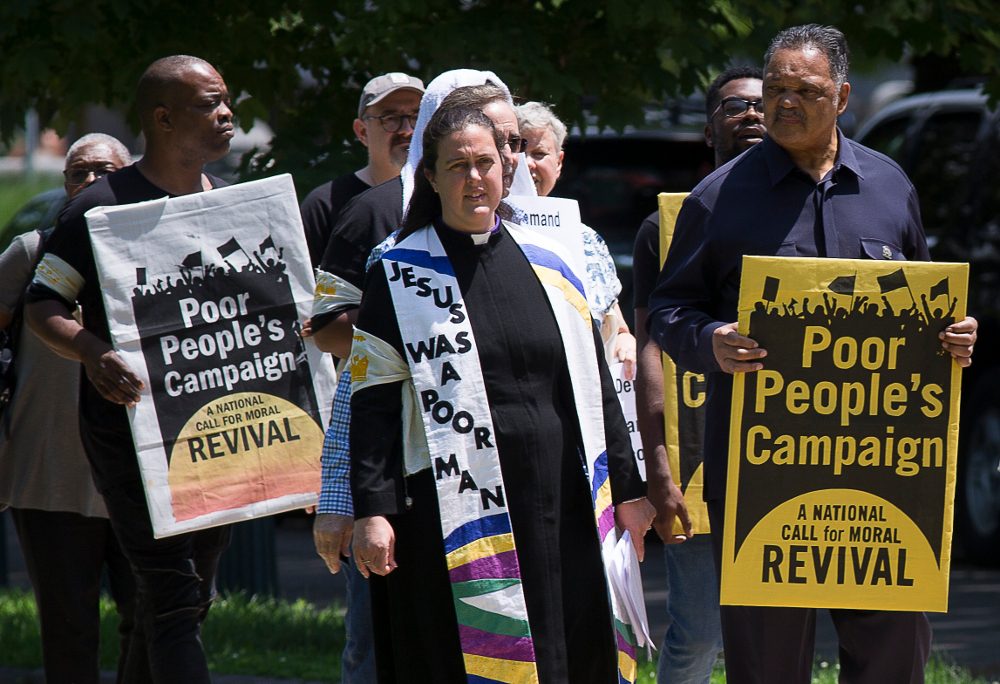 The Rev. Liz Theoharis, co-chair of the Poor People's Campaign, walks with the Rev. Jesse Jackson toward the Capitol in Washington May 21. (CNS/Tyler Orsburn)

"Poverty, we got to understand, is not a choice," said Nic Smith, from central Appalachia and part of the Fight for $15 movement. "We're not poor because we're lazy. We're not poor because of some moral failure in our work ethic. Someone working two and three jobs, sometimes four jobs, trying to take care of their children because they can't get full-time hours at work, or people that work full-time and are still poor, I wouldn't call them lazy."

Instead, he cited "a corrupt electoral system … a system based off greed and not addressing need." He echoed Barber in calling for deracializing poverty, and rejecting the idea that the plight of white working class is because of black and brown people. Describing himself as a poor, white hillbilly, Smith said he's joining poor people of all colors, creeds and sexualities in the Poor People's Campaign because "our backs are against the wall and we have no choice but to push."

Kenia Alcocer, an undocumented immigrant from Los Angeles, said the campaign "has revived my faith and my hope."

"I am here because I am tired of just surviving. I'm here because I deserve to live without fear. I stand here today in solidarity with all the immigrants in the world," she said.

With its kickoff May 13, the Poor People's Campaign has planned six weeks of nonviolent civil disobedience, largely focused on Mondays of each week, around the issues of systemic racism, poverty, the war economy, ecological devastation and a distorted national morality. Demonstrations have taken place in Washington, as well as 30 state capitals, including actions on May 21 in Nashville, Tennessee, Topeka, Kansas, and Tallahassee, Florida.

At one point during the Washington rally, Barber addressed critics who have said the campaign is too broad with its issues — the second week, for instance, focused on linking systemic racism and poverty through examination of voting rights, immigration, xenophobia, islamophobia and the mistreatment of indigenous communities — and related demands.

"Somebody said we should have a smaller goal. Why should we have a smaller goal when our democracy is under attack?" he said, adding he wouldn't want such people negotiating the end to slavery, in that they would likely have decided "a long weekend would be enough. Just three days off, the other days we can be slaves."

"But how many of you are not willing to accept anything less than what God demands, our constitution demands, and our humanity demands?" Barber asked the crowd. 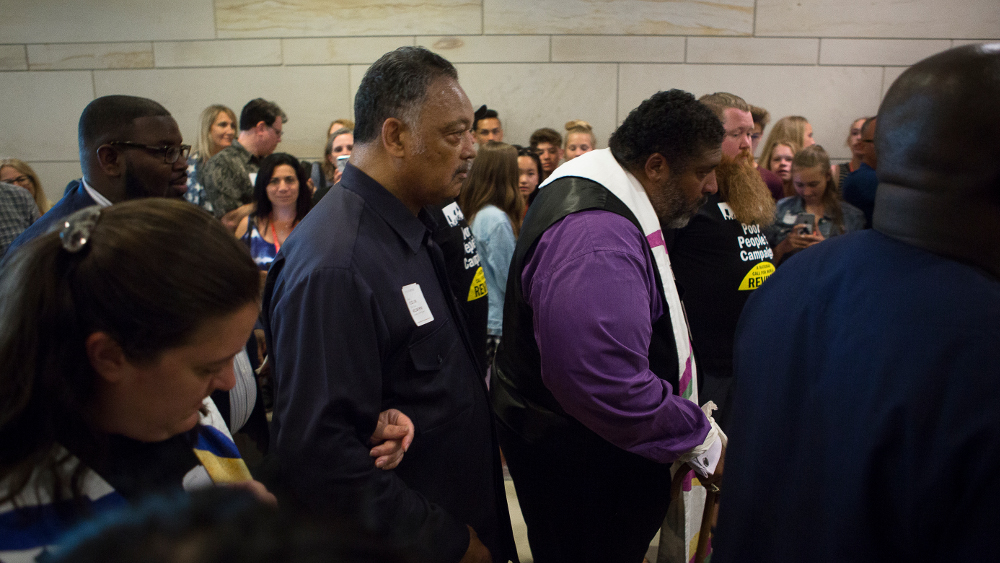 The Rev. Jesse Jackson is pictured in Washington May 21 with the Rev. William Barber, a Disciples of Christ pastor who has led "Moral Monday" protests for social justice in the North Carolina State Capitol, and the Rev. Liz Theoharis, co-director of the Kairos Center for Religion, Rights and Social Justice, the co-chairs of the Poor People's Campaign. (CNS/Tyler Orsburn)

"The Poor People's Campaign is an effort to express the complexity and the interconnectedness of the issues that are extremely harmful to people in the country and around the world," Dennis of Pax Christi International told Catholic News Service.

Wright of the Columban Center, the U.S. advocacy office for the Missionary Society of St. Columban, added that the intersectionality of the campaign's issues highlighted drew a number of Catholic organizations to participate in the movement.

"In a way, it's a very Catholic agenda of really connecting people, issues in a holistic way," he told NCR. "And for the Poor People's Campaign, the heart of it is the Gospel and really a moral revival."

By bringing so many diverse people together, Wright said the campaign has the potential to change the narrative in America around a moral, rather than political, agenda at a crucial time when public discourse and policies from the Trump administration are impacting poor and vulnerable communities in real ways.

"We have to be careful that what should never be acceptable becomes the new normal," he said.

Carolan of Franciscan Action Network summarized the importance of the revived Poor People's Campaign as "to raise awareness that the dream of Martin Luther King didn't die, and it wasn't completed."

The Poor People's Campaign sees its 40 days of actions, concluding with a mass mobilization in the nation's capital on June 23, as just the beginning of a multi-year effort to unite millions of Americans behind a push for changing the moral conversation and agenda in America to re-center it on addressing poverty and "a Moral Revival to make this country great for so many for whom it has not yet been."