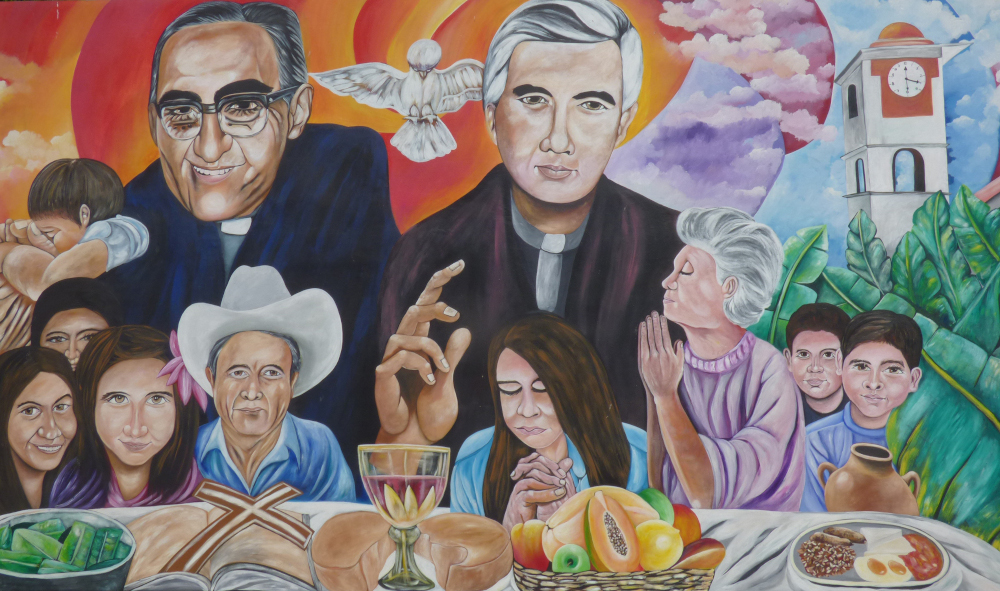 A mural in El Paisnal, El Salvador, seen in this Jan. 29 photo, features Blessed Oscar Romero and town native Fr. Rutilio Grande, surrounded by rural men, women and children, the community the Jesuit Father Grande served from 1972 until his March 12, 1977, assassination. Fr. Grande spoke of his dream of a communal table where everyone, including the poor, had a place to eat and a right to have a say in matters that affected them. (CNS/Rhina Guidos)

The Vatican announced Feb. 22 that Pope Francis has recognized the martyrdom of a fellow Jesuit, Salvadoran Fr. Rutilio Grande, and two companions who were murdered en route to a novena in 1977 in El Salvador.

Papal recognition of their martyrdom clears the way for their beatification, although the Vatican did not announce a date for the ceremony.

"The announcement of the beatification of Father Rutilio Grande has been expected for many years," said Mercy Sister Ana Maria Pineda, a relative of the slain priest, in an email to Catholic News Service. "Today the news is received with jubilee and joy. That a man of such humble origins be recognized for his surrender to God, his love for the poor, and his efforts to achieve justice, is an example."

Fr. Grande died March 12, 1977, near his hometown of El Paisnal in rural El Salvador after being shot a dozen times or more along with elderly parishioner Manuel Solorzano and teenager Nelson Rutilio Lemus, who were accompanying him to a novena for the feast of St. Joseph. Their bodies were found lifeless in an overturned Jeep the priest was driving.

Though born in the Salvadoran countryside, Fr. Grande was educated as a member of the Society of Jesus, mostly in Spain and Belgium and other parts of Latin America, but later returned as to work among his native country's poor and rural masses. The mission teams he organized taught peasants to read using the Bible, but also helped rural workers to organize so they could speak against a rich and powerful minority that paid them meager salaries and confront the social maladies that befell them because they were poor.

With a team of Jesuit missionaries and lay pastoral agents, Fr. Grande, who was the pastor of a church in the neighboring town of Aguilares, evangelized a wide rural area in El Salvador from 1972 until his assassination by death squads. As was the case with the assassination of St. Oscar Romero and tens of thousands of other Salvadorans, no one was ever charged with his death or that of his parishioners.

"His death in the company of Manuel and the young Nelson Rutilio demonstrates his solidarity with the most needy of his beloved country," said Pineda, a theologian and professor at Santa Clara University in California, who wrote the book "Romero and Grande: Companions on the Journey."

The book explores the life of Fr. Grande and his close friend, the archbishop of San Salvador, who would later become St. Romero, canonized in 2018. St. Romero would die a similar death three years later, martyred as he celebrated Mass. Some say that when Fr. Grande died, St. Romero took up the mantle in speaking for the poor, and others, including Pope Francis, believe that the murder of Fr. Grande led to a moment of conversion for the conservative archbishop, who later became popularly known as the voice of the poor. 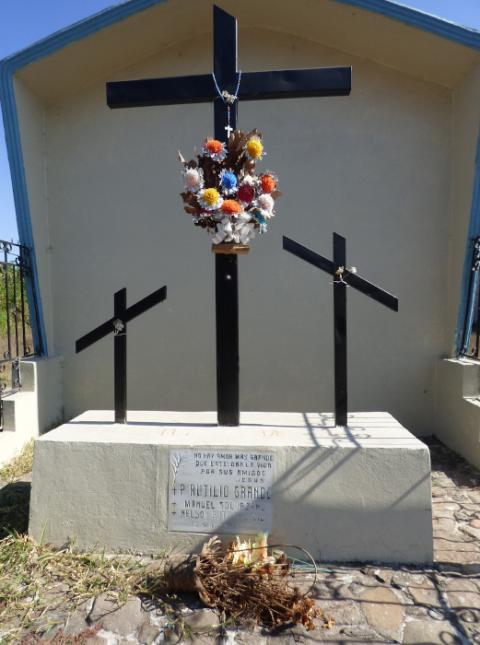 A dry bouquet of flowers sits at the foot of the Monument of the Three Crosses in El Paisnal, El Salvador, marking the spot where Jesuit Father Rutilio Grande and two parishioners were ambushed and killed by gunfire March 12, 1977. (CNS/Rhina Guidos)

Others believe St. Romero already was on a path of conversion because he had seen oppression as an auxiliary bishop in a different rural area where he served.

The official recognition of martyrdom means Fr. Grande and his companions will be beatified without a miracle being attributed to them, though Francis has, in the past, been quoted as saying that Fr. Grande's first miracle was St. Romero.

Beatification is a step before sainthood; in order for Fr. Grande and his companions to be canonized, a miracle would have to be attributed to their intercession.

"For me, the beatification of Rutilio means that the persecuted Latin American and Salvadoran church is being recognized," Salvadoran Bishop Oswaldo Escobar Aguilar of Chalatenango, El Salvador, told CNS in an audio interview via WhatsApp. "His commitment to Medellin, his commitment to the poor, especially the peasants who were being badly mistreated in the Aguilares region, where he worked, led him to become a Jesus in that land."

A 1968 conference in Medellin, Colombia, adapted the teachings of the Second Vatican Council toward the needs of the Latin American church, emphasizing pastoral care for the poor majorities of the region. Fr. Grande, along with many others, followed that direction with his work among the peasants and that sometimes led him to publicly speak out against their oppression.

"The beatification is a great joy for everyone, for peasants, for the oppressed, for those who experienced violence," said Escobar, who serves in a largely rural area, one that also saw the killing of many Catholic peasants and clergy. "As I like to say, when they canonized Romero, Romero did not go to heaven alone. Behind Romero, many martyrs followed: all the murdered and persecuted (Salvadorans). It's the same with Rutilio. He is being beatified with two peasants, two laypeople, a symbol of many who were martyred."

Despite many falsehoods spread about the Jesuit priest, including that he was a subversive and took up arms, the truth survived, and he is being recognized for his commitment as a pastor to his people, the bishop said.

For others, the beatification is more personal, as well as spiritual. Ana Grande, the Jesuit's niece and an executive at a nonprofit in California, said she was overcome with joy at the news and hoped that through the intercession of soon-to-be Blessed Grande and St. Romero, El Salvador, which still suffers from great violence, corruption, poverty and other social ailments, would heal and the people's hope and faith would be renewed.

"For years we have prayed that the beatification of our uncle, Father Grande, come at a time to encourage our Salvadoran community, to keep lifting their voices," she said to CNS via Twitter. "I can only imagine the feast Romero and Rutilio will have as they join the communion of saints."