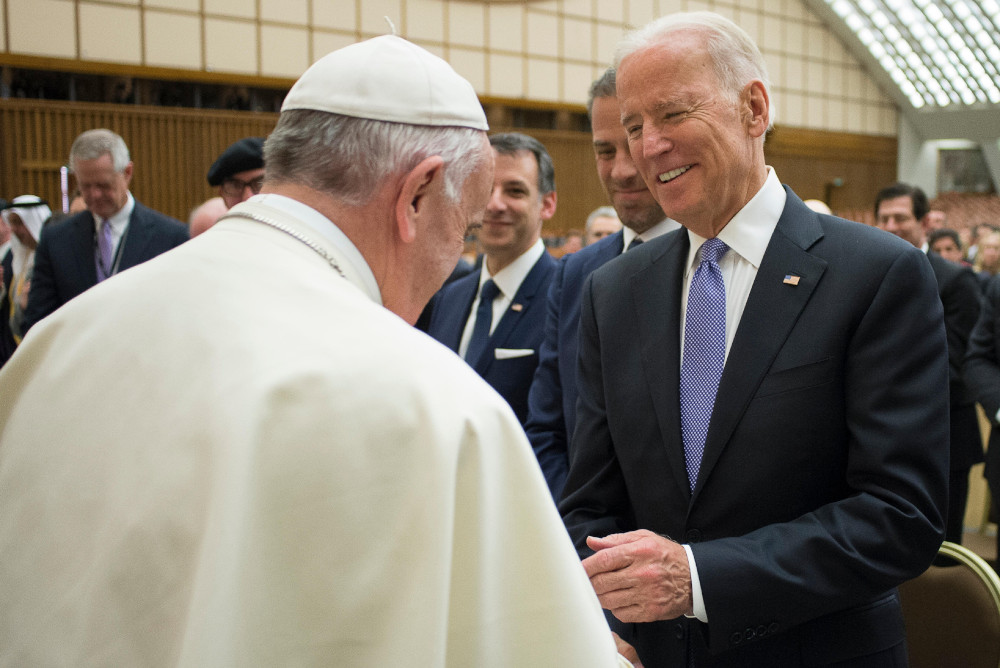 Pope Francis greets U.S. Vice President Joe Biden after both spoke at a conference on adult stem-cell research at the Vatican in this April 29, 2016, file photo. (CNS/L'Osservatore Romano)

Pope Francis and Joe Biden spoke by phone on Nov. 12 and the pontiff congratulated the president-elect, who in January will become only the second Catholic president in United States history.

According to an official read-out from the transition team working with Biden and Vice President-elect Kamala Harris, Biden received Francis' blessings and the two expressed a commitment to work together on a series of overlapping signature issues, including immigration and environmental protection.

"The President-elect expressed his desire to work together on the basis of a shared belief in the dignity and equality of all humankind on issues such as caring for the marginalized and the poor, addressing the crisis of climate change, and welcoming and integrating immigrants and refugees into our communities," said the statement.

Francis' phone conversation to Biden comes at a time when President Donald Trump has refused to concede the election, yet leaders from around the world have reached out to Biden to offer congratulations.

The president-elect, according to the read-out, "noted his appreciation for His Holiness' leadership in promoting peace, reconciliation, and the common bonds of humanity around the world."

Biden has previously met in person with Francis on several occasions. In 2013, he led the U.S. delegation to the inauguration of Francis' pontificate. In 2015, he welcomed Francis for his first-ever visit to the United States and, a year later, Biden spoke at a Vatican conference on healthcare.

During the final week of his presidential campaign, Biden cited Francis' newly released encyclical Fratelli Tutti, one of many references to his Catholic faith while on the campaign trail.

Francis, said Biden of the encyclical, asks the questions, "that anyone who seeks to lead this nation should be able to answer."