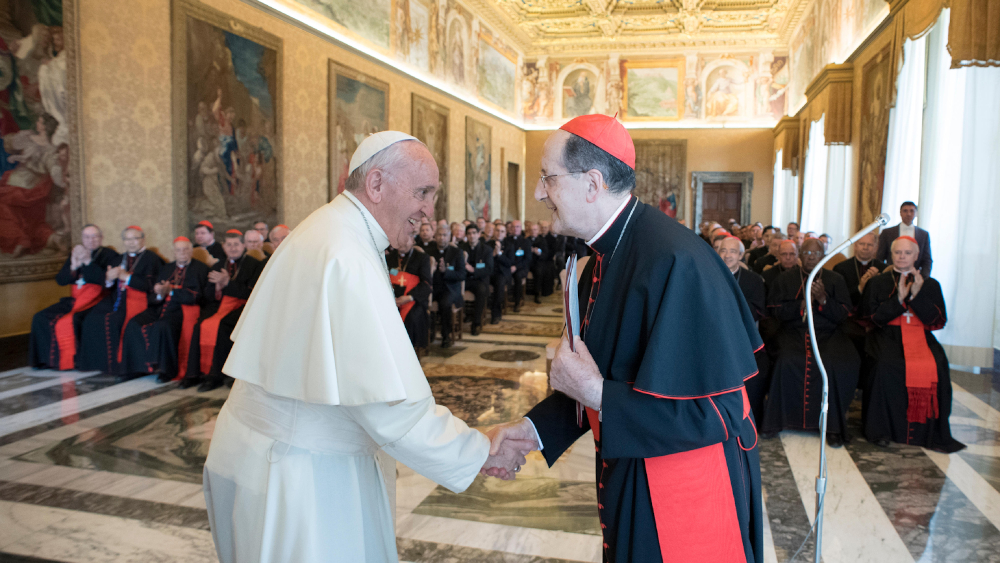 Their promotions, announced by the Vatican May 1, bring to 14 the number of cardinals holding the mostly ceremonial position.

It also brings to seven the number of cardinal bishops under the age of 80 and, therefore, eligible to enter a conclave to elect a new pope. Stella is 78; Tagle is 62.

The most important task of the cardinal bishops is to elect the dean of the College of Cardinals from among their membership.

In December, after accepting the resignation of 92-year-old Cardinal Angelo Sodano as dean, Francis changed the norms governing the office so that the dean would be elected to a five-year term renewable only once.

In January, the cardinal bishops elected the subdean, 86-year-old Italian Cardinal Giovanni Battista Re, to succeed Sodano and Argentine Cardinal Leonardo Sandri, the 76-year-old prefect of the Congregation for Eastern Churches, as the new subdean.

The College of Cardinals has three ranks:

— Cardinal priests, most of whom are diocesan bishops, although some senior curial officials also hold the rank.

— Cardinal deacons, most of whom are curial officials. They can move up to the rank of cardinal priest after 10 years.

Traditionally, the Latin-rite cardinal bishops hold the episcopal title to "suburbicarian sees," which are dioceses on the outskirts of Rome. Their role there is purely ceremonial, because the dioceses have their own bishops.

Cardinals who are patriarchs of Eastern Catholic Churches automatically are cardinal bishops, but their patriarchal see is their title.

Francis named Stella the titular bishop of Porto-Santa Rufina. Because there were no other suburbicarian sees vacant, the pope had to issue a rescript setting aside the requirements of canon law to name Tagle to the rank of cardinal bishop.

In 2018, Francis, citing the size of the College of Cardinals and the number of cardinal bishops who were over 80 and therefore could not enter a conclave, issued a similar rescript to add four cardinals to the top rank: Cardinal Pietro Parolin, 65, Vatican secretary of state; Sandri, 76; Canadian Cardinal Marc Ouellet, 75, prefect of the Congregation for Bishops; and Italian Cardinal Fernando Filoni, 74, who was prefect of the Congregation for the Evangelization of Peoples at the time. He is now grand master of the Equestrian Order of the Holy Sepulchre of Jerusalem.

Also May 1, Francis appointed Brazilian Archbishop Ilson de Jesus Montanari, secretary of the Congregation for Bishops, to be vice camerlengo or chamberlain of the Holy Roman Church. He will assist U.S. Cardinal Kevin Farrell, who was named chamberlain in February 2019.

While the pope is alive, the job is basically just a title. But when a pope dies or resigns, the chamberlain is charged with sealing the papal apartments, chairing consultations about the papal funeral, making the practical preparations for the conclave to elect the next pope, and chairing a committee of cardinals taking care of the ordinary affairs of the church until a new pope is elected.