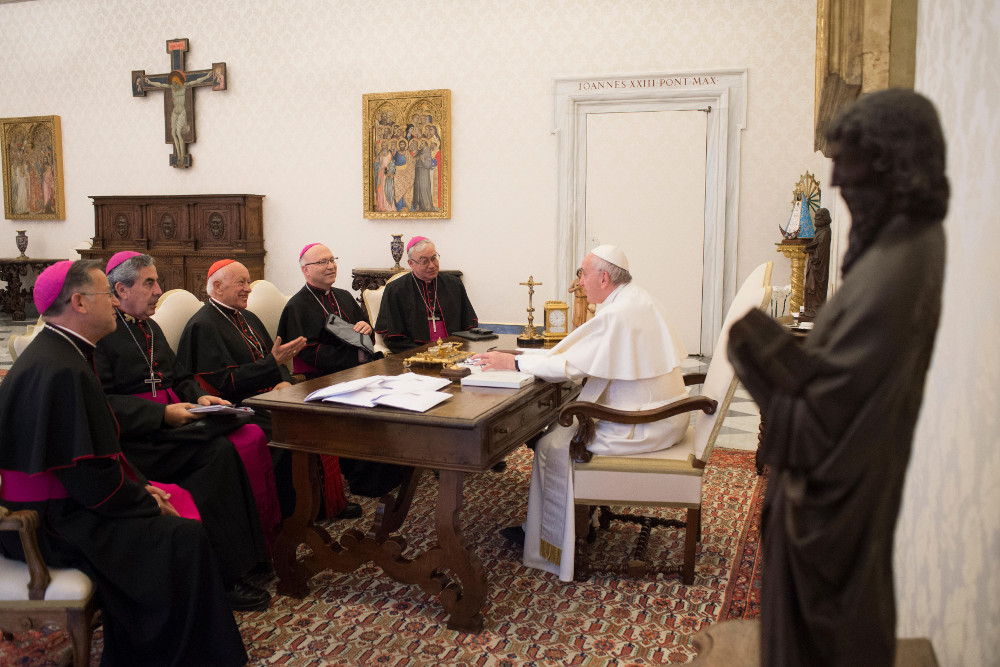 Pope Francis spent nearly three hours with bishops from Chile discussing the sexual abuse crisis that has rocked the church in the country, a Chilean bishop said.

Briefing journalists on the bishops' meeting with the pope Jan. 13, Bishop Luis Fernando Ramos Perez, apostolic administrator of Rancagua and secretary-general of the bishops' conference, said they met for one hour with the pope at Vatican's Apostolic Palace and were invited to have lunch for nearly two hours with him to discuss "the situation of the church in Chile."

According to a statement released by the Chilean bishops' conference, the purpose of the meeting was to share with the pope "the evolution of the situation of the church in Chile from his visit to the present day, as well as the perspectives for the future."

Although the sexual abuse of children and vulnerable people by members of the clergy has been a crisis that has engulfed the entire church, bishops in Chile continue to face an uphill battle back at home to regain the trust they have lost.

The crisis made headlines during the pope's visit to Chile in 2018 after he pledged his support to retired Bishop Juan Barros of Osorno, who was accused by survivors of witnessing their abuse by his mentor, Fr. Fernando Karadima.

Francis later apologized to the victims and admitted that his choice of words wounded many.

In May, almost every bishop in Chile offered his resignation to Francis after a three-day meeting at the Vatican to discuss the clerical sexual abuse scandal, detailed in a 2,300-page report compiled by Archbishop Charles Scicluna of Malta and his aide, Fr. Jordi Bertomeu.

By late June, the pope had accepted five of the resignations. He also expelled from the priesthood Karadima, who was known for his influence in Santiago and who gained notoriety for sexually abusing young men in his parish, as well as two Chilean bishops.

However, Ramos told journalists that the subject of the resignations of the country's bishops was not discussed during the meeting.

"For the pope, all the bishops are active," Ramos said. "As you are well aware, resignations given to the church are in effect for three months. He considers us all active and fulfilling our tasks. And if there was any case that needed to be addressed, it would be addressed directly to the (bishop) involved."

According to the canon 189 of the Code of Canon Law, "a resignation which requires acceptance lacks all force if it is not accepted within three months."

Ramos also told journalists that the pope did not announce a successor to Ezzati, who has been heavily criticized for his handling of sexual abuse cases in his diocese.

"As you know, (Cardinal Ezzati) is 77 years old and, at 75 years of age, all bishops must hand in their resignation," Ramos said. "The pope will decide when he will name a successor."

Ezzati, who was subpoenaed Oct. 3 by Chilean prosecutors investigating possible cover-ups of abuse cases by senior members of the clergy, said he would cooperate with authorities in their investigation.

The subpoena is believed to be related to the case of Fr. Oscar Munoz Toledo, the former chancellor of the Archdiocese of Santiago, who was arrested July 12 following allegations that he abused seven minors in Santiago and Rancagua since 2002.

However, Ezzati invoked his right to self-incrimination and chose not to testify, provoking outrage among survivors of clergy sexual abuse in the country.

Nevertheless, Ramos renewed the commitment of the country's bishops to fight sexual abuse by members of the clergy and "to make a clear gesture of continuing along this path."

He also expressed his hope that Francis' Feb. 21-24 meeting with the presidents of the world's bishops' conferences would be a chance for the whole church to work together.

"We don't consider that this issue has been overcome," Ramos said. "We have the meeting in February that we believe will be very important for the universal church and, naturally, the Chilean church. It will be an opportunity for all of us to align against this scourge with dedication and clarity."