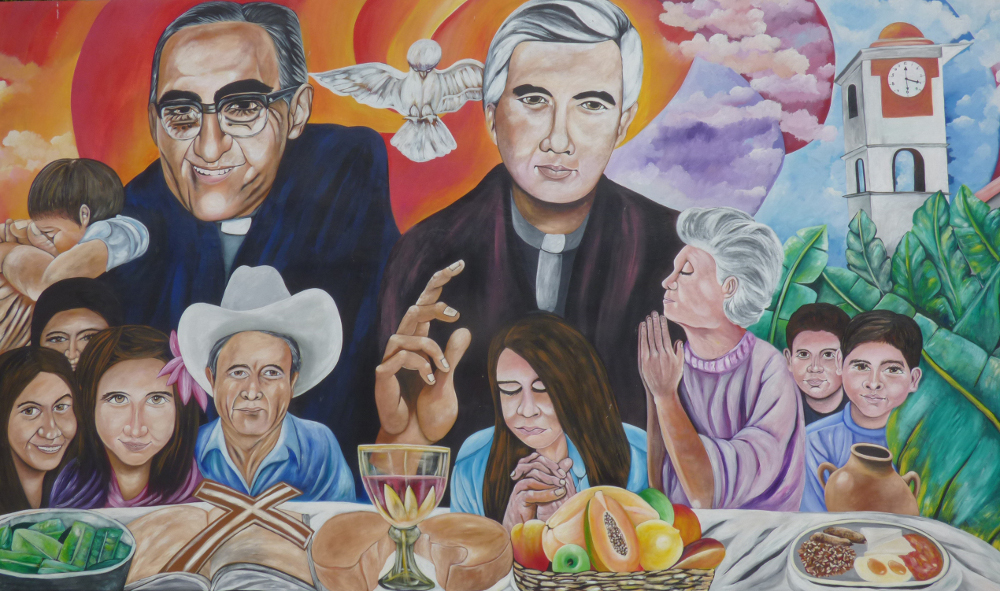 A mural in El Paisnal, El Salvador, seen in this Jan. 29 photo, features Blessed Oscar Romero and town native Fr. Rutilio Grande, surrounded by the community Grande served from 1972 until his March 12, 1977, assassination. Grande's death is thought to have inspired Romero, and Pope Francis has spoken in favor of Grande's canonization since early in his papacy. (CNS/Rhina Guidos)

Since the beginning of his pontificate, Pope Francis has expressed strong support for the canonization of martyred Jesuit Fr. Rutilio Grande, said Manuel Roberto Lopez, El Salvador's ambassador to the Holy See.

When the ambassador asked for help in "accelerating the beatification of Archbishop Oscar Romero" in 2013, Lopez said, "the pope enthusiastically replied, 'Yes, yes, yes. We will do that soon in my pontificate.' He paused briefly and said, 'And right after comes (Father) Rutilio Grande.' "

"I was stunned" that the pope knew how important Grande was and that he already had been thinking of the slain priest's sainthood cause, Lopez told Catholic News Service March 2.

Grande was known as a champion of the poor and the oppressed at a time when El Salvador was on the threshold of a civil war, a war that eventually killed over 70,000 people.

His death in 1977 at the hands of El Salvador's notorious death squads is believed to have been the inspiration for his friend Romero — known for being less outspoken — to take up the mantle of defending the poor as Grande did.

Lopez told CNS that although he didn't know the Jesuit priest personally, he remembered the shock of hearing "the news that an innocent priest who was close to the people and on his way to celebrate Mass was murdered."

Now, nearly 41 years after Grande's death, the Salvadoran ambassador said he is in awe at the impact the martyred priest's life and death has today.

"As an ambassador, I was surprised to realize that his person and his witness are known and venerated in many parts of the world," he said.

El Salvador's embassy to the Holy See organized a conference Feb. 23 at Rome's Pontifical Gregorian University on the life and death of Grande and the impact of his ministry on the country's forgotten people: the poor.

The purpose of the conference, Lopez told CNS, was so that religious men and women, students and seminarians would "know who he was and what his ministry was about so they can learn from his example of being close to the people, to be with the needy."

The ambassador said Pope Francis also acknowledged that like Blessed Oscar Romero, Grande's road to sainthood was stalled due to misunderstandings and slander.

Speaking off-the-cuff to a group of pilgrims from El Salvador in October 2015 following Romero's beatification, the pope said that he witnessed Romero's reputation trampled, even after his death.

"I was a young priest and a witness to this — he was defamed, slandered, his memory tarnished, and his martyrdom continued, including by his brothers in the priesthood and in the episcopate," the pope said. "This is not hearsay; I heard those things."

"During that meeting, the pope said it very clearly. He said that after his death, he continued to be martyred, after his death he was martyred through hearsay which, for the pope, is something terrible," Lopez told CNS.

The pope also said that, as a priest, he heard several bishops accuse Grande and Romero "of being responsible for the death of 70,000 people" during the 1980-1992 Salvadoran civil war, he recalled.

For this reason, the Salvadoran ambassador said, events like the recent conference in Rome are important so that all people can be inspired by the example left by the slain Jesuit's life.

"It is a call, especially for the Latin American people, to support and make known the life and ministry of Fr. Rutilio," Lopez said.