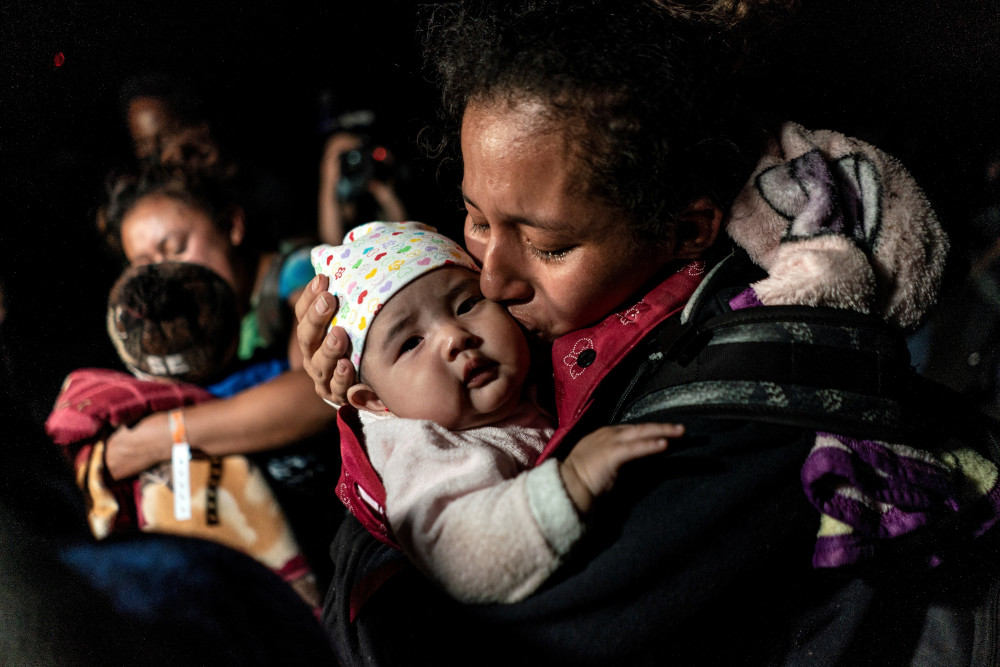 Ceidy, an asylum-seeking migrant mother from Guatemala, kisses her 3-month-old baby Bridget while waiting to be escorted by the U.S. Border Patrol agents after crossing the Rio Grande into Roma, Texas, April 7, 2021. (CNS/Reuters/Go Nakamura)

As countries become more culturally and ethnically diverse, their Catholic communities become more "catholic" and their societies can increasingly reflect the fact that all people are brothers and sisters, Pope Francis said.

"In encountering the diversity of foreigners, migrants and refugees, and in the intercultural dialogue that can emerge from this encounter, we have an opportunity to grow as church and to enrich one another," the pope wrote in his message for the World Day of Migrants and Refugees, which will be marked Sept. 26 in most countries.

"All the baptized, wherever they find themselves, are by right members of both their local ecclesial community and the one church, dwellers in one home and part of one family," the pope wrote in the message, which was released May 6 at the Vatican.

The message called on all Catholics to build up the church by welcoming and getting to know Catholic migrants and refugees and reaching out with a witness of charity to members of other religions, and it called on all people to enrich the diversity of their countries by accepting newcomers and ensuring they are not left languishing in poverty.

Cardinal Michael Czerny, undersecretary of the Vatican's Migrants and Refugees Section, was asked about people who fear, for example, that continuing migration will bring more Muslims to Europe, contributing to a further decline of Christianity on the continent.

"It is a real problem if one feels insecure or threatened or vulnerable in one's faith life because of others," he said. "We need to get beyond the 'wall,' beyond the barrier," and a first step could be to ask, "Have I ever spoken with or even listened to someone from that other faith? Do I know what I am talking about or am I relying on images and slogans and hearsay?"

A Christian has an obligation to seek the truth, the cardinal said, "and not rely on these fear-mongering cliches which are not only baseless but are, in fact, serving other motives."

The theme the pope chose for the day is "Toward an ever wider 'we,'" and it builds on the teaching in his encyclical, "Fratelli Tutti, on Fraternity and Social Friendship."

In the encyclical, his message said, "I expressed a concern and a hope that remain uppermost in my thoughts: 'Once this health crisis passes, our worst response would be to plunge even more deeply into feverish consumerism and new forms of egotistic self-preservation." 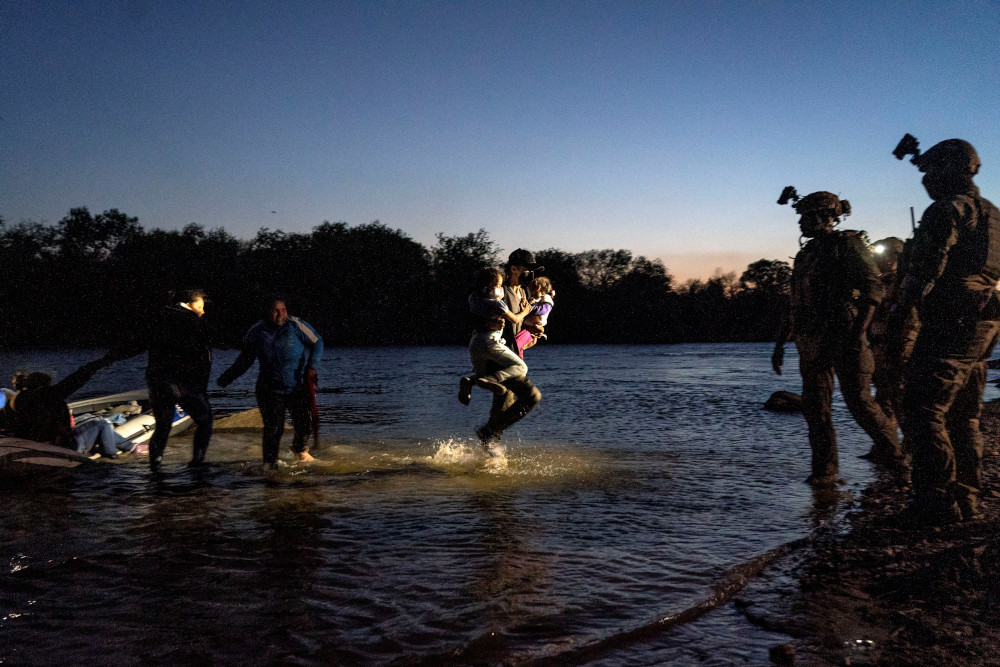 An asylum-seeking migrant carries two girls while walking in the Rio Grande as Texas Ranger officers await at the riverbank in Roma, Texas, April 5, 2021. (CNS/Reuters/Go Nakamura)

God created human beings different from one another but as members of one family, the pope said. "When, in disobedience we turned away from God, he in his mercy wished to offer us a path of reconciliation, not as individuals but as a people, a 'we,' meant to embrace the entire human family, without exception."

In today's world, though, "this 'we' willed by God is broken and fragmented, wounded and disfigured," he said.

"Our 'we,' both in the wider world and within the church, is crumbling and cracking due to myopic and aggressive forms of nationalism and radical individualism," Pope Francis said. "The highest price is being paid by those who most easily become viewed as others: foreigners, migrants, the marginalized, those living on the existential peripheries."

For Catholics, he said, bucking the trend and welcoming others is part of "a commitment to becoming ever more faithful to our being 'catholic,'" or universal.

Catholics, he said, are called to work together "to make the church become ever more inclusive as she carries out the mission entrusted to the Apostles by Jesus Christ" to proclaim the Gospel and care for those in need.

"In our day," the pope said, "the church is called to go out into the streets of every existential periphery in order to heal wounds and to seek out the straying, without prejudice or fear, without proselytizing, but ready to widen her tent to embrace everyone."

The global movement of people, he said, means "our societies will have a 'colorful' future, enriched by diversity and by cultural exchanges. Consequently, we must even now learn to live together in harmony and peace."

"We must make every effort to break down the walls that separate us and, in acknowledging our profound interconnection, build bridges that foster a culture of encounter," the pope insisted.

Joining the Vatican news conference from England, Auxiliary Bishop Paul McAleenan of Westminster said people in wealthy nations that extract resources from poorer countries and contribute heavily to climate change must recognize "that we are not blameless" in causing people to flee their homes.

In response, he said, "the aim of the church is to welcome, protect and promote all, knowing that human life and well-being are at risk, not national security."

Salesian Sr. Alessandra Smerilli, undersecretary of the Dicastery for Promoting Integral Human Development, said using the excuse of "we have to take care of our own first" will not work in ending the COVID-19 pandemic nor in stemming the flow of migration because of conflict, poverty or climate change.

"In an interconnected world, we must understand," she said, that "we are all in the same boat."