Pope's Itinerary For Visits To Cuba, US 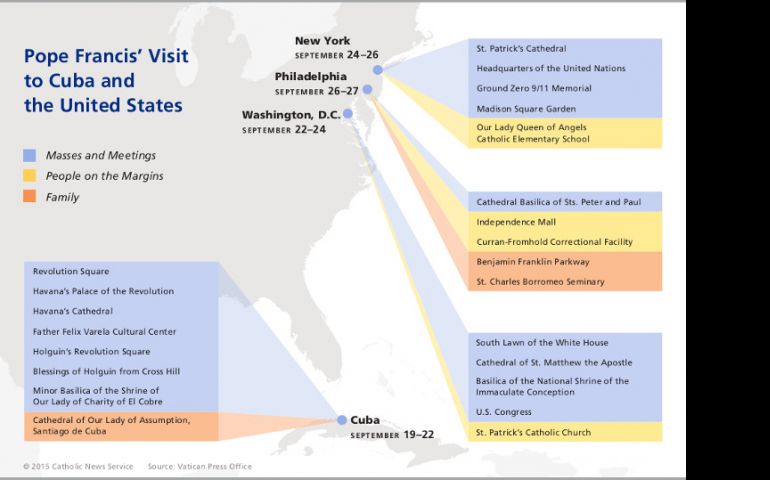 All times USA eastern. Major address are available by live streaming through the Vatican Youtube channel and various other websites.

09:00 Holy Mass at Plaza de la Revolución in Havana [Arabic, English, French, German, Italian, Polish, Portuguese, Spanish]
Angelus
16:00 Courtesy Visit to the President of the Council of State and of the Council of Ministers of the Republic at Palacio de la Revolución in Havana
17:15 Celebrations of Vespers with Priests, Men and Women Religious and Seminarians at the Cathedral of Havana
18:30 Greeting to the young people of the "Centro Cultural Padre Félix Varela" in Havana

08:00 Departure by plane from Havana for Holguín
09:20 Arrival at “Frank Pais” International Airport of Holguín
10:30 Holy Mass at Plaza de la Revolución in Holguín
15:45 Blessing of the city from Loma de la Cruz in Holguín
16:40 Departure by plane for Santiago
17:30 Arrival at “Antonio Maceo” International Airport of Santiago
19:00 Meeting with the Bishops at St Basil The Great Seminary in Santiago
19:45 Prayer to the Virgen de la Caridad with the Bishops and the Papal Entourage at the Minor Basilica of the Shrine “Virgen de la Caridad del Cobre” in Santiago

9:20 Visit to the Congress of the United States of America [Arabic, English, French, German, Italian, Polish, Portuguese, Spanish]
11:15 Visit to the Charitable Center of St. Patrick Parish and meeting with the homeless in Washington, D.C.
16:00 Departure by plane for New York
17:00 Arrival at JFK Airport in New York
18:45 Vespers with the Clergy, Men and Women Religious at St Patrick's Cathedral in New York

08:30 Visit to the Headquarters of the United Nations
11:30 Interreligious encounter at the Ground Zero memorial in New York
16:00 Visit to "Our Lady, Queen of the Angels" School and meeting with children and families of migrants in New York (Harlem)
18:00 Holy Mass at the Madison Square Garden in New York

09:15 Meeting with bishops taking part in the World Meeting of Families gathered at St. Charles Borromeo Seminary in Philadelphia
11:00 Visit to detainees at Curran-Fromhold Correctional Facility in Philadelphia

16:00 Holy Mass concluding the World Meeting of Families at B. Franklin Parkway in Philadelphia
19:00 Greeting to the organizing committee, volunteers and benefactors at the International Airport of Philadelphia
19:45 Farewell ceremony
20:00 Departure by plane from Philadelphia for Rome/Ciampino

Pope's Itinerary For Visits To Cuba, US