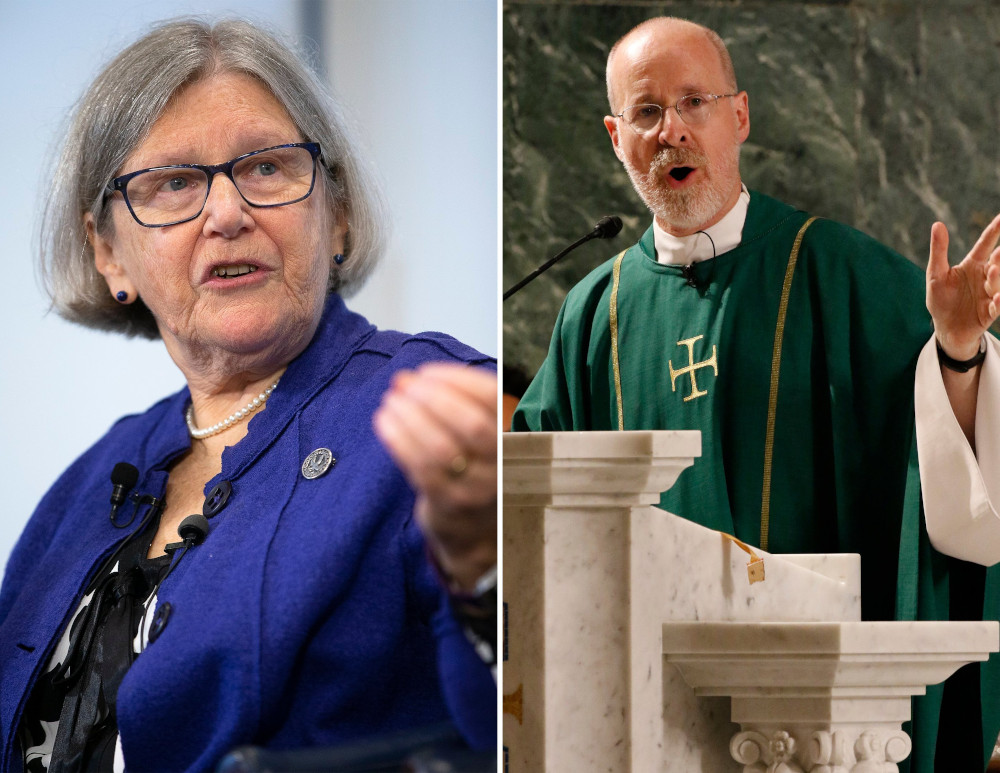 Sr. Simone Campbell, a Sister of Social Service, who is executive director of the Catholic social justice lobby Network, and Jesuit Fr. James Martin, author and editor at large of America magazine, are seen in this undated composite photo. (CNS composite/photos by Tyler Orsburn and Gregory A. Shemitz)

Prayers offered by a pair of prominent Catholics during the closing night of the Democratic National Convention focused on addressing the needs of people on the margins of society and a planet facing environmental catastrophe.

Democratic presidential candidate Joe Biden, who is Catholic, accepted the party's nomination for president during the evening's events.

Campbell, a member of the Sisters of Social Service, and Martin, pre-recorded their respective prayers earlier. Campbell offered the invocation and Martin delivered a benediction.

In her opening prayer, Campbell called upon the "Divine Spirit" to "stir our hearts and minds that we might fight for a vision that is worthy of you and your call to honor the dignity of all of your creation."

She prayed for "a vision of who we are as a people, grounded in community and care for all, especially the most marginalized. A vision that care for our earth and heals the planet. A vision that ends structural racism, bigotry, sexism so rife now in our nation and in our history. A vision that ensures hungry people are fed, children are nourished, immigrants are welcomed."

Campbell implored that God "breathe in us and our leaders a new resolve" to work together "to build a national community grounded in healing, fearlessly based on truth, and living out a sense of shared responsibility."

Martin said his benediction focused on "the dignity of all human life, including the unborn, including LGBT people, including inmates on death row."

"For me that was essential," he told Catholic News Service. "It was very important for me to present the consistent ethic of life, and to present the full complement of the church's teaching on life."

"Open our hearts to those most in need," he said in the pre-recorded prayer, "the unemployed parent worried about feeding his or her children. The woman who is underpaid, harassed or abused."

His litany included "the Black man or woman who fears for their lives. The immigrant at the border, longing for safety. The homeless person looking for a meal. The LGBT teen who is bullied. The unborn child in the womb. The inmate on death row."

"Help us be a nation where every life is sacred, all people are loved and all are welcome. Amen," he said.

Martin said he would have offered the same prayer at the Republican National Convention, if he had been invited.

"I think it's important to pray for all these people all the time," he said.

Martin's prayer was one of three offered as a benediction. Joining him in pre-recorded prayers were Rabbi Lauren Berkun, vice president of the Shalom Hartman Institute or North America, and Imam Al-Hajj Talib 'Abdur-Rashid, a Muslim social justice activist in New York.

Meanwhile, Cardinal Timothy M. Dolan of New York will offer a prayer Aug. 24 during the opening night of the Republican National Convention. President Donald Trump and Vice President Mike Pence will be nominated as the Republican Party's candidates for a second term during the night's activities.

The GOP's platform on abortion is generally viewed as closer to the Catholic Church's teaching than the Democrats' platform, which supports legal abortion. Democratic nominee Biden supports legalized abortion.