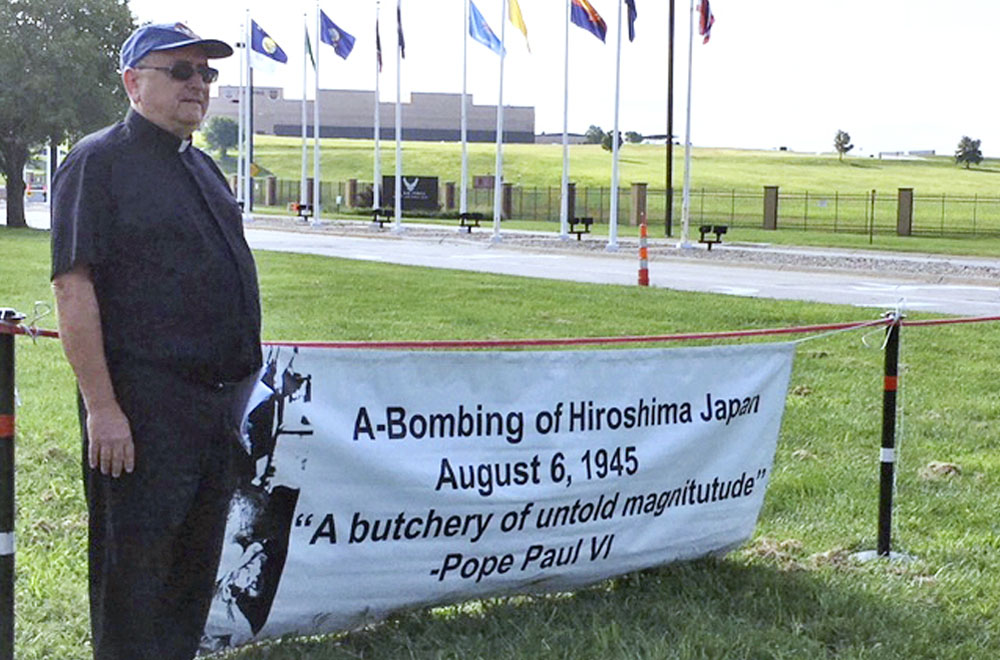 Fr. James Murphy, a Wisconsin pastor, outside Offutt Air Force Base in Nebraska where he would later be arrested for trespassing as part of an anti-nuclear weapons protest Aug. 6, the 73rd anniversary of the nuclear bomb dropped on Hiroshima, Japan. (Provided photo)

Pope Francis inspired him to do it.

Fr. James Murphy, a Wisconsin pastor, was arrested Aug. 6 for trespassing at the Offutt Air Force Base outside Omaha, Nebraska, as part of an anti-nuclear weapons protest timed to mark the 73rd anniversary of the Hiroshima bombing.

He was released pending a further hearing. Murphy could face up to six months in prison.

"All nuclear weapons need to be banned," Murphy told NCR upon his return to Wisconsin, where he serves as pastor of Sts. Anthony & Philip Parish in Highland and St. Thomas in Montfort, both a part of the Diocese of Madison.

That viewpoint reflects that of Francis, who last year advanced the church's traditional doctrine opposed to nuclear weapons, once viewed as morally acceptable as a temporary measure, to a stronger stance.

"It didn't get a lot of attention," said Murphy, but he said it was such a clear statement that he felt compelled to risk arrest at the Air Force base. He was among about a dozen religiously inspired protesters, including Catholic Workers, a Mennonite, and others, but the only one to be arrested. Murphy walked up to the security booth at the facility and refused to leave when a guard asked him to. He was promptly arrested.

In a November 2017 Vatican address, Francis warned that the survivors of Hiroshima offered humanity "a warning, above all for coming generations."

The pope said that even possessing nuclear weapons is to be condemned, and argued that the world faced renewed threats from their accidental use as well as the threat they might get into the hands of terrorists.

Since 9/11, civil disobedience actions at military facilities have been met with stronger responses by the government, including lengthened prison terms.

This Sunday Murphy will return to his rural parishes to celebrate Mass. He told his parishioners about his plan to get arrested in a civil disobedience action.

They greeted the idea by expressing respect for his beliefs, even though many disagree with him, said Murphy.

That response was similar to that of his bishop, Robert Morlino, who is widely known for his support for traditionalist views and once served on an advisory board for the School of the Americas, a U.S. Army training facility for Latin American officers, long opposed by Catholic activists who argue it is a training ground used to benefit authoritarian governments.

Related: Nuclear disarmament is possible if we have faith and act on it

Morlino told Murphy that he would pray for him and that while he disagreed with the action, he was supportive of the priest's conscience decision.

Murphy has been arrested before in civil disobedience actions, but expects this time he will face more dire consequences.

Prison time, he said, is "fully a possibility. I don't know what this will mean in my life. The regimen of prison life will be very different," he said.