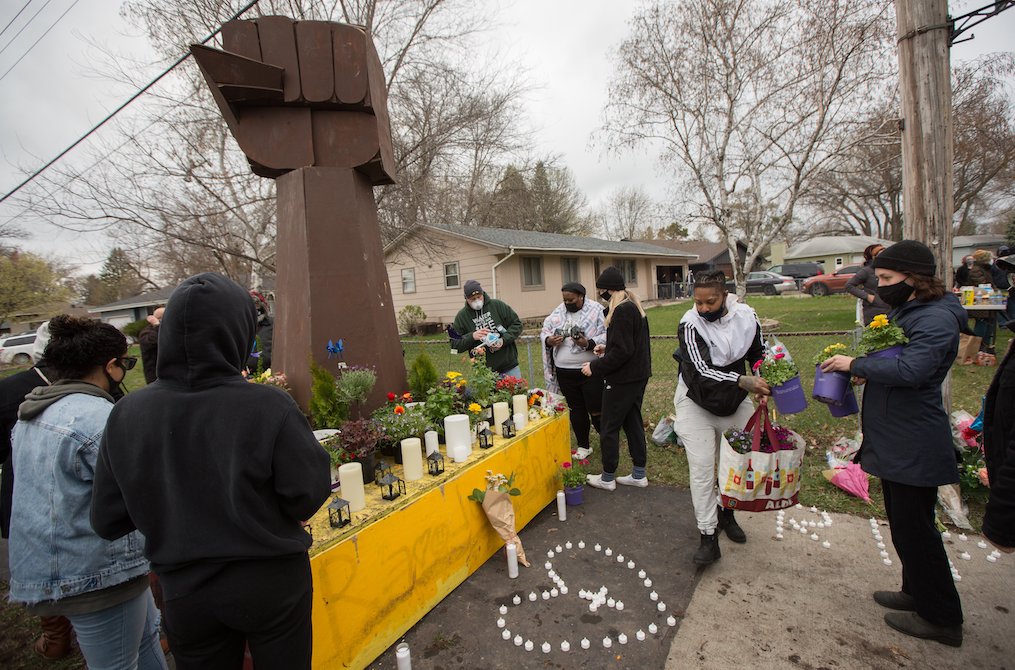 Family members, friends and other members of the community gather at a memorial put up at the site in Brooklyn Center, Minnesota, April 12, 2021, where Daunte Wright was shot by a Brooklyn Center police officer and died April 11 during a traffic stop. (CNS/The Catholic Spirit/Dave Hrbacek)

According to body camera footage, Kim Potter of the Brooklyn Center Police Department shot and killed 20-year-old Wright on April 11 after allegedly pulling him over for an expired license plate. Potter, who had been a police officer for 26 years, claimed that Wright resisted arrest and that shooting him was an accident, according to the local news station KARE11.

"I don't understand the use of force, right on the spot on someone who is unarmed … What happened to Daunte is avoidable," Okwara said. "They should have let him go and then gone after him much later. And now another young one has been killed."

Okwara said the police killing of George Floyd in nearby Minneapolis in May 2020 affected him very deeply. The ongoing trial of the officer who killed Floyd, Derek Chauvin, had brought back those memories and that pain. He said after Wright's death, a parishioner came to see him and ask how he was doing.

"When an African American person is shot, it affects me, too, the priest," Okwara said. "We are human beings too — we have emotions too — we can grieve. We have feelings. This is hard."

During a vigil held April 12 in her son's memory and broadcast on Facebook Live by a local Fox channel, Katie Wright, Daunte's mother, said her son, who is the father of a 2-year-old boy, was funny, sweet and had an "angelic" smile.

"My heart is literally broken into a thousand pieces and I don't know what to do or what to say … I just need everyone to know that he was my life," Wright said. "He's my son, and I can never get that back. Because of a mistake, because of an accident?" 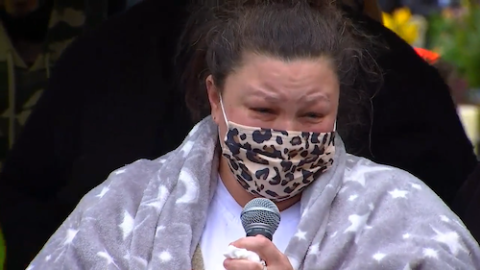 Katie Wright, Daunte Wright's mother, speaks during a vigil held in her son's memory the evening of April 12. She said her 20-year-old son, whom police shot and killed on April 11, was a sweet and funny person with an "angelic" smile. (NCR Screenshot/Facebook Live/Fox 9)

Katie Wright, told KARE11 that she had been on the phone with her son when the police pulled him over and demanded he get out of the car and put down the phone. When she called back minutes later, Daunte's girlfriend answered and said Daunte had been shot.

Redemptionist Fr. John Schmidt, pastor at St. Alphonsus, told NCR the parish and the community are grieving Wright's death, particularly those who live near where Wright was killed, which is less than 2 miles from the church.

Schmidt, who is white, said he sent out a pre-recorded call to all members of the parish the night of April 12 to offer his condolences for Wright's family and acknowledge the tragedy.

"[I asked that] we pray for peace, and we also pray to help understand one another, and to support each other," Schmidt said. "And to look for ways to eliminate racism in our own personal lives, then our parish, and then hopefully, in the wider community."

While Schmidt said St. Alphonsus is planning to hold its own events to honor Wright, including a possible prayer service or novena, leaders from other congregations spoke out against racial injustice at Wright's vigil April 12.

"I am so tired of asking God, 'How long, oh Lord, how long?' I am so tired of things being out of order, when mothers put their children in the ground while they are still children," said the Rev. Angela Khabeb of Holy Trinity Lutheran Church.

Khabeb, who is Black, added, "I'm so tired that we built this nation, and this nation doesn't even want us to live — gonna stop us driving down the street because our tags are expired." 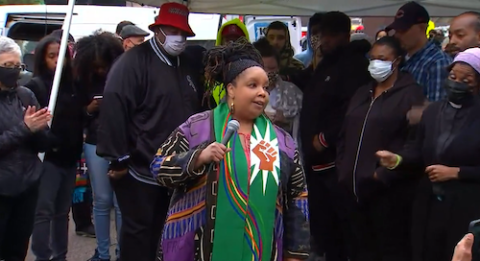 Rev. Angela Khabeb speaks during a vigil held in memory of Daunte Wright on April 12. Local police shot and killed 20-year-old Wright, who was a biracial Black man. Khabeb said she is "tired" of watching mothers bury their children lost to police violence. (NCR Screenshot/Facebook Live/Fox 9)

Schmidt and Okwara said the parish council was planning to meet on the evening of April 13 to decide how best to honor Wright's memory and fight racism in their parish and the community.

After Floyd's death, the parish held two workshops on racism, Schmidt said. Okwara said the parish is very diverse, with African, Black American, Vietnamese, Latino and white parishioners. Many of them shared personal stories of how racism had affected them, he said.

"Some people cried, and we all resolved that whenever we hear someone make a racial comment, you have to defy it right there," Okwara said. "Christians have to confront the person. They don't say, 'Well, it is not my problem.' "

He said people of all races need to see that what hurts one group ultimately hurts everyone. Human people are interdependent, like organs in a body, he said.

"The kidney cannot say to the lungs that are infected, 'That is your problem,' because it's only a matter of time before the problem of the lungs becomes a problem of the kidneys, the heart and the entire body," Okwara said. "So we have to see that we are all connected."

Okwara said he was heartened to see young people of all races protesting against racism after Floyd's death in 2020.

"That's what the church should do," he said.

He said he'd like St. Alphonsus to have a day where parishioners gather around the church, hold signs and let the community know who they are and what they stand for. He'd also like to see parishioners calling their officials at all levels to push for change.

Okwara said he believes it's time to seriously overhaul the police.

Schmidt said Catholics nationwide should ask themselves if they know their neighbors and the issues they are dealing with. He said many people like to think these tragedies wouldn't happen in their communities, until they do.

Okwara said racism and police brutality need to be an ongoing conversation for Catholics in their churches and communities.

"I want all Christians to stand up and be counted," he said. "I think this is what Jesus would have wanted." 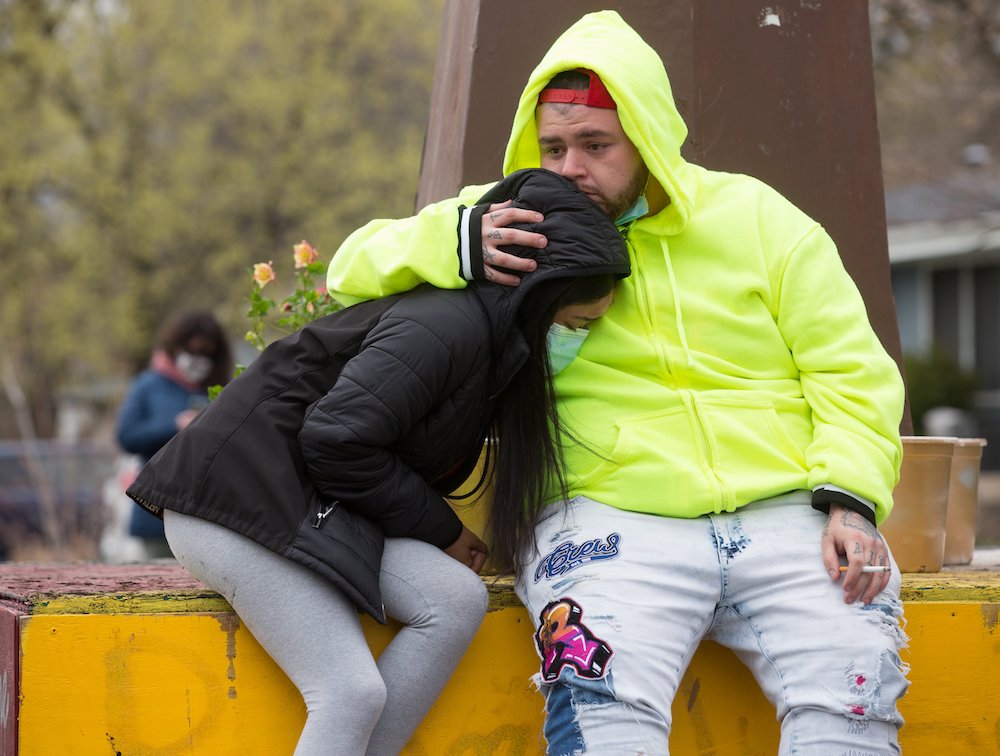 Daunte Wright's brother, Damik, right, hugs a friend April 12, 2021, at the site in Brooklyn Center, Minnesota, where Daunte was shot by a Brooklyn Center police officer and died April 11 during a traffic stop. Family, friends and members of the community put up a memorial at the site and gathered for a vigil. (CNS/The Catholic Spirit/Dave Hrbacek)