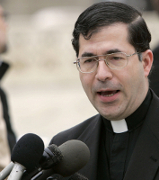 Fr. Frank Pavone is pictured speaking to the media outside the Supreme Court building in Washington in this Nov. 8, 2006, file photo. (CNS photo/Bob Roller)

WASHINGTON -- Fr. Frank Pavone, one of the country's most visible and vocal opponents of abortion, has been suspended from active ministry outside the Diocese of Amarillo, Texas, over financial questions about his operation of Priests for Life.
{C}
The suspension was made public in a Sept. 9 letter from Amarillo Bishop Patrick J. Zurek to his fellow bishops across the country, but Father Pavone told Catholic News Service that he was returning to Amarillo and planned to continue functioning as a priest there.

"My decision is the result of deep concerns regarding his stewardship of the finances of the Priests for Life (PFL) organization," Bishop Zurek wrote. "The PFL has become a business that is quite lucrative which provides Father Pavone with financial independence from all legitimate ecclesiastical oversight."

Bishop Zurek said "persistent questions and concerns" from clergy and laity about how the "millions of dollars in donations" the organization has received are being spent led to the action.

The bishop also asked Father Pavone, national director of Priests for Life, to return to Amarillo "to spend time in prayer and reflection."

Father Pavone, meanwhile, told CNS Sept. 13 from Birmingham, Ala., where he had been taping programs for Eternal Word Television Network for more than a week, that he planned to comply with Bishop Zurek's request to return to Amarillo. Father Pavone said he was scheduled to leave Birmingham the afternoon of Sept. 13 and meet with Msgr. Harold Waldow, vicar for clergy in the Amarillo Diocese, immediately after his arrival.

"Bishop Zurek asked me to go back to the diocese today, which I am doing for a limited period of time," Father Pavone said. "I am going there and my (priestly) faculties are fully intact and I'm in good standing."

Father Pavone was incardinated in the Amarillo Diocese in 2005 when Priests for Life moved some of its operations to the Texas panhandle city. Priests for Life was welcomed to Amarillo by now-retired Bishop John W. Yanta, who served on the organization's board of advisers.

Priests for Life no longer has offices in Amarillo. It is based in Staten Island.

Records filed with the Internal Revenue Service show that the organization's income topped $10.8 million in 2008, the latest year tax forms were available. In 2007, Priests for Life showed income of $9.2 million.

A popular lecturer and retreat leader, Father Pavone travels the country speaking against abortion and on other pro-life issues. He also produces programs for secular radio and television.

Father Pavone became national director of Priests for Life in 1993. He also holds the same position with Gospel of Life Ministries, an interdenominational effort to end abortion, which shares its headquarters with Priests for Life.

In addition, Father Pavone is national pastoral director of the Silent No More Awareness Campaign and president of the National Pro-Life Religious Council.

A native of Port Chester, N.Y., he was ordained in 1988 by Cardinal John J. O'Connor of New York and served as a parish priest in the New York Archdiocese until joining Priests for Life full time in 1993.

Anti-abortion activist Frank Pavone is back in church's good graces

Priests for Life founder: Group 'is in jeopardy'

The odyssey continues for Priests for Life