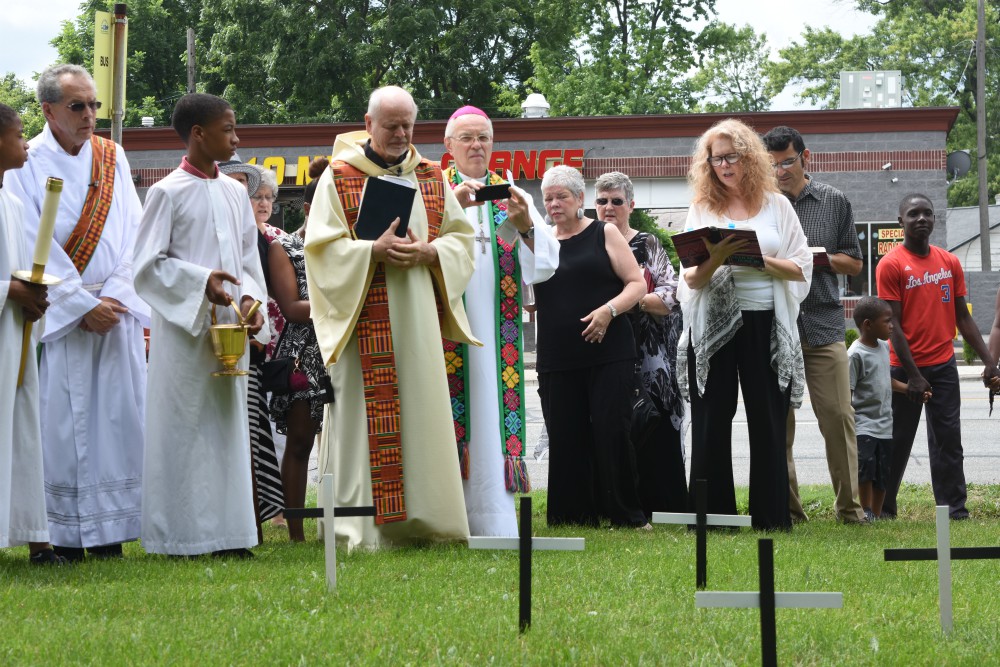 Fr. Victor Clore and members of Christ the King Parish in Detroit pause for a moment of silence July 22, 2017, in front of 44 crosses on the parish's front lawn, one for each of the lives lost in the city's violence of 1967. (CNS/The Michigan Catholic/Dan Meloy)

Even as no one in the Detroit Archdiocese is attending public Mass because of the coronavirus crisis, church officials there have announced that members of Dignity, a support group for LGBT Catholics, will no longer celebrate Catholic liturgy together, even when the health crisis fades.

But that mandate will have to contend with the plans of Fr. Victor Clore, pastor of Christ the King Church in Detroit, who said in a public letter that he will continue to offer Mass for the group when the opportunity arises.

Clore, a priest for 54 years, said that denying access to Dignity is akin to Catholic parishes in the 1960s who denied admission to African Americans, a time when he protested exclusion.

In a letter mailed March 19 to archdiocesan priests and deacons, Clore defended Dignity's ministry and called upon church leaders to extend their welcome to all.

"It naturally occurs, in all cultures, that a small but significant number of human persons have same-sex attraction. It is not a disease or a freak of nature. Same-sex love is their natural way for intimate sexual embrace," Clore wrote.

"Some love involves genital sexual expression; other loving experiences do not — friendship, professional care such as nursing, teaching, ministry, etc. Nevertheless, we are sexual persons; our sexuality is a part of our identity, and sexual overtones are a dynamic in every relationship," he wrote.

Dignity has been a Detroit fixture for more than four decades. It currently meets at the campus chapel of Marygrove College, formerly operated by the Sisters, Servants of the Immaculate Heart of Mary.

Frank D'Amore, director of Dignity Detroit, said that the group has gathered for Mass at Marygrove for more than two decades and, before that, at a parish church in Detroit. He said that despite the archdiocesan mandate, the group will continue.

"We're not having liturgy because of the virus. But we are alive and well," he told NCR.

He said Dignity Detroit will continue to meet once the health crisis allows meetings, and the group will accept offers from priests, including Clore, to celebrate Mass. Dignity Detroit has 66 members, with a little more than half of those attending the Sunday Mass.

The Detroit case is similar to other examples around the country where Dignity has been pushed out of church facilities, said Marianne Duddy-Burke, executive director of the national Dignity office.

"There are few experiences as devastating as being kicked out of your family home and being told you are not worthy of being fed," said Duddy-Burke. "That is what has happened to Dignity members all across the country. Yet we have persisted in sustaining communities that are graciously hosted by other denominations and have found ways to continue to celebrate the sacraments of our church. We will do that in Detroit, if necessary, and will not allow church leaders to deny LGBTQI Catholics our human right to our faith."

Church leaders need a more expansive view of human sexuality, said Clore. "My main point is that human nature is different in nature than animals copulating," he told NCR. "It's all about how humans love each other."

But the archdiocese maintains that Dignity, open to all LGBTQ Catholics, including those who do not accept church teaching that they abstain from sexual activity, needs to be called out on its lack of adherence to church teaching. Auxiliary Bishop Gerard Battersby, in a March 9 letter to priests and deacons in the archdiocese, urged them not to offer Mass for Dignity but to support Courage, a group for gay Catholics that promotes chastity. The archdiocese is led by Archbishop Allen Vigneron. 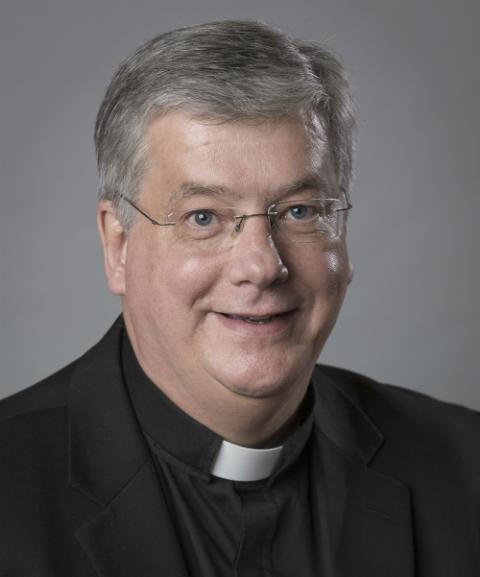 "As we endeavor to provide a culture of empathy and understanding throughout the Archdiocese according to the light of the Gospel, it is essential that the Church not seem to condone Dignity Detroit's competing vision for growth in holiness. While elements of that vision, such as Dignity Detroit's outreach to the poor, are commendable, the organization's rejection of the Church's teaching on chastity is incompatible with the path of sanctification on which Christ bids his Church to travel and is at odds with the important work of the Courage and EnCourage apostolates," Battersby wrote.

Battersby's letter came after Courage representatives spoke to archdiocesan clergy and others at Sacred Heart Seminary in Detroit. He wrote that Courage represents church teaching, while Dignity is opposed to calling LGBT people to chaste lifestyles. The move to expel Dignity and welcome Courage, he said, is part of the archdiocese's wider emphasis on evangelization.

"We seek to leave no one behind in our missionary transformation and to help everyone entrusted to our care find salvation," wrote Battersby.

In a statement to NCR, Clore in part reassured the archbishop. "He doesn't have to worry about me preaching heresy from the pulpit," he said.

"I don't see a need to preach about sex from the pulpit," he noted, emphasizing that he focuses on the Sunday readings.

He described the effort to expel Dignity from the archdiocese as part of a "witchhunt."

In his letter to his fellow priests and deacons, Clore suggested that the archbishop order clergy in the archdiocese to be welcoming to all, and not be suspicious of gay people who come to the church.

"If every parish is doing that there would be no need for Dignity to meet," he told NCR.

[Peter Feuerherd is news editor of the National Catholic Reporter.]