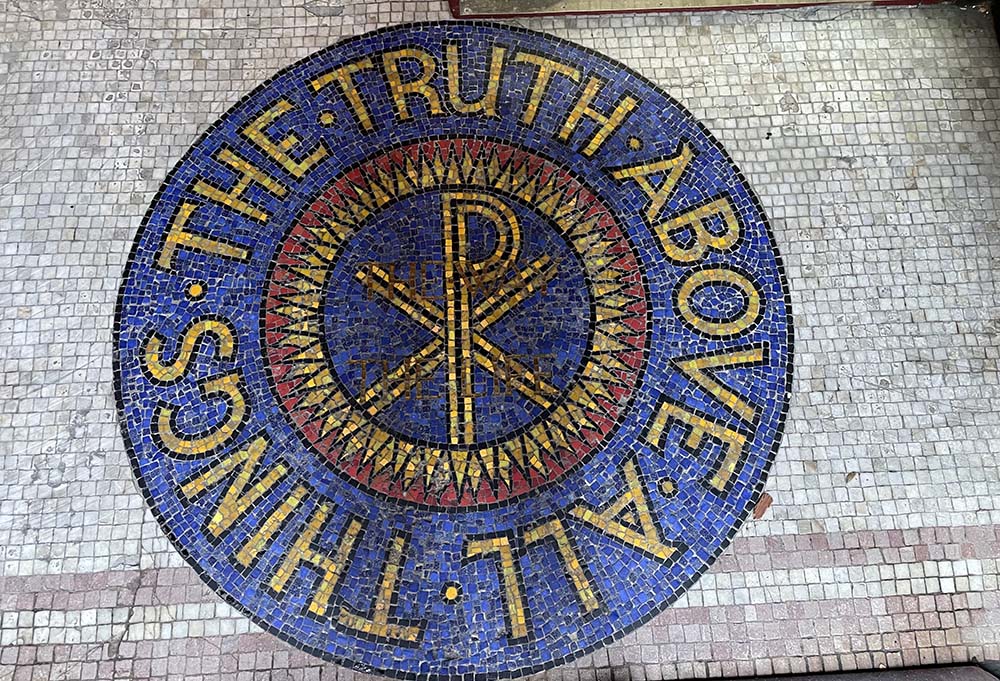 A mosaic at the entrance of the Church of St. Michael in midtown Manhattan, New York, on Dec. 1 (NCR photo)

A floor mosaic inscribed with the words "The Truth Above All Things" welcomes visitors to the Church of St. Michael in midtown Manhattan where popular priest Fr. George Rutler has served as pastor since 2013. Yet Rutler now stands accused of sexually assaulting a female security guard after she allegedly filmed him watching gay pornography last month.

Those allegations have shocked parishioners and associates of Rutler, as they seek to reconcile the accusations with their own experience of the politically and theologically conservative priest known for his regular appearances on EWTN and prolific writings where he derided "abortionists and the sodomites," advocated for traditional liturgical practices and regularly criticized Pope Francis.

Rutler maintains his innocence. In a letter addressed to parishioners on Nov. 20, Rutler says that a security guard hired to provide additional security during the election had accused him of improperly touching her on one occasion.

"I strongly deny this allegation, which I maintain is incoherent and painful to my reputation and inconsistent with how I have conducted myself in fifty years of ministerial service without any accusation of misbehavior," he wrote.

Further details of the allegations emerged during a Nov. 26 cable TV interview with 22-year-old Ashley Gonzalez. She claimed that on the early morning of Nov. 4, the priest "aggressively threw himself on me and grabbed me sexually, aggressively, and I was fighting him off of me."

Rutler's alleged attack on Gonzalez came after she used her cellphone to record footage of the pastor at a computer watching gay pornography.

The 18-second footage, obtained by NCR, shows the back of a man sitting underneath a cluster of religious icons and portraits watching a computer screen depicting a man performing oral sex on another man. The man seen watching the screen is seemingly bald, as is Rutler, although his identity could not be confirmed.

Gonzalez told News 12 that Rutler was "like a monster," describing the alleged attack on her second day during the job. The News 12 report also chronicles a series of texts Gonzalez sent to her mother saying she didn't feel safe and that she was almost raped.

She declined NCR's request for an interview through Manuel Gomez of Black Ops Private Investigators, who represents Gonzalez, but Gomez told NCR that he was contacted by Gonzalez within hours after the alleged attack.

He said Gonzalez filed a police report detailing how Rutler allegedly slammed the door of his office, preventing her from fleeing, and grabbed her before she managed to escape. According to Gomez, Rutler had invited Gonzalez to rest in his office in between her rounds of the church property.

According to Gomez's account, Rutler entered his office to check the election results and then switched over to viewing pornography. Gomez said that the cellphone video footage recorded by Gonzalez had been turned over to the police and sent to the New York Archdiocese and the Holy See.

Danny Frost, director of communications for the Manhattan district attorney, declined to comment, writing in an email to NCR that the office "does not confirm whether investigations exist."

Rutler also declined NCR's request for comment, stating in an email, "I am not permitted by Counsel to comment except that I enjoy the confidence of my superiors and am totally innocent. Until this matter is adjudicated it is prudent to avoid comment and potential libel." 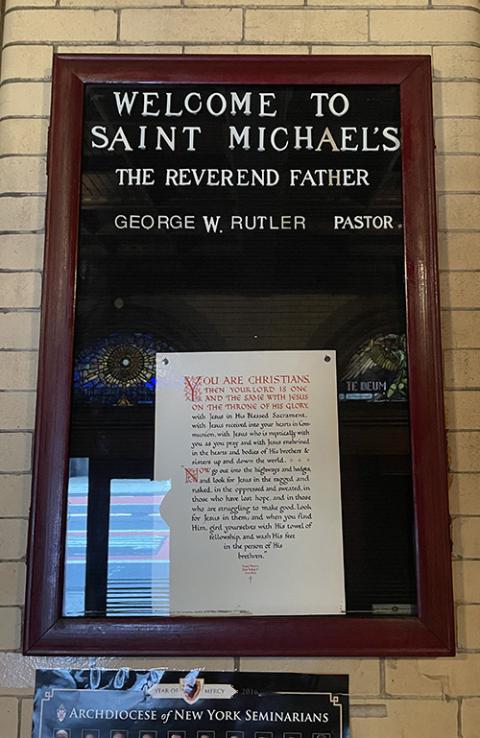 A parish announcement board inside the Church of St. Michael in midtown Manhattan, New York, on Dec. 1 (NCR photo)

Since taking over as pastor of the 34th Street church in 2013, Rutler's parish has become a haven for a number of traditionalist causes and individuals. In 2018, he hosted former Trump adviser Steve Bannon at the inauguration of a shrine for persecuted Christians, and in 2019, he was awarded the Stanford White Award for Craftsmanship and Artisanship by the Institute for Classical Art and Architecture. In addition to EWTN, which has temporarily suspended Rutler's programs, the 75-year-old priest has been a regular contributor to Crisis Magazine and his weekly newsletter has been reprinted by the fringe right-wing website Church Militant.

As an Anglican convert to Catholicism, the Dartmouth graduate has served as national chaplain to Legatus, an organization for wealthy Catholic business leaders, and he frequently boasts of having been named an honorary Texan by President George W. Bush when he was governor of the state.

Prior to being appointed as pastor of St. Michael, Rutler was the longtime pastor of the Church of Our Savior on Park Avenue. When Cardinal Timothy Dolan reassigned him in 2013 after he had reached the archdiocese's pastoral term limits, many of his allies protested the move, praising Our Savior as a "vibrantly orthodox" parish.

Zwilling told NCR that Rutler "does not have an assignment at this time" and "he is not serving as a priest," although the church signage and the Nov. 29 bulletin from the church continues to list Rutler as pastor.

In his pastor's column, reprinted from 2009, he laments declining fertility rates in Europe, rising Islamic immigration and a decline in marriage. He also urges parishioners to face the lessons of Advent: death, judgment, heaven and hell.

"Christ does not call us to cope with the culture, but to transform it," he writes. "Transformation happened in a decaying Roman Empire and it can happen in our quaking modern imperium, but only by facing reality."