Prophetic action can grow out of confusion, nuns are told 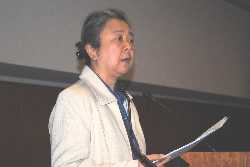 Using imagery from the Acts of the Apostles and a story of Lydia, a women who broke boundaries after she became a follower of Jesus, Religious Sister of the Cenacle Judette Gallares today called upon the women to open up their hearts to conversion.

She laid out the steps of conversion, a movement, she said, that takes one through confusion and darkness into quiet contemplation, to awakening and finally to prophetic action.

Gallares listed the movements and phases of ongoing conversion as a guide to help the 800 women gathered at the plenary assembly of International Union of Superiors General. The topic of this year’s gathering is mysticism and prophecy.

The following is a brief synopsis of Gallares remarks on the phases of conversion:

The first phase of conversion is an experience of darkness or confusion, an awareness of emptiness that needs to be filled, of thirst that needs to be quenched, of questions that beg for answers; yet there does not seem to be anything or anyone who could satisfy these needs. For some, this phase manifests itself in an experience of incongruities — in oneself or in life itself. In other words, deep and authentic conversion experiences do not just come about as experts in this field tell us.

The second phase is the phase of awakening. This is when one’s spirit is awakened by the touch of God, priming it to listen intently to the Word of life.

What follows after the awakening is the phase of prophetic action, an experience of an initial impetus of faith, a sudden surge of inspiration which brings about enthusiasm and desire to put one’s new-found conviction or belief into action. This frequently effusive change in one’s attitude and values is what we commonly call a conversion or a transformation. We usually have this phenomenon in mind when we think of conversions.

What follows then is a phase of silence. This is called the quiet phase where time is needed for contemplation. A frequent and faithful entering into the heart to listen and discern God’s word in the world is necessary for prophetic action. For change brought about by conversion to have its deep and lasting effect on the person, a quiet phase is necessary after the ebullient stage. This is a time of reflection, of withdrawal and moments of aloneness, a time for making sense of what has happened, a time of testing the authenticity of one’s mystical experience and the depth of one’s conviction to engage in prophetic action. This is the time of internalizing the values put forth by the newly accepted and deepening faith.

The quiet phase eventually leads to the fifth and final phase, or movement, which is the integration phase. Here, the person makes the substance of the conversion an integral part of one’s being. The period of silence and withdrawal has provided the time to make sense of what has happened, to integrate the change of attitude, perspective and belief into one’s history and life, and to form a synthesis of all the parts of the mystical and prophetic experience of conversion.

Contemplation and mysticism require a growth in one’s capacity for discernment and critical thinking in the quest for the authentic self. An ongoing life of prayer is important in this stage, to discern continually the action of the Spirit in one’s life. Prophetic speaking and acting do not have the advantage of hindsight precisely because it is addressed to “what is happening” right now.

Thus the more contemplative the person is, the more one can make appropriate prophetic action even without the privilege of long periods of prayer. This phase will enable the person to enter again into the community of faith and to put that faith into action based on one’s conviction. The prophetic task is to focus the Word, the proclamation of the Reign of God, directly on and in a particular situation.

Gallares concluded her talk, saying that religious women are being called to be more attentive to the presence of the sacred in their inner journeys, in the lives of others, and throughout the whole of creation.

“Recognising contemplation as a way of life for the whole church, we religious will see our communities and ourselves as centers of spirituality and the experiences of God. Just as the first Christian community in Acts — who gathered together in deep prayer as they awaited the birth of a new beginning — experienced an impelling force of the mighty wind that emboldened them to engage in prophetic action of proclaiming and witnessing to the Word to the ends of the earth, we too are called to live our religious commitment in the same pattern as we continue Christ’s mission in our world today.”

Fox is NCR Editor and can be reached at tfox@ncronline.org.

Prophetic action can grow out of confusion, nuns are told