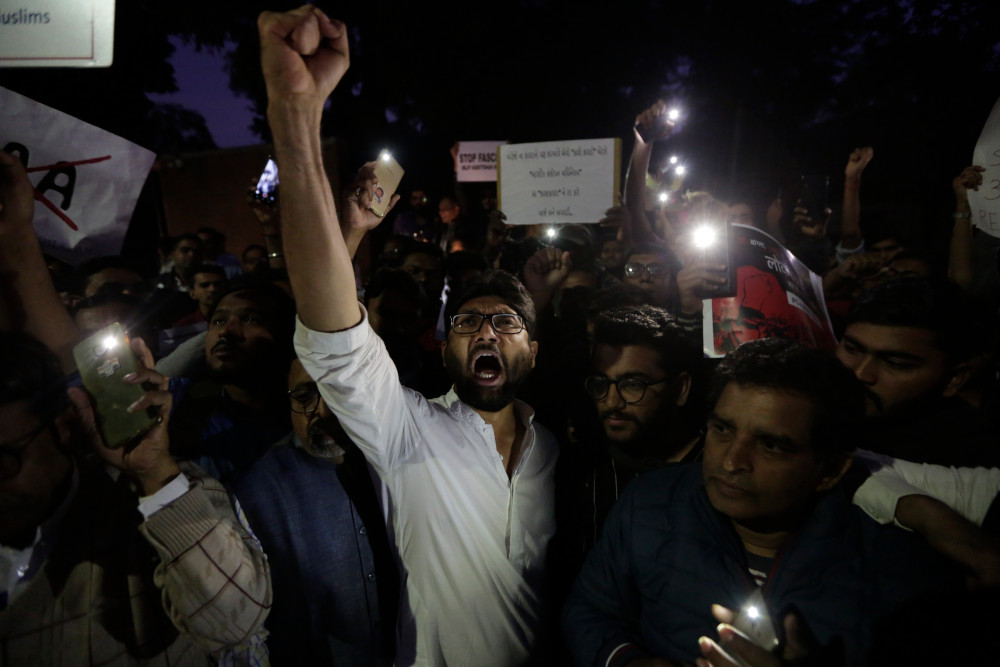 Gujarat state lawmaker and Dalit leader Jignesh Mevani, center shouts slogans during a protest against a new citizenship law out side Gandhi Ashram in Ahmadabad, India, Tuesday, Dec. 17, 2019. Indian student protests that turned into violent clashes with police galvanized opposition nationwide on Tuesday to a new law that provides a path to citizenship for non-Muslim migrants who entered the country illegally from several neighboring countries. (AP/Ajit Solanki)

Protests spread December 17 across India against a new law that provides a path to citizenship for non-Muslims entering illegally from several neighboring countries, with angry demonstrators clashing with police.

Police fired tear gas in the Seelampur area of New Delhi to push back demonstrators who burned a police booth and two motorbikes after throwing stones and swarming barricades.

Roads leading to the Muslim-majority neighborhood were littered with stones, tear gas canisters and broken glass.

"We are protesting against the new citizenship law. They are saying if you don't have any proof (of citizenship) … they will send us out of India," said 15-year-old Mohammad Shehzad.

Protests also were reported in the states of West Bengal, Kerala, Karnataka and elsewhere of the law, which was passed in Parliament last week. On Sunday, a march by students at New Delhi's Jamia Millia Islamia University descended into chaos when demonstrators set three buses ablaze. Police responded with rubber bullets and tear gas. Video showed officers chasing unarmed protesters and beating them with sticks.

Hanjala Mojibi, an English major at the predominantly Muslim school, said that when he and others saw police enter the campus, they walked toward them with their hands up to indicate the protest was nonviolent.

"The police made all 15 of us kneel and started beating us. They used lots of abusive words. One of them removed my prescription glasses, threw (them) on the ground, broke them and told me to look down," Mojibi said through tears at a news conference.

Shahid Hussain, a 25-year-old history major, said police broke windows in his dormitory and lobbed a tear gas canister inside. After fleeing the building to escape the fumes, police pushed him against a tree and beat him with sticks, he said.

The police response to the protests has drawn widespread condemnation. It also has sparked a broader movement against the Citizenship Amendment Act, with demonstrations erupting across the country.

The new law applies to Hindus, Christians and other religious minorities who are in India illegally but can demonstrate religious persecution in Muslim-majority Bangladesh, Pakistan and Afghanistan. It does not apply to Muslims.

While it was being debated in Parliament, Home Minister Amit Shah said it was "not even .001% against minorities. It is against infiltrators." Modi told an election rally in eastern Jharkhand state that no Indian citizen would be affected by the law. Speaking about Sunday's protests, he accused the opposition Congress party of using students for political purposes.

"The decisions made by the government should be discussed and any voice should be raised in a democratic manner. This government understands your concerns but some people use your shoulder for firing a gun," he said. "I dare Congress, its friends, to publicly declare they are prepared to accord Indian citizenship to all Pakistanis." 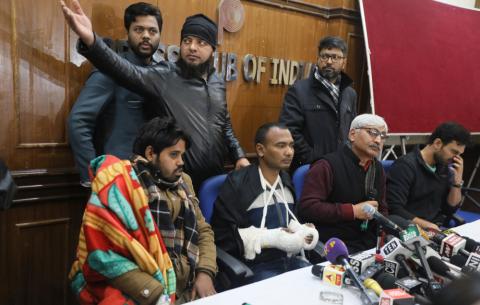 Jamia Millia Islamia University students, who were injured in baton charging by police, address a press conference in New Delhi, India, Tuesday, Dec. 17, 2019. Students involved in a massive weekend protest at a predominantly Muslim university in India's capital described a clash with baton-wielding police at a news conference Tuesday, while opposition grew nationwide against a new law that provides a path to citizenship for non-Muslim migrants.(AP/Manish Swarup)

Congress party chief Sonia Gandhi met President Ram Nath Kovind as the head of an opposition delegation and asked that the citizenship law be withdrawn.

Talking to reporters, Gandhi said she fears "the situation may spread further."

"I think you all have seen that the Modi government seems to have no compassion when it comes to shutting down people's voices and implementing legislation," she said. Critics of the government say the law is intended to help the ruling party transform a multicultural and secular India into a Hindu "rastra," or distinctly Hindu state and further marginalize India's 200 million Muslims, one of the largest Muslim populations of any country in the world."

India is 80% Hindu and 14% Muslim, which means it has one of the largest Muslim populations of any country in the world.

"We found out that the arrested men had instigated the crowds and were also responsible for vandalizing public property," Randhawa said.

Students said police lobbed tear gas inside the campus, broke down the doors of the library and yanked students out to assault them. Dozens of students were treated at hospitals.

Police said they acted with restraint.

Nearly 2 million people in Assam were excluded from the list, about half Hindu and half Muslim, and have been asked to prove their citizenship or else be considered foreign. India is building a detention center for some of the tens of thousands of people the courts are expected to ultimately determine have entered illegally.

Shah, the home minister, has pledged to roll out the program nationwide, promising to rid India of "infiltrators."

The Citizenship Amendment Act could provide protection and a fast track to naturalization for many of the Hindus left off Assam's citizenship list, while explicitly leaving out Muslims.

The backlash to the law came as an unprecedented crackdown continued in Kashmir, India's only Muslim-majority area, which was stripped of special constitutional protections and its statehood in August. Since then, movement and communications have been restricted.

"Our country is not just for Hindus," said Chanda Yadav, 20, a Hindi literature student who was participating in a sit-in Monday at Jamia Millia Islamia University. "I feel it is my moral right to protest against something which divides us as a community."